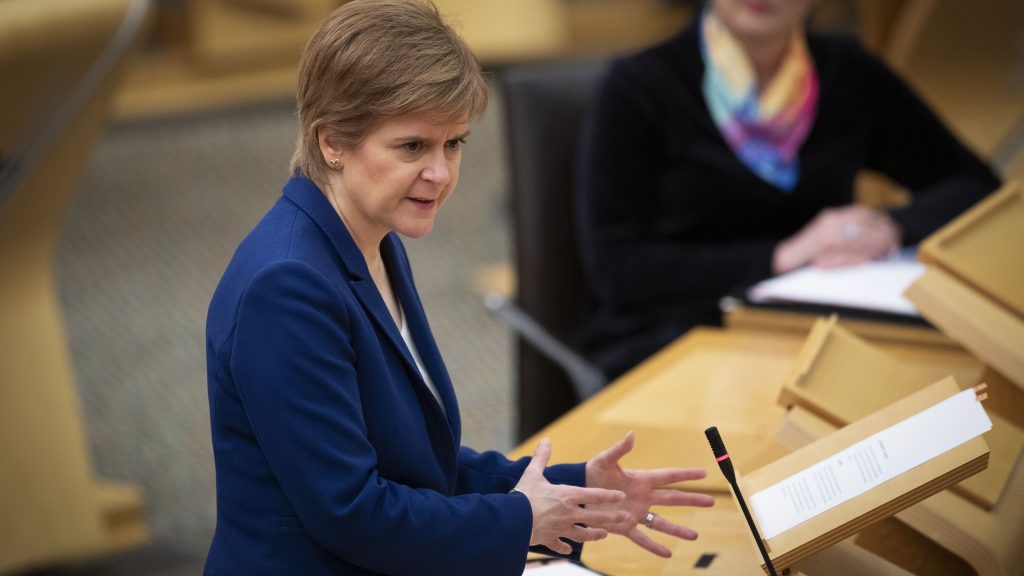 Nicola Sturgeon has vowed to tackle transphobia within the SNP if it exists, insisting she takes on “bigotry” whenever she encounters it.

She was asked during First Minister’s Questions on 28 January whether her government has broken its promises to transgender and nonbinary people. It came after she tweeted a video message on the issue, following reports of significant numbers of people leaving the SNP because they do not consider it to be a safe and tolerant place for trans people.

In the message posted on Wednesday evening, which she said was not scripted but “comes from my heart”, Sturgeon said she does not care if people accuse her of being woke and there should be a zero-tolerance approach to transphobia.

A message from me as @thesnp leader on transphobia. pic.twitter.com/ewjM7xWLjG

Following that statement as a party leader, does she think the same message and the same commitment is needed from her as First Minister for the actions and inactions of the Scottish Government?

Does she regret that promises made to trans and nonbinary people to make their lives easier, to improve their healthcare and uphold their rights, were broken – and transphobia in Scotland has grown far worse as a result of the Government’s failure to act?

I actually think this is something all of us have a duty to speak out on. I’ve got a duty and a responsibility to tackle transphobia if it exists in my own party, I’ve got a duty as First Minister to make sure that the Scottish Government enhances and protects the rights of trans people.

But I don’t think there is anybody across this chamber in their own organisations or in terms of Scottish society as a whole who can sit back and sit on their laurels here.

Sturgeon said she is a “lifelong feminist” who has, like many female MSPs, faced vile misogynistic attacks every day. She continued:

But as a woman, I know the threat to my safety comes from abusive men, it’s not from trans women. I recognise the concern that abusive men will exploit trans rights to harm women and we’ve got to address that.

I, as the First Minister, as leader of the SNP and just as a citizen of this country, will stand against prejudice, discrimination and bigotry whenever I encounter it.

In her video message, Sturgeon said she was saddened to hear younger members are leaving because they feel the SNP is no longer a tolerant place for trans people.

Five years ago election promises were made to trans and nb people by all 5 parties at Holyrood. Those promises were broken. This message is welcome, even coming late, but it must be followed by action. And yes, this applies to all parties, right across the political spectrum. https://t.co/ouztOpYhBD

It comes amid a heated debate within the SNP on the controversial issue of gender recognition, with some in the party strongly opposed to moves by the Scottish government to make it easier for people to legally change their gender identity. The issue arose after the Scottish government put forward plans to legislate on gender recognition reform, which would have eased the process of legally changing gender identity.

The plans, which were scrapped last year after the coronavirus (Covid-19) pandemic hit, would have meant trans people could receive a Gender Recognition Certificate through self-declaration after six months, rather than requiring medical evidence and a two-year period of living as that gender under the current rules.

SNP MP Joanna Cherry had been a high-profile critic of the planned reform. But with the debate over trans rights raging within the party, some members have been leaving.

Academic Rayya Ghul tweeted that the “SNP’s lukewarm stance on trans rights and apparent unwillingness to stamp out transphobia in its ranks has left me disappointed and at times, disgusted”.

However, the SNP’s lukewarm stance on trans rights and apparent unwillingness to stamp out transphobia in its ranks has left me disappointed and at times, disgusted. 2/4

Ghul said she “wouldn’t support a party which allowed open racism” and could “not support one that won’t stand up against transphobia” – adding that as a result she is giving up her membership.

Thank you this is real leadership and obvious you’re speaking from the heart. We really appreciate you speaking up and hope appropriate action is taken too. As a trans person my desire to leave Britain grows stronger every day, a predicament with which you’re no doubt familiar 😂

Katy Montogmerie drew attention to some of the controversy surrounding Cherry:

For anyone wondering why SNP politician Joanna Cherry is trending, it's for her support, both in words and financially, of someone who ran a campaign called #SayYesToHate on Trans Day Of Remembrance, and is now defending their antisemitism the day before Holocaust Memorial Day https://t.co/H3UChOFb17

I have a lot to say and I’ve already said a lot (totally unlike me ik…). But for now I stand as a firm trans ally. I could no longer morally justify staying in a party that has become a breading (sic) ground for bigotry.