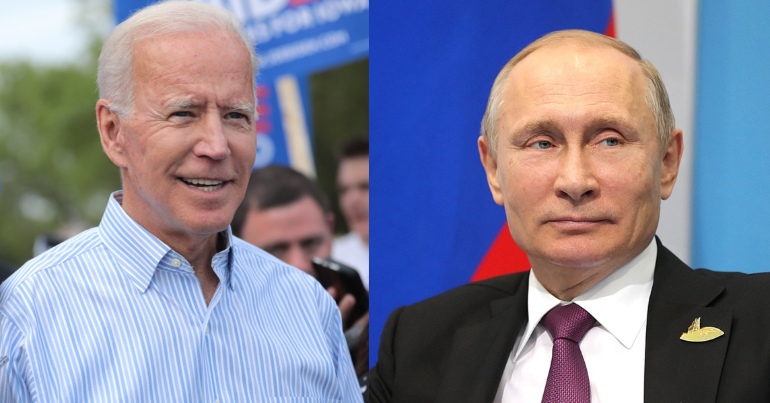 Newly elected US president Joe Biden had a phone call with Russian premier Vladimir Putin on 26 January. Much of the call’s items were fairly predictable – there were discussions about the Start treaty and how the US and Russia could improve relations going forward.

But the corporate-owned media has been glossing over one major piece of hypocrisy. It seems to be repeating unchallenged Biden’s implication that Russia has all the answering to do when it comes to electoral interference. But the reality is that it’s the US that has been the most flagrant offender when it comes to meddling in other countries’ elections. The corporate-owned media needs to be called out for failing to address this brazen hypocrisy in Washington’s narrative.

The major points of contention

On 26 January, the White House released a statement saying that Biden had his first call with Putin since taking office on 20 January. The BBC reported that discussions included the recent anti-government protests that have been raging across Russian cities as well as an agreement to extend the last remaining nuclear agreement between the two nations. Known as the New Start treaty, the accord was implemented during Barack Obama’s presidency and “limits the amounts of warheads, missiles and launchers in the two countries’ nuclear arsenals”, according to the BBC report.

However, the point of debate that attracted the most attention was Biden’s warning to Putin over alleged Russian meddling in US elections. Biden claimed that Russia attempted to influence the 2016 and 2020 US presidential elections and also implied that US elections are under threat of Russian cyber espionage. The corporate-owned media has largely repeated these claims unchallenged, but the reality is that claims of Russian electoral interference have been overblown.

As The Canary has previously reported, an academic expert on electoral interference has pointed out that it is, in fact, the US that has been the major election meddler in the post-war era. Political scientist Dov Levin points out that the US has meddled in over 80 elections in 47 different countries since World War II.

When it comes to Russia, on the other hand, evidence of electoral meddling is far less substantial. Though Levin concedes that there is some evidence that there might have been some small-scale interference by Russia in the 2016 US presidential election, he adds that this is fairly moderate when compared with other cases. Moreover, according to the Senate Intelligence Committee’s Russia report:

The Committee has not seen any evidence that vote tallies were manipulated or that voter registration information was deleted or modified.

And in a cruel irony, the US’s illustrious record of election meddling includes interfering in the 1996 election in Russia to help its favored candidate, the pro-Western Boris Yeltsin.

Propping up one of Russia’s worst-ever leaders

Yeltsin was actually languishing in the polls at below 3% approval and in third place behind the Communist Party candidate Gennady Zyuganov and ultra-nationalist outsider Vladimir Zhirinovsky. Zyuganov, who was not proposing an all-out return to the Soviet era but rather a more moderate and democratized form of socialism, was on track to win an election landslide. But the US lobbied the IMF to give Russia a huge loan (then the second largest in its history) so that Yeltsin’s government could pay salary arrears for public sector employees, as well as splash on some public support courting spending sprees. Washington also provided him with advisors to professionalize his electoral campaign.

As The Canary has also reported, at the US’s behest, Yeltsin introduced a disastrous string of neoliberal measures, which created a highly unequal society and the rise of a small group of ultra-wealthy oligarchs. As a result, Yeltsin has remained a despised figure among ordinary Russians long after his presidency ended.

Back-pedaling on Trump’s one good move

Biden also reportedly indicated during the call that he would take a tougher stance than his predecessor Donald Trump, who was conciliatory with the Russian president. But here also the corporate media has failed to add nuance. As The Canary has also previously argued, Trump’s admission in 2018 that the US has itself been largely responsible for the cooling of relations with its former Cold War adversary should be welcomed. Because during the presidencies of both George W. Bush and Barack Obama, NATO presence in Eastern Europe expanded eastwards toward Russian territory. During the Obama presidency, in particular, US-led NATO troops gained an increasing foothold along the Russian border.

Clearly, the corporate-owned media is taking a brazenly pro-US line at a time when Washington’s actions need to be held to particularly strong scrutiny. After all, Biden was the preferred choice of the traditional Washington foreign policy establishment. Former staffers of George W. Bush mobilized behind his campaign and he even received an approving nod from the godfather of US interventionism himself, Henry Kissinger.

This lack of critical analysis highlights the heavy burden that falls on independent media to provide some semblance of counter-balance to Washington’s duplicitous narrative and the corporate media’s shameless ventriloquism act.