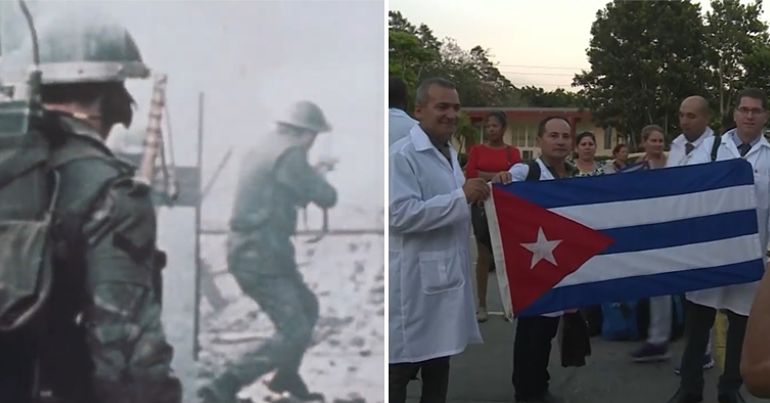 On 28 January, independent councillor Gary Donnelly will request help from the Cuban government to deal with the coronavirus (Covid-19) crisis. Alongside councillors Sean Carr and Paul Gallagher, Donnelly will propose a motion to Derry City and Strabane District Council inviting Cuba’s Henry Reeve International Medical Brigade (HRIMB) to the region to fight coronavirus.

We will make the proposal and if passed council will contact them seeking assistance.

That this council immediately contact the Cuban government and seek assistance from the Henry Reeve International Medical Brigade in efforts to combat the crisis caused by Covid 19 in the Derry City & Strabane District Council area.

The coronavirus crisis in the north

This pandemic has taken its toll on people and put huge strain on health services in the north of Ireland. In just one day in September 2020, 424 people tested positive. Between 9 and 15 January 2021, 156 people died. A total of close to 1,800 people have died already. These numbers are stark as its population is just over 1.8 million.

The political response to the pandemic has led to criticisms of the government’s response. And despite freedom of movement to and from the Republic of Ireland, there appears to be different responses north and south of the border.

Bring in the troops?

In January this year, the North’s health minister Robin Swann again stated he’ll use the British army to alleviate the situation. However, the north is a divided society. And Swann’s suggestion comes as Derry city commemorates Bloody Sunday on 30 January 1972. British troops shot dead 14 innocent protesters that day.

So alternatives are being sought that do not involve the army.

HRIMB has experience fighting this pandemic across the globe. Cuba has sent health workers from HRIMB to “Latin America, the Caribbean, Europe, Africa, and the Middle East”. The Council on Hemispheric Affairs (COHA) has formally nominated HRIMB for the 2021 Nobel Peace Prize.

Derry City and Strabane District Council had already supported a motion calling for HRIMB to be nominated for the prize.

Cuba has an excellent record of Medical Internationalism – which has seen dozens of medical missions dispatched overseas to support humanitarian efforts in the wake of all forms of natural and man-made disaster.

The proposal would seek to invite the Brigade to Derry to support local Health Care staff and officials in whatever role is most appropriate.

The proposal would seek to mitigate any concerns that health care workers may have of working alongside the British Army (regardless of their designation).

It is our understanding that these concerns are very real and not insignificant – and that many workers (as well as unions) are upset that they were not consulted in any way in relation to the current situation. As you know a senior Cuban diplomatic contingent visited Derry in 2018 and excellent link[s] have been made (particularly within the community sector).

We believe that there is an excellent chance that an invite would be welcomed by the Cuban Authorities. We believe that should this new proposal carry the district should avail of the support of the Cuban doctors, nurses and medical staff.