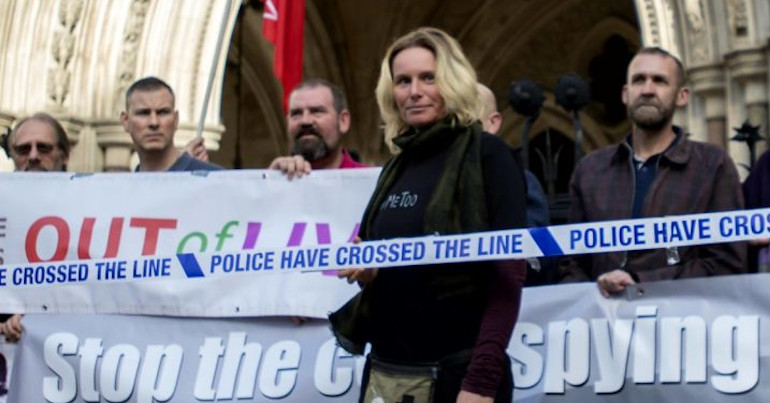 Activist Kate Wilson has finally won compensation after winning a tribunal case against the Metropolitan police for breaches of five of her human rights. The compensation amount granted is £230,000, including payment of legal costs.

In 2003, Wilson was tricked into a relationship with an undercover police officer who called himself Mark Stone. They lived together as lovers for two years. He deceived her and numerous others he became friends with, hiding his real identity as a police spy. In fact, he had relationships with as many as ten other women in the seven years he was undercover. Wilson was also spied on by at least five other undercover police officers, emphasising the terrifying lengths that the police will go to in order to keep tabs on their population.

In 2010, Wilson discovered Stone’s true identity. He was a married police officer called Mark Kennedy who had been sent to spy on activists. Kennedy infiltrated a number of protest groups and gatherings in the UK and across Europe, including Climate Camp, Earth First, and animal rights gatherings.

Over 30 women now know that they were deceived into intimate, sexual relationships with undercover officers. Many more people were subjected to similar infiltration by undercover officers. What happened to me was by no means unique, and hundreds of people will have had their rights violated in this way.

Of course, Wilson’s case is yet another example of misogyny that is rife in the British police, and their complete disregard for women as they go to any lengths to spy on activists.

Spying on activists all over the country

Hundreds, if not thousands, of activists and campaigners have been spied upon by the British police over the years, including the family of eighteen-year-old Stephen Lawrence, who was murdered while waiting for a bus in Eltham. An inquiry into undercover policing is ongoing. There are more than 200 participants who were spied upon taking part in the inquiry.

The police have been doing all that they can to obstruct the inquiry while protecting the anonymity of police spies. The inquiry started in 2015, yet seven years later, the majority of core participants have not seen a single shred of evidence over why they were spied on. For some, it may be another two years before they finally get to see their files.

Wilson is keen to stress that her compensation was awarded because the police breached her political rights to freedom of expression and freedom of association. This was never just about institutional misogyny: it’s also about the basic rights of the whole population being violated. Wilson said:

It is compensation for the parts of the claim that the police denied right up to the end: how complicit Mark’s managers were, and the role of 5 other undercover officers in violating my political rights, and the fact that they dragged out those denials for 10 years.

The finding that these operations breached the rights to freedom of expression and assembly and were unlawful amounts to a long overdue recognition that spying on protest movement is political policing and has no place in a democratic society. It is important, because it goes beyond the scandal of undercover officers deceiving women into intimate relationships. Violating our political rights was the entire reason for these deployments and thousands of people will have had their political rights violated in this way.

‘Jane’, who was also spied upon by Kennedy, said:

For over 50 years, movements such as those against apartheid, racial injustice, and climate change have been infiltrated with impunity, with undercover officers sent in on long-term fishing expeditions. The rights to freedom of expression and assembly and the right to a private life, of anyone taking political action, was considered fair game.

As an environmental campaigner, I did not think it possible that my close friend, and sometimes housemate of seven years could be an undercover police officer. It felt instinctively abusive, and a big step too far for the state to do this to us. We have now been vindicated by the IPT which recognises this abuse of our human rights, and our democracy.

Human rights organisations have pointed out that:

And if that isn’t horrific enough, the new Police, Crime, Sentencing and Courts Bill, which is passing its final phases in parliament, will give the state extensive new powers. Campaign group Police Spies Out Of Lives argues that Wilson’s win is extremely important, as the tribunal found that the police breached Wilson’s political rights to freedom of expression and freedom of association. The group says:

With protest rights under attack by the introduction of the Police, Crime, Sentencing and Courts Bill, these findings have enormous contemporary significance.

Indeed, when the police bill becomes law, a raft of new protest measures will be introduced. Offences such as tampering with a statue could lead to prison sentences of up to ten years. Additionally, the prospect of up to a decade in prison for causing “serious distress, serious annoyance, serious inconvenience, or serious loss of amenity” will come into force. We’re likely to see a big change in the policing of protests, much more harassment by the police, especially around stop and search. Potentially more serious charges for protest offences could also lead the police to try to justify more undercover cops in our movements.

So let’s celebrate Wilson’s win, but be under no illusion that this will stop the state from continuing to pass its draconian new bill, or stop it from spying on members of the public.

Featured image via David Mirzoeff/Police Spies Out of Lives