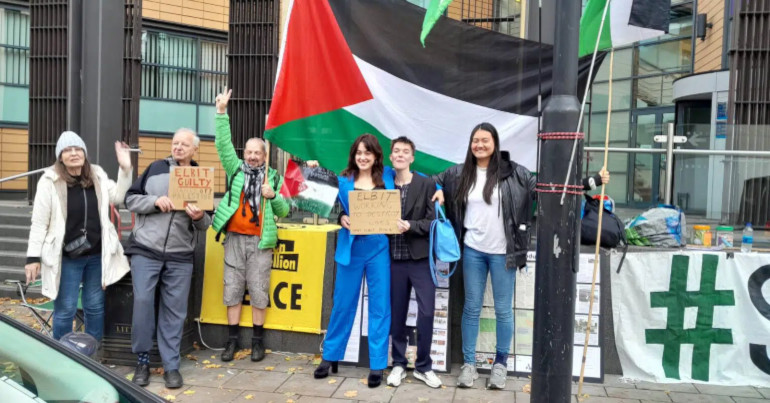 The case against three Palestine campaigners at Bristol Magistrates Court collapsed on 17 October.

They were accused of aggravated trespass after they scaled the roof of the Bristol premises of Israeli drone makers Elbit Systems in November 2021, on the anniversary of the signing of the Balfour Declaration.

Protesting Britain’s role in the colonisation of Palestine

The Balfour Declaration is the name given to the statement made in 1917 by British foreign secretary lord Balfour. It promised to ‘establish’ in Palestine a “national home for the Jewish people”. Britain had taken control of Palestine after the collapse of the Ottoman Empire. And that “national home” was to be created at the expense of the indigenous Palestinian population.

According to the campaigners’ statement at the time of the action:

[The] 67-word document presented by Arthur Balfour in 1917 paved the way for the ethnic cleansing of Palestine and the violent dispossession of 750,000 Palestinians —more than half the indigenous population. This event is known as the Nakba, which directly translates into English as the ‘great catastrophe’.

The rooftop action was also part of a campaign against Elbit Systems. Elbit is Israel’s largest private arms manufacturer and produces up to 85% of Israel’s drones. These drones have massacred Palestinians in Gaza. The company is also responsible for manufacturing small-calibre ammunition for the Israeli army. Direct action campaigners are therefore trying to force Elbit out of the UK.

A long succession of failed prosecutions

The case of the three rooftop occupiers fell apart after District Judge Mark Wattam ruled that the Crown Prosecution Service (CPS) had failed to prove two parts of its case. He ruled that there was, in fact, ‘no case to answer’.

The campaigners were charged with aggravated trespass, which means they were accused of disrupting lawful business. However, the judge ruled that there was no evidence to prove that the campaigners disrupted Elbit, or that the company’s business was lawful.

The trial of the ‘Bristol 3’ is one of a long list of cases against anti-Elbit campaigners where the state has failed to secure a conviction for similar reasons. The common thread throughout these cases has been that Elbit has not provided evidence to prove that what it does is lawful

In 2015, a case against nine protesters collapsed after defence lawyers asked for the disclosure of arms export licenses. Neither Elbit nor the UK government supplied them, and the court ruled the case shouldn’t go forward.

Since then, Elbit, the CPS, and the campaigners have been at a stalemate. An onslaught of direct action against Elbit has closed down two of the company’s premises in the UK. But the state has failed to successfully prosecute people for actions at Elbit sites (although one person was convicted for an action against Elbit’s landlord in March).

In December 2021, a group of three people were found not guilty of criminal damage when they appeared in court. This was after they threw red paint over Elbit subsidiary UAV Engines in Shenstone.

Then in September 2022, the charges were dropped against five people accused of aggravated trespass and criminal damage, again at Elbit’s Shenstone site.

Many Elbit cases have been being postponed again and again too. Palestine Action commented that:

The persistent postponement of hearings and trials is not unfamiliar to the direct action network, oftentimes owing to Elbit’s inability to prepare sufficient evidence to prosecute or refute the claims made against them.

The state also uses the postponement of trials as a power and control tactic. It leaves people hanging – sometimes for years – with the threat of a case over their heads. And postponement often comes with restrictive bail conditions. This limits campaigners’ freedom as well as their ability to be involved in further direct action.

These cases shouldn’t act as a fig leaf

Campaigners are having some success in avoiding prosecution for direct action for Palestine. However, that doesn’t mean we should have any illusions at all about the rotten Criminal Justice System (CJS)

Last week, I wrote that the CJS:

is a tool created by the state to enforce repressive, racist and classist laws. From my own personal experience, class often plays a key role in jury verdicts, defendants who can pass as middle or upper class are more likely to be found not guilty.

In the case of Palestine and the arms trade the situation is a little different. All the same racial and class biases are still present, but the cause itself – seen through a human rights lens – is capable of being viewed as more ‘worthy’ by juries – and even to an extent by judges too. This situation is beneficial for the Palestine solidarity movement, but it should never be allowed to obscure the massive suffering caused by the entire CJS

The case in Bristol wasn’t a jury trial, but the point remains the same – we shouldn’t allow the acquittals in these specific cases to change our perceptions of the system as a whole. It is rotten to the core.

Palestine Action has accused the British state of engaging in “lawfare” against them by using restrictive bail conditions to control campaigners. The state is also using ever more outlandish charges against Palestine campaigners. These include conspiracy to blackmail and ‘unlawful imprisonment’ of Elbit’s employees. Anti-Elbit organisers have had their passports confiscated, their houses raided, and been stopped under the terrorism act at UK borders.

The Palestine Action campaign reflected on the charges of ‘unlawful imprisonment’:

Such spurious allegations only demonstrate to what lengths Britain’s so-called justice system will go in order to supply the illegal Israeli military occupation and grease the machinery of the global weapons trade. And, as with all Palestine Action’s legal cases, the desperation of the British state to prevent people from standing with Palestine, and the fragility of Elbit Systems, is once again on display.

Acts of lawfare such as this are characteristic of the British State and its ongoing commitment to enabling Israel’s violent domination over Palestine, a process that began in 1918 with the Balfour Agreement. Today, this includes the criminalisation of British citizens should they challenge the existence of the Zionist entity. For Palestine Action this simply illustrates what was already known: concrete action and transnational solidarity are tangible threats to, and immensely feared by, the Apartheid State, because its existence relies upon international complicity.

Those in court deserve our solidarity

Next month, six people are due to stand trial. They’re accused of unlawful imprisonment and causing £50k of damage to Elbit’s Shenstone site. The charges against them are serious, and they are calling for support.

The people of Palestine have been asking for international supporters to take direct action against companies complicit in the Israeli state’s militarism and colonialism for many decades. The campaign against Elbit is an important act of solidarity with the Palestinian struggle. If it is to be successful, we need to support the people who the state is trying to criminalise, both for standing with Palestine and against the arms trade.