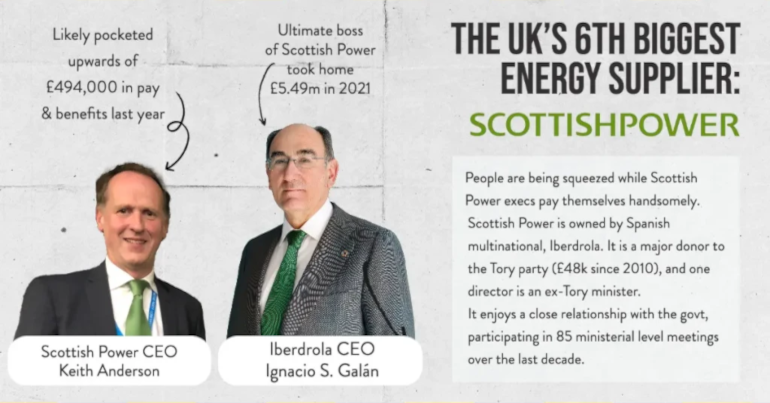 With all this talk of the rising cost of oil and gas, you might be excused for thinking that the companies supplying our energy are struggling. However, according to anti-capitalist research group Corporate Watch utility company bosses are still raking it in.

The continued profits for these bosses are in stark contrast to the situation for energy consumers, who saw energy bills rise yet again at the beginning of October. Thousands of us are in fuel poverty as a result.

Scottish Power – owned by Spanish multinational Iberdrola – doesn’t appear to be suffering as a result of the cost of living crisis. Corporate Watch wrote:

In 2021, as the cost of living crisis began, company top brass collectively paid themselves almost £10m, and Scottish Power paid the Iberdrola corporate group over a billion pounds. Iberdrola’s CEO’s salary was at least £5.49m, and Iberdrola shareholders were paid hundreds of millions in dividends.

Scottish Power’s highest paid director – likely to be CEO Keith Anderson – received £425,000 (up from £383,000 the previous year) in pay, as well as £69,000 in pension benefits in 2021, in addition to share benefits. In total, Scottish Power’s directors received £1.05 million in pay, an increase from 2020. When share-based payments are included, the 15 key management personnel received a total of £9.8 million…

Today, Joe Glenton reported for the Canary that Shell made £8.2bn profits last year, and still received a UK tax rebate. These two examples show clearly how the UK government enables soaring corporate profits, while we are told to tighten our belts.

Meanwhile, Scottish Power’s customers are struggling to pay their bills, and the company is trying hard to get as much out of them as it can.

Scottish power was warned by energy regulator Ofgem in September about its “failure to protect customers” who fall into energy debt. Ofgem ordered Scottish Power to:

Scottish Power has been heavily criticised for the way it forces customers to install prepay meters, when they fall into debt. Corporate Watch wrote:

Energy companies can apply to have a pre-pay meter installed if people fall into arrears, but they are not supposed to do it if customers are ‘vulnerable’. Scottish Power customer James Collins told iNews that the company had forcibly installed a pre-pay meter at his home despite him telling them that he had diabetes, and that he needs a consistent power supply to keep his insulin refrigerated.

Internationally, Scottish Power’s parent company has been involved in multiple scandals, including appearing in the Spanish high court over allegations of corporate espionage. Iberdrola has several businesses registered in the US tax haven of Delaware.

Cosying up to government

Scottish Power protects its position and its profits by cosying up to the UK government. The company has had at least six meetings with British Prime Ministers over the last ten years, and 85 meetings with ministers.

The company has donated £48k to the Conservative Party since 2010, and paid thousands to sponsor receptions at both the Labour and Tory party conferences in 2021.

Claire O’Neill – one of Scottish Power’s directors – has a long history as a Tory politician, which means the company is likely to retain close links to the UK’s Tory government.

While we’re struggling to make ends meet and pay the bills this winter, it’s important to remember that we’re categorically not ‘all in this together’. Company directors and the political class are getting richer at our expense.

230,000 people have pledged to go on strike, and not pay their energy bills in a campaign to force the government to reverse the energy price hikes, initiate a social energy tariff, and end the forcible installation of prepay meters. The strike is scheduled for 1 December. You can read about their campaign here.

Tom Anderson is part of the Corporate Watch Cooperative