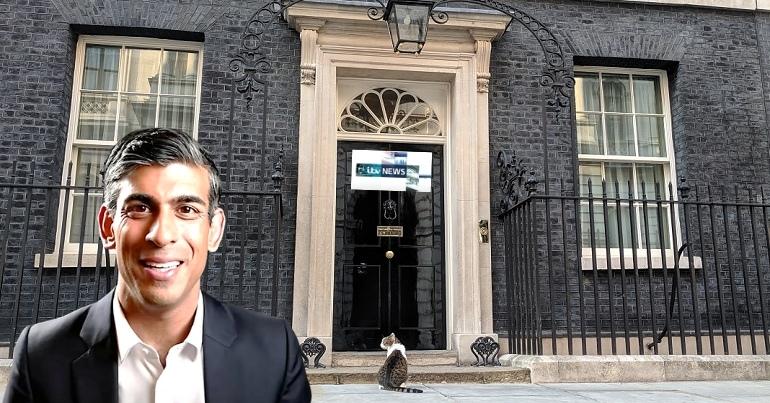 Rishi Sunak has just made an ITV News journalist his new director of communications. It should be a shocking story: allegedly impartial journalist goes through the media-government revolving door and comes out biased. However, it’s not shocking at all, because it’s repeatedly happened in the past.

Moreover, the situation shows that even when the government has extreme right-wing leanings, the UK corporate media is still in bed with it.

Sunak has a new comms director

However, Sunak has now poached her to work for him. ITV News‘ political editor, Robert Peston, broke the story via Twitter of all places:

My colleague Amber de Botton is leaving ITV to be @RishiSunak’s director of communications. She is a brilliant news editor and journalist, and leaves a huge hole at @itvnews

Other corporate journalists toed a similar line to Peston – not seeing that there was a problem with the situation. Sky News political editor Beth Rigby tweeted:

Many years ago @amberdebotton got me into TV news @skynews. It was a huge loss to Sky’s political unit when she joined ITV News. She’s a seriously talented news editor & political operator, now heading to No 10 to direct PM’s communications strategy. They mean business. https://t.co/IGFoOxBrs2

Of course, there is a major problem with Sunak making de Botton his director of comms – as people pointed out on Twitter.

The “revolving door” between media and government

The Canary’s Amplify participant Claire Higgins pointed out that there’s a “small pool” of people in the UK who work in government and media. She noted that Peston didn’t seem to see the problem with this:

The revolving door of UK journalism & UK Government. How do you expect us to believe you hold power to account?

But what about you? Will the Tories also reward you for being so good for them?

There are some political undertones in the story too, as de Botton’s team at ITV News broke some of Boris Johnson’s ‘partygate’ scandal – which has ultimately paved the way to Sunak becoming PM. Even putting this aside, the PM giving an ITV News journalist his top comms job stinks.

You’re all far too close to government. You have this fantasy of speaking truth to power and holding it to account but in reality it’s client journalism. Amber brings you a step closer, she’ll be feeding you the party line first and you’ll call it a scoop.

As the Canary previously reported, “client journalism” is where the government uses reporters for its own agenda. Former corporate journalist Peter Oborne said corporate media outlets:

yearn for privileged access… And they are prepared to pay a price to get it. This price involves becoming a subsidiary part of the government machine. It means turning their readers and viewers into dupes. This client journalism allows Downing Street to frame the story as it wants.

Then, governments reward client journalists by giving them jobs in government. We saw this with Johnson making former ITV journalist Allegra Stratton his director of comms – before she had to quit anyway over partygate. Tony Blair had former Mirror political editor Alastair Campbell, David Cameron had former News of the World Editor Andy Coulson, and Theresa May had former BBC journalist Robbie Gibb – who’s now back in charge at the Beeb, pushing Tory agendas on the party’s behalf.

One Twitter user called the situation “corrupt” and “totally rotten”. They’re not far wrong. There’s nothing impartial about the UK’s corporate media. It’s stuffed with servile journalists trotting out government agendas in the hope of getting their backs scratched – de Botton’s new job is just another in a long line of examples of this.