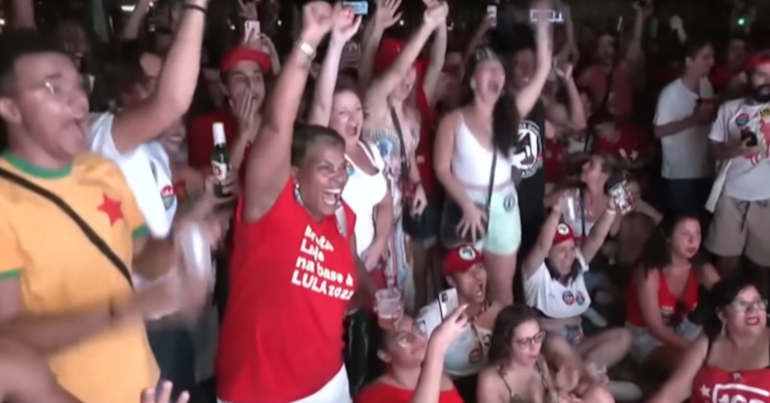 People around the world are joining Brazilians in celebration as they finally learn the outcome of the Brazilian election. There was a global sigh of relief as Luiz Inácio Lula da Silva, known as Lula, beat fascist Jair Bolsonaro by a narrow margin, securing 50.9% of the votes. He’ll begin his role in the new year. The victory came after reports of police trying to disrupt the election on the streets.

After his victory, Lula stated:

It wasn’t Lula against Bolsonaro, it was a campaign of democracy against barbarity.

The incoming president has already held the top job, ruling Brazil between 2003 and 2010, before corruption allegations put him in prison for 580 days. The Supreme Court later annulled the sentences.

I went through a political resurrection, because they tried to bury me alive.

Bolsonaro has, so far, remained silent about the result. In the run-up to the election, there were huge concerns that the president wouldn’t accept a defeat, as he attempted to cast doubt on the validity of the voting system by arguing that it was vulnerable to fraud.

Under Bolsonaro, Brazil saw the second-highest Covid death rates in the world. Just less than 700,000 Brazilians died of the virus. As Covid gripped the world in 2020, the president was criticised for repeatedly downplaying the severity of the virus, calling for the population to get back to work. At the time, he stated:

Also under Bolsonaro, 8.4 million acres of the Amazon were destroyed between August 2019 and July 2021. The main reason for this devastation was for beef production.

In the run-up to the election, the Canary’s Tracy Keeling reported:

The right-wing incumbent has overseen a wholesale assault on the vital biome since his election in 2018.

The scale of destruction is a result of the current president’s gutting of protections for the Amazon via rule changes and cuts.

People have, of course, taken to social media to express their relief at the result. One person tweeted:

For the FIRST time in history all major countries of Latin America have presidents from the Left, Mexico, Colombia, Argentina, Chile and Brazil. Great conditions to reinforce cooperation and links between the countries in the region. #Brics #Brazilelections #Brazil https://t.co/n9yC65LZ79

Today, we chose democracy. We chose life instead of violence, love instead of hate, books instead of guns. Today our lungs feel lighter, and we can breathe again. #LulaPresidente2022 #Brazilelections #obrigadanordeste pic.twitter.com/vSdVU5PZLu

Meanwhile, others have expressed a more cautious optimism. After all, Lula faces an uphill struggle. And while he’s a far better prospect than Bolsonaro, he is far from the ideal president. Journalist Jorge Martin tweeted:

Far right Bolsonaro's defeat and Lula's victory is being rightly celebrated in the streets. However a word of warning is necessary:
-Lula's runing mate is pro-business pro-austerity Alckim
– Bolsonaro's is the largest party in Congresspic.twitter.com/gj4CzRi3Ya

And another user said:

Bolsonaro out in Brazil! Lula's will be a government of crisis though, as you can see from this bit in the FT. Lula is under pressure from Bolsonaro supporters & bankers etc. Workers will need to put their own pressure through mass strikes & demos etc. Follow @EM_CMI pic.twitter.com/JnV3JdJrwK

The fight against the advances of the extreme right and fascism is not over. Let’s get ready for a long-term fight.

We know that the struggle against fascism is far from over. But as the world waits for Bolsonaro to concede defeat, we can cautiously celebrate the fall of another far-right leader.