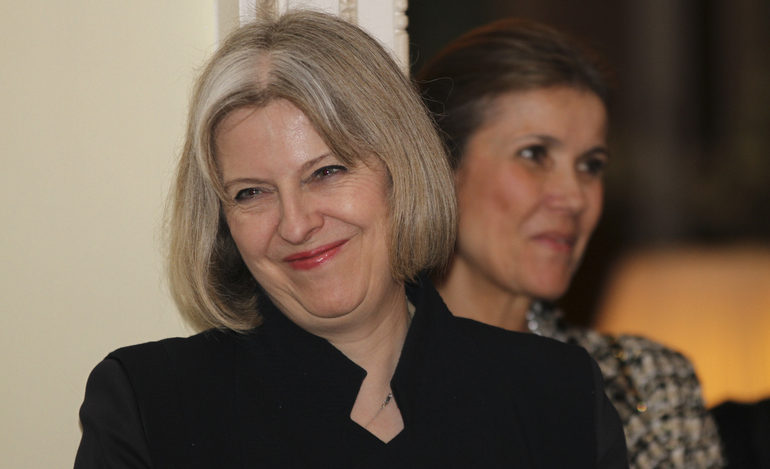 So far Theresa May’s election campaigning has consisted of saying almost exactly the same things almost all the time. While this may be a deliberate strategy, it’s also a handy way of dodging tough topics.

Climate change hasn’t been high on the Conservative agenda since May took office last year. In fact, it’s probably safe to say it’s pretty far down the agenda. So far down, in fact, that one of the first things she did was to disband the Department for Energy and Climate Change.

The energy brief is now shoe-horned into the Department for Business, Energy and Industrial Strategy (BEIS). Climate change is even more of an afterthought. It’s now lumped in alongside industry to Climate Change and Industry minister Nick Hurd’s remit.

This briefing [pdf] about the merger, released in July 2016, shows that climate change is consistently second to economic growth:

One of the main challenges in tackling climate change is to try to reduce carbon emissions without jeopardising economic growth.

May has been criticised from the beginning for her disregard of the subject. She gave climate change just a “cursory” mention in her speech at the last Tory party conference, mentioning “business” 14 times and “economy” 26 times.

That theme continues into the present.

Have you heard anything about the Tories’ environmental policy for the election? No? Well, that’s probably because they haven’t really got much of one. They’d much rather scrap subsidies for green energy and grant fracking licenses in national parks. Of course, you wouldn’t know it, because they bury controversial announcements in news about things they do want to talk about, like Brexit meaning Brexit and “strong, stable leadership”.

At least the Tories are consistent. They hide everything that they don’t want people to hear about. If it’s not about new fracking licenses, it’s about the ‘Tory dirty money’ scandal or MPs’ election expenses.

The latest thing the Conservatives are failing to discuss is how the UK will reduce its carbon emissions. This will be hard to achieve while the government is propping up ailing industries like coal with subsidies, a move the competition watchdog has warned against.

This shows the Conservatives’ true colours. They’ve cut funding for renewables, but lined the pockets of their pals in the fossil fuel sector.  This is despite the popularity of greener alternatives. The Conservative party really are the party of business.

If it’s not Brexit, then it’s the general election

The government is required to publish plans to demonstrate how it will meet the carbon budgets required by the Climate Change Act 2008. However, the release of the next Emissions Reduction Plan, also known as the Clean Growth Plan, has been repeatedly delayed. First the EU referendum got in the way, and then it was put off until February, and then March 2017. The reason for the latest delay is the snap general election announcement.

Speaking to the BEIS Select Committee, Hurd said the plan is in a “holding pattern”. He didn’t give any clear information about whether or not the plan would be released before the 8th of June.

Evidently, climate change is not quite as important to Theresa’s Tories as it was in 2010, when the Conservatives promised to be the “greenest government ever”.

Or perhaps May is just more honest about her priorities. Theresa May was clear from the start that she doesn’t give a monkey’s about climate change. David Cameron failed to turn his promise into reality because, after all, he’s a Tory. And of course, the Conservatives prioritise economic growth over everything else.