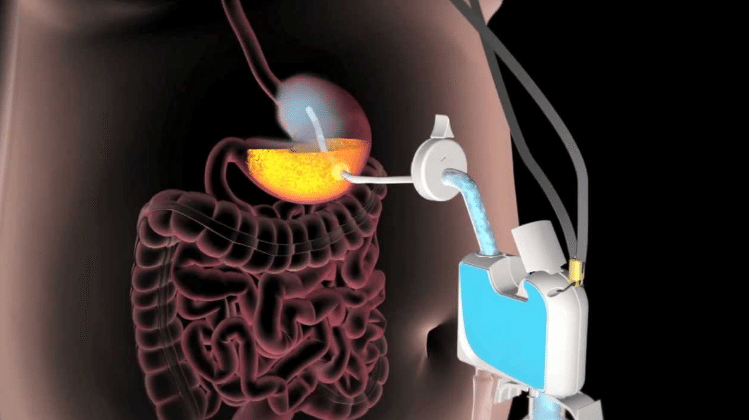 The US Food and Drug Administration (FDA) has approved a bizarre new weight loss device that allows obese patients to pump partially digested food directly out of their own stomachs and into the toilet as soon as they have finished eating, and it’s making medical experts queasy.

The device – named AspireAssist – is intended for adults that are severely obese and non-responsive to other measures. To fit a patient with the device, a surgeon must cut a hole into their stomach and insert the tube, which is attached to a “disk-shaped port that lies outside the body,” according to the manufacturer’s statement.

However, the grotesque way in which it works has caused experts to label it as “assisted bulimia” as it simply replaces one destructive food habit (0vereating) with another (purging).  Many experts have come out opposing the FDA’s decision, including Dr. Sajani Shah, bariatric surgeon at Tufts Medical Center, who told CBS News:

I heard about this device about a year or two ago at one of our meetings and I was shocked. It’s like giving someone bulimia… Basically, you can just vomit out [of] this tube.”

The Aspire device is an option that elicits a strong visceral response… The suctioned food, or sulcus, is similar to vomit. I think that this would be a deal breaker for most young active adults.

According to recent reports, a growing chorus of doctors are against this development, and one is even attempting to put together a list 4,000 physicians to sue the FDA on account of the device being unsafe and encouraging disordered eating.

Here’s a demonstration video of the device in action:

According to the FDA’s own warnings, patients are at risk of experiencing stomach pain, potential leakage, bleeding, indigestion, vomiting – even death – as a result of the device being fitted and used.

What’s more, there’s a notable disparity of information in terms of the side effects listed on the FDA website (which is very conclusive) and AspireAssist’s own site (which has a much shorter and less exhaustive list).

The FDA approved the device after reviewing results from a small clinical trial of 111 patients treated with AspireAssist and ‘lifestyle therapy’, together with 60 control patients who only had the lifestyle therapy. After a year, AspireAssist users lost 12.1% of their body weight compared to 3.6% for the control patients. The records suggest that the trial ends in 2020 however –  so it’s strange that the FDA should approve this so early, and with the caveat of so many risks.

It’s staggering that this treatment has even been considered for the FDA’s consideration – never mind being approved as it seriously undermines the work of doctors, dietitians and nutritionists in supporting patients in undertaking the real work in repairing their relationship with food.