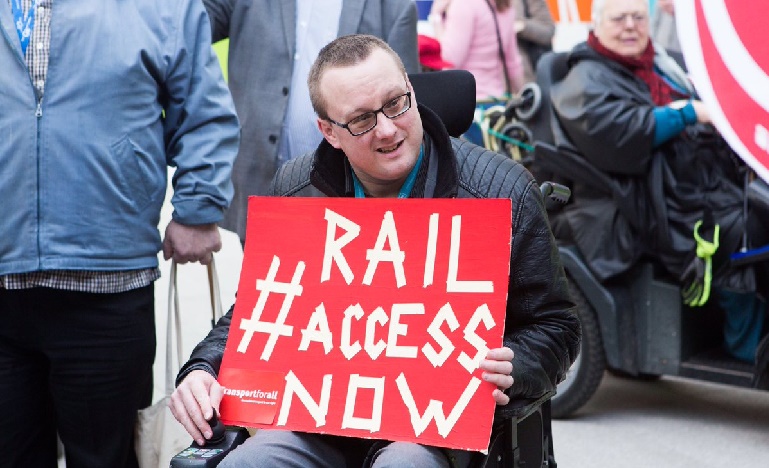 One man’s story of his commute to work has highlighted a major problem within the UK rail network. And it shows that, despite government claims, not everyone in the country has ‘access’ to public transport.

The campaign group Transport for All (TfA) has been highlighting the dire situation for disabled people on the UK rail network. It culminated on Wednesday 5 April with a protest at London Bridge station. And Dave McQurik’s story sums up the problems facing disabled passengers.

McQurik currently commutes from Farnborough West to London Euston. The line is operated by South West trains. And at Farnborough West, disabled passengers need a ramp to get on and off trains. But McQurik says that, despite using the Disabled Passenger Assistance Line to book support for his journey 24 hours in advance – every day, there was rarely any assistance there. On one such day:

The train arrived, the assistance didn’t. I couldn’t see the guard so stopped the doors from closing with my good leg. This led the guard to come and investigate why the doors weren’t shutting and he found me. He got the ramp out and I got on the train, only delaying it by five minutes or so… Over the next few weeks I found that this wasn’t teething troubles, this was standard service. After complaining to the train operator I found out that my station isn’t technically staffed, with one individual covering four stations so they may or may not be there depending where they’ve started that day.

More often than not, other passengers had to help McQurik by lifting his wheelchair onto the train. But he says:

South West trains have now put in various measures to make sure McQurik gets assistance every day. He still claims, though, that he only gets support around 60% of the time.

But his story is only one of many from disabled passengers. And the protest at London Bridge station on Wednesday aimed to highlight this:

Representatives from the Association of British Commuters (ABC) and Disabled People Against Cuts (DPAC) joined TfA: 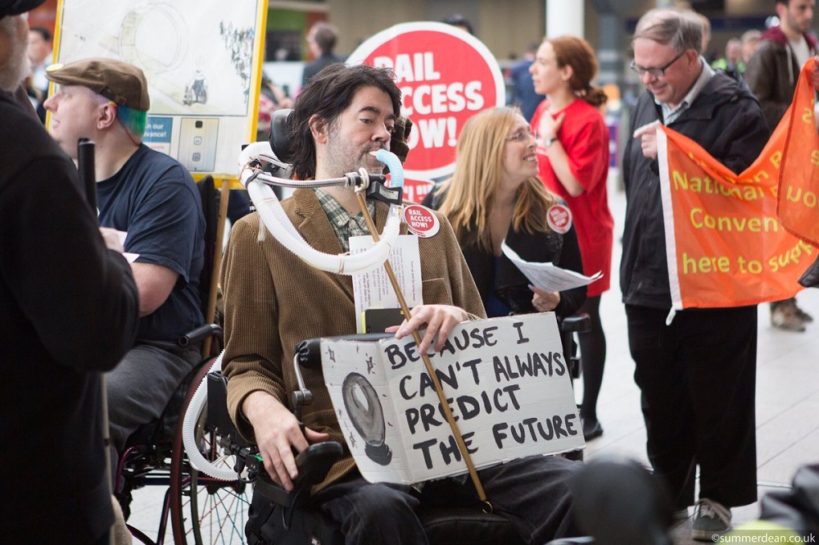 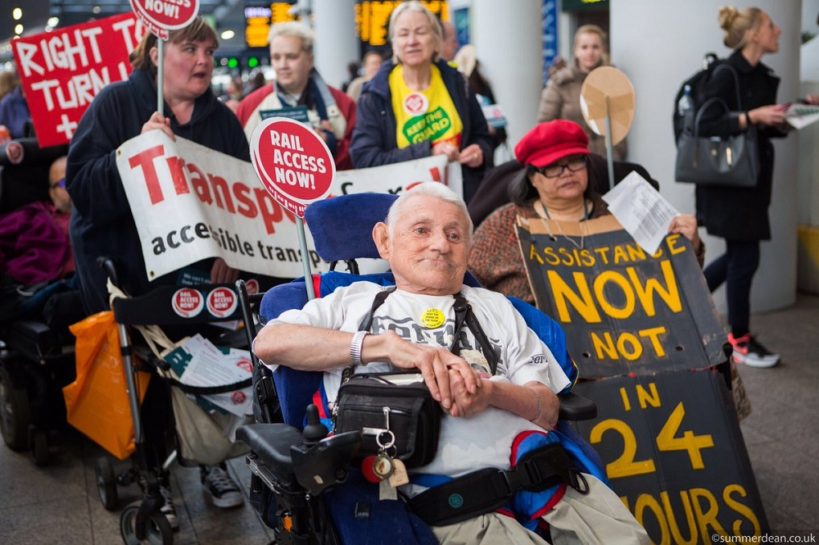 TfA has seven demands of the government:

As McQurik asks, why in 2017 does it still take all this effort just to get on a train to go to work? The answer to that is sadly a fairly simple one. Because we have a privatised national rail service, those operating the network are more concerned with profit than passengers. And, as is often the case, it’s disabled people on the sharp end of the drive to make money.

The Canary contacted South West trains for comment. It said:

We have had regular discussions with Mr McQuirk [sic] in recent months to try and find a solution to improve his experience whilst using our Assisted Passenger scheme and ensure journeys to Waterloo are as smooth as possible. We will continue to work with Mr McQuirk [sic] and all disabled passengers to get things right. Over two thirds of disabled passengers use accessible stations on our network and all of our guards are trained to provide assistance.

This article was updated at 12.15pm on Thursday 6 April to reflect a statement from South West trains.

– If you have problems with access on the rail network, tell TfA. Email [email protected]