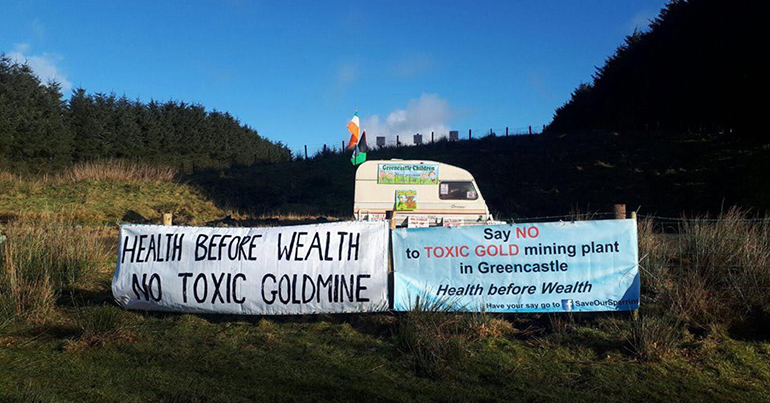 Dalradian Gold Ltd has applied to the Department for Infrastructure in Northern Ireland for permission to store and use sodium cyanide. Dalradian proposes storing and using the cyanide at a gold-mining processing plant in the Sperrin Mountains – an ‘area of outstanding natural beauty‘. But local residents who already oppose the gold mine are also opposing this latest application.

As The Canary previously reported, Dalradian applied for permission to mine the area for gold in November 2017. It plans to extract 6.1 million ounces of gold over the next 25 years.

Concerns over the gold mine are based on its potential environmental damage. A cyanide leak in Baia Mare in Romania in January 2000 wiped out 80% of the local fish population. Dalradian responded to this by stating:

It is impossible for such an incident to occur at Curraghinalt, County Tyrone as this approach has been eliminated through the design of the project.

Marella Fyffe from CAMIO (Cooperate Against Mining in Omagh) told The Canary she opposes the mine as an environmentalist. She believes it compromises the watershed because of the depth of the mine. Concern also comes from the high amounts of radon in the area; and Fyffe fears that, should this become airborne, “the very air we breathe will become contaminated”.

A number of safety incidents at the current exploration site also caused local fears to rise. Safety concerns were raised in early 2017 when personnel from Vertase FLI Limited, who were working at the mine, suffered serious injuries.

Local campaigners have established a protest camp near the site of the proposed mine. Other residents are taking a judicial review “to examine potential flaws in a pre-application consultation carried out by a gold mining company”.

The deadline for objections to this plan is Thursday 15 November 2018. So campaigners are encouraging people to write objection letters through their Facebook page.