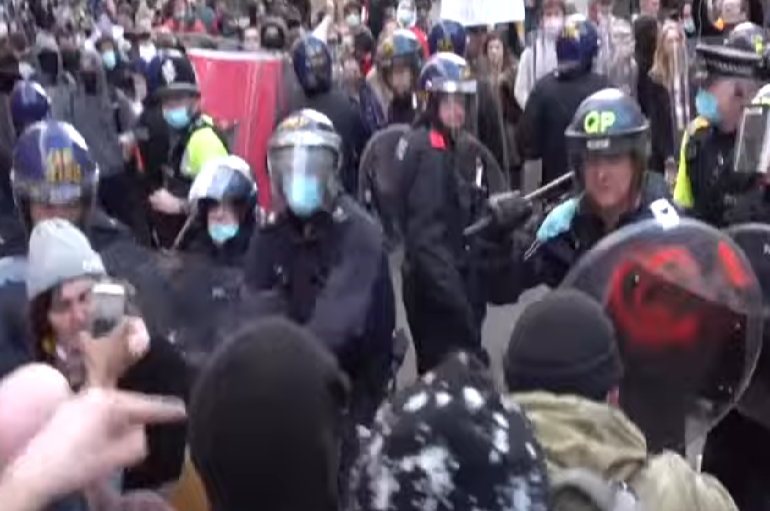 A jury at Bristol Crown court was shown footage of police officers hitting protesters outside Bristol’s Bridewell police station last year. The protesters included the defendant in the case – Jasmine York – who was hit repeatedly with a baton.

Jasmine is currently on trial at Bristol Crown Court charged with riot and arson; she denies both charges. If convicted, she could face years in prison. Jasmine is just one of 85 people who have been arrested for the events of 21 March. The prosecution began its case against Jasmine on 31 January.

Footage shown to the court showed police officers striking out numerous times at several protesters. One demonstrator is seen to be violently hit over the head with a rectangular police riot shield. This is despite the fact that one of the police witnesses confirmed that police guidance says that blows not should be directed toward the head or neck.

The case relates to the massive Kill the Bill demonstration on 21 March 2021. Thousands took to the streets to protest the government’s proposed Police, Crime Sentencing and Courts (PCSC) Bill. Clashes between the police and protesters at the demonstration ended with Bridewell police station’s windows being smashed, and three police vehicles being set alight.

The court heard how the police were taken by surprise by the size of the protest. PC Sean Oliver – giving evidence for the prosecution – said that as protesters were leaving College Green he “couldn’t see the tarmac” on the road because of the large numbers of people

The bill will “give more power to the state”

A statement – written in support of Jasmine – by Bristol Anti-Repression Campaign, explains the context of the protest:

The Bill seeks to give more power to the state, police and prison system at a time when the police are only being further exposed for their institutional racism, misogyny and brutality.

On 21 March, demonstrators like Jasmine faced repeated and excessive violence from police officers. Indeed, the horrific injuries received by Jasmine at the hands of police have been widely disseminated in the media.

62 demonstrators were injured in a succession of protests in Bristol between 21 and 26 March.

Police sergeant (PS) Williams said that the police were “outnumbered” by the crowd outside Bridewell, while PS Smart admitted that if the whole crowd had all pushed forward together they would have broken through police lines.

Very little of the police officers’ evidence related to Jasmine. And none of the officers mentioned the violence by the police, until it was brought out in cross-examination by defence barrister Russell Fraser.

Much of the police evidence relating to Jasmine was about chanting. Footage shown to the court showed Jasmine chanting “A, C, A, B – All cops are bastards”, “Who do you protect?”, and “Kill the Bill”.

PC Sean Oliver told the jury that protesters on College Green had come together to remember Sarah Everard, who was murdered in 2021 by serving police officer Wayne Couzens. Tragically, Oliver wasn’t able to remember Sarah’s name correctly, stumbling over her surname in his evidence and eventually calling her “Sarah Everett”. He also failed to remember the name of Priti Patel, who he said protesters were chanting about. He called the home secretary “Preta”.

Oliver was acting as a police evidence gatherer on the day, involved in videoing the people taking part in the protest. His evidence – as well as the police Operational Log – showed that Avon & Somerset Police were closely monitoring protesters on the day.

Much later in the day, demonstrators ended up at Bridewell Police station.

The court was shown a video of police moving in after protesters graffitied a police van and began to rock it. Police are soon seen to don riot gear.

Fraser cross-examined detective constable Leanne Weeks, the officer in charge of the case, about a piece of footage showing an incident just after the rocking of the police van by protesters. Confrontation between the police and protesters appears to have begun to subside. Then police officers are seen to assault a photographer standing in the crowd, shoving him. The crowd reacts angrily, and seconds later a police officer is seen striking a young woman in the crowd repeatedly with his baton.

The footage showed that – after the incident with the photographer – police in riot gear quickly formed a line across the street. Police officers can be seen striking people in the crowd.

Fraser played Weeks a piece of footage showing another man being violently shoved to the ground by officers and then kicked repeatedly. He is seen struggling to get up, as officers loom over him.

Seconds later, Jasmine can be seen intervening to protect a woman who is facing a line of riot police.

In fact, throughout the footage, Jasmine can be seen acting protectively towards several female-presenting protesters who are facing violence from the riot police.

Police witness PS Smart said that he “played rugby and American football” and was a “large” person who had policed a riot before. Despite this, he claimed he was “terrified” while policing the protest on 21 March. He also alleged that he had heard the crowd chanting “kill the police”.

However, when Fraser cross-examined him, Smart was forced to go back on his previous statement, and admitted that the crowd had in fact been chanting ‘Kill the Bill’ – the slogan adopted by the mass-movement against the policing bill.

Smart said that he had felt personally targeted after the crowd began shouting out his collar number (a number used to identify police officers). In response, Fraser suggested that shouting collar numbers is a common tactic used by protesters, so that legal observers can make a note of them.

Fraser played several pieces of footage from 21 March to Smart. The footage showed that Smart had pushed a female-presenting protester to the ground. Fraser asked him why he did this. Smart responded:

you’ve got to keep your line, keep your footing. that’s the whole point of the exercise. I had already warned them, and if they need to be pushed back, that’s what we need to do.

Fraser described how Jasmine intervened to protect the person that Smart had pushed over. Fraser said to Smart:

after the female is on the ground, Miss York is in front of you, arms extended out at the side of her, telling you to stop.

Smart admitted that he pushed Jasmine at this point.

Under cross-examination, Smart admitted that he struck Jasmine with a baton. Fraser pointed out that Jasmine “has her lower arms up around her forearms”, crossed across her chest. He asked Smart if Jasmine was “still a legitimate target?”. Smart replied:

not a target, but it’s the whole crowd dynamic. If the only way to get them away is the use of force then you have to do that.

It’s a situation where you need to be able to fight your corner and push back.

The footage shows that – soon after the incident where PC Smart strikes Jasmine – police on horseback were deployed.

The jury heard evidence from PS Williams about the use of police horses. She initially told the court that the horses had been forced to retreat because of missiles, but under cross-examination from Fraser, she was forced to admit that this was not the case. In fact, the horses couldn’t enter the crowd because of people sitting or lying in the road. Fraser said:

Fraser pointed out that Williams’ evidence was not consistent with her statement. He said:

Look at page six of your statement. you will see that you said “when we split to make room for the horses, the protesters sat or laid down preventing this from happening”.

The court then heard from Liam Biggs, a police dog handler. Biggs said that he was given orders to disperse the crowd from the vicinity of Bridewell.

Biggs told the court that he saw Jasmine after she had been bitten by one of his colleague’s dogs, and that she was “holding her leg”.

When cross-examined by Fraser about why the dog bit Jasmine, Biggs said:

I didn’t see what led up to the bite.

dogs always have a handler. If you’re walking past a passive person then it shouldn’t engage.

What about people walking away from a dog or facing a dog? The people need not be doing anything?

it depends if the dog perceives the person as a threat.

Fraser went on to ask:

So if a person was dragging their heels a bit they might be in jeopardy?

The court was then shown a piece of footage showing the moment Jasmine was bitten. She and others are walking away with their backs to the police. A police officer can be heard shouting:

The court was shown pictures of the injuries Jasmine sustained at the hands of the police on 21 March, which were publicised at the time by the Guardian and Al Jazeera. The court heard that Jasmine went to hospital in the days following the protest so that her injuries could be examined.

As the prosecution case drew to a close, Fraser played Weeks a recording of Jasmine calling the police just hours after the protest and reporting that she had been injured by officers. Jasmine called 101 and said:

also I think my left hand is broken

when you get hit by police who do you report to?

to the police and then we take it from there.

Jasmine goes on to ask:

do you see a flaw in that?

The operator says that she doesn’t.

Jasmine says that she was hit by three male officers, one of whom was six foot tall. She confirmed that it was all on video, including the “dog mauling”.