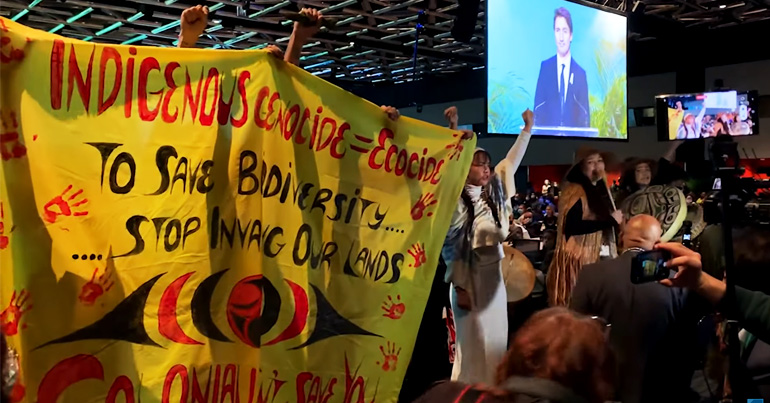 UN secretary-general Antonio Guterres has slammed multinational corporations for turning the world’s ecosystems into “playthings of profit”. He warned that failure to correct course would lead to catastrophic results. Guterres’s comments came at the opening of COP15 in Montreal, Canada, which indigenous youth disrupted to draw links between colonialism and biodiversity.

In a speech on 6 December, at the ceremonial opening of COP15, the UN’s conference on biodiversity, Guterres said:

With our bottomless appetite for unchecked and unequal economic growth, humanity has become a weapon of mass extinction.

Since taking office in 2017, Guterres – a former Portuguese prime minister – has made climate change his signature issue. His fiery denunciations revealed that the plight of the planet’s endangered plants and animals – an interconnected crisis – is equally close to his heart.

Before he took the dais, a group of around half a dozen Indigenous protesters interrupted a speech by Canadian prime minister Justin Trudeau. They waved banners that read “Indigenous genocide = Ecocide” and “To save biodiversity stop invading our land”. They also chanted for several minutes before they were escorted out to applause:

📣 BREAKING: Indigenous youth from across Turtle Island disrupt @JustinTrudeau opening speech at #COP15 to remind him that colonial Canada is the greatest threat to their livelihood, land, and biodiversity in general #NatureCOP #ProtectNature pic.twitter.com/oSvoUnGEWM

The meeting is not to be confused with another set of UN talks on the climate crisis in November, called COP27.

Scale of the problem

Nearly 200 countries have gathered for the 7-19 December meeting in an effort to hammer out a ‘Paris moment‘ for nature. The challenges are daunting, though. One million species are at risk of extinction. One-third of all land is severely degraded, and fertile soil is being lost.

At the same time, pollution and climate change are accelerating the degradation of the oceans. Chemicals, plastics, and air pollution are choking the land, water, and air. Meanwhile, planetary heating brought about by burning fossil fuels is causing climate chaos, from heatwaves and forest fires to droughts and floods.

In his speech, Guterres said:

We are treating nature like a toilet… And ultimately, we are committing suicide by proxy.

However, as one Twitter comment said, ‘humanity’ isn’t the problem, our dominant systems of social organisation – such as capitalism – are.

Ecosystem degradation, meanwhile, is estimated to impact the global economy to the tune of $3tn annually from 2030.

Biodiversity is as important as the climate

Ahead of the talks, Elizabeth Mrema, the head of the UN’s Convention on Biological Diversity (CBD), spoke to Agence France-Presse (AFP). She said that failure was not an option:

The Natural History Museum illustrated this point with a tweet thread that made it clear, amongst other factors, that biodiversity is crucial for the future of food production.

#1. We rely on biodiversity for much of our food production, including the pollination of crops.#DidYouKnow that 35% of global food production is in some way dependent on animal pollination?https://t.co/6ANIOGOyUm

Draft targets for the 10-year framework include a cornerstone pledge to protect 30% of the world’s land and seas by 2030. Eliminating harmful fishing and agriculture subsidies, tackling invasive species, and reducing pesticides are also on the cards. The new goal will rely heavily on Indigenous peoples, who steward land that is home to around 80% of Earth’s remaining biodiversity.

As the Canary previously pointed out, though, it’s hard to hold high hopes for COP15 after the failure of COP27 to reach any meaningful agreements. Meanwhile, divisions have already emerged on the key issue of financing. Wealthy countries are under pressure to funnel more money to developing nations for conservation. And the absence of world leaders – Canada’s Trudeau will be the only one in attendance – has already tempered expectations.