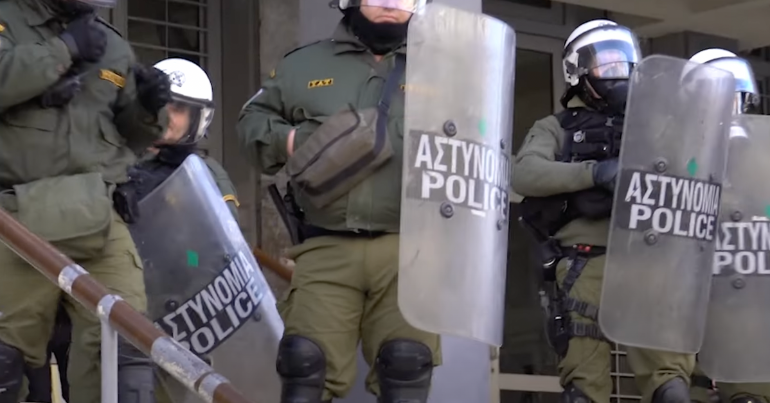 This is a tragic incident, the fourth of its kind in a year in our community.

‘Between life and death’

Early on Monday 5 December, 16-year-old Kostas Fragoulis from the Roma village of Agia Sofia was shot in the head by a police motorcyclist during a chase. The incident has prompted sporadic protests by Roma communities around the country.

On Wednesday, Roma people set roadblocks and torched tyres on a highway near Thessaloniki. Traffic was also interrupted on the Athens-Corinth motorway after rocks were thrown onto the pavement. In the western Athens district of Ano Liosia, a bus and a tyre shop were torched, the fire department said. There were no immediate reports of injuries.

Fragoulis is in critical condition in a Thessaloniki hospital. His father told reporters he is “between life and death”. According to police, Fragoulis was in a pickup truck and had tried to ram police motorcyclists who were pursuing him after he drove away from a petrol station without paying. The officer who shot him has been arrested and charged with attempted murder and the illegal use of his firearm.

The teenager’s father, Pavlos Fragoulis, who testified as part of the investigation on Wednesday, told reporters the family wanted the suspect:

to be punished and incarcerated because he shot a 16-year-old boy.

There are an estimated 170,000 to 300,000 Roma people in Greece, though the figures are not exact. The majority of Greek Roma people suffer from “exclusion and live in misery” and face “numerous prejudices and racism”, Pantzos said.

In October 2021 in western Athens, a 20-year-old Roma man was killed by police chasing down a stolen vehicle. The seven police officers involved are being prosecuted for murder and the attempted murder of a 16-year-old who was injured in the pursuit, but they are free pending trial. Earlier this year, a 44-year-old from the Roma community in Menidi, western Athens, was beaten to death by two men, including an off-duty police officer, for allegedly trying to steal an air conditioner. In January, a police officer in Volos, central Greece, shot at a group of Roma teenagers who were in a car without a driving license.

Ioannis Ktistakis, a Greek judge at the European Court of Human Rights, told parliament in March that Greece has been hit with nearly 950 rights-related convictions at the court over the last 30 years. Last year it was found guilty 13 times, one of the highest rates in the EU.

A 16-year-old Romani boy, Kostas Fragoulis, was shot in the head by the police in Thessaloniki, #Greece yesterday. Police act with impunity when they are sure that the suspect is #Roma. The ERRC will make an offer of legal support to Kostas' family. pic.twitter.com/F0g8sgfJUw