Penny Mordaunt has rebranded foodbanks and it's ghoulish 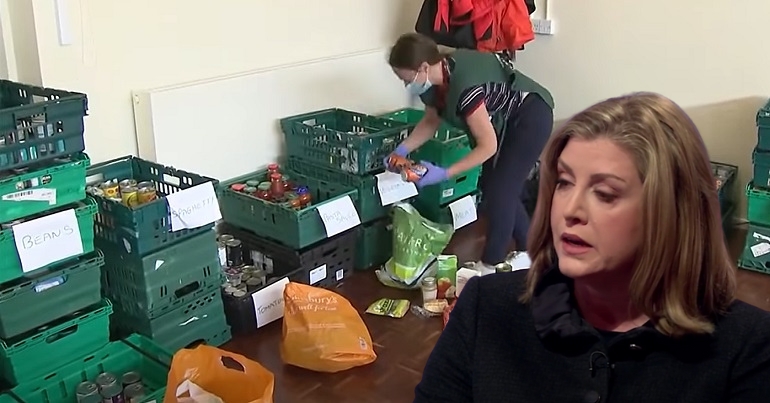 Tory MP, failed leadership candidate, and current leader of the House of Commons Penny Mordaunt has caused uproar on social media. She tweeted a video of herself promoting a new initiative in her constituency city of Portsmouth: Mordaunt is opening a handful of foodbanks. However, the MP has decided to call them something else, in a bid to make her move slightly less awful than it actually is.

As the News reported, Mordaunt is paying for three food “pantries” (not ‘foodbanks’ – ‘pantries’) to open in Portsmouth. She’s funding it from the royalties of a book she wrote. The News said that these pantries are where:

Yes, we know. That’s a foodbank – right? Well, not if you’re Mordaunt. The News continued, implying that unlike foodbanks:

Never mind the fact that people don’t need a referral from places like Citizens Advice to access many independent foodbanks, anyway. So, what is the difference between Mordaunt’s pantries and a foodbank? The News revealed that:

a typical weekly shop bought through them would cost as little as £4.

Right – so you have to pay for the food. Now it’s making sense. Essentially, Mordaunt admits people are too poor to afford food, so has set up a load of discount shops under the guise of helping her community – which are foodbanks in all but name (and the fact people have to pay). Her party’s governments have caused poverty to skyrocket. Yet Mordaunt is so proud of her pantries that she filmed a video telling us all about them.

Food pantries are a great scheme that can help families reduce their food bills by about £800 a year. They’re not foodbanks where you need to be referred in. They’re open to everyone, and for a few pounds a week you can get a decent shop.

This is not just any food bank, it’s a Make-Britain-Great-Again food bank. Sorry, pantry.
And a great vehicle for advertising a book, too! https://t.co/nGo244NcO5

Someone else pointed out the gaslighting:

“We made people poor and desperate, and now we’re making it seem as though we’re angels for saving them” https://t.co/it4ruv0nbY

And as writer Will Black implied, rebranding foodbanks is pretty ghoulish:

And no working class person who isn't a maid or butler has said pantry for 50 years https://t.co/GuP7OPh1ES

In 2010, 60,000 food bank packages were handed out in Britain. Last year, it was 2.5 million. This is the result of political choices – and the cost of living crisis will see millions more fall into food poverty.

The Tories have been in power all that time. So, Mordaunt would never admit that foodbanks were a scourge of successive governments – that would implicate her in the horror. Instead, this ghoul chooses to gaslight everyone who has to use them – by rebranding them and making our she has a charitable nature in the process. Mordaunt is supposed to be the palatable face of the Tories – yet here she is, running around trying to appeal to the ‘squeezed middle’ with this ‘food pantry’ dross. Beyond rancid.