Right-wing press piles on ambulance and NHS workers over strikes 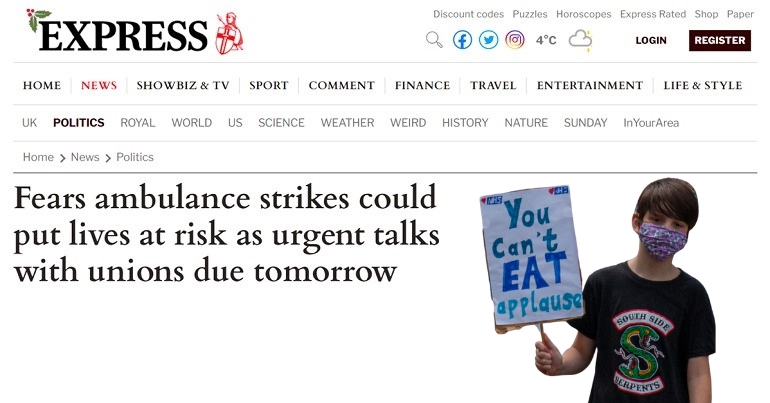 As trade unions announce that ambulance workers will strike on Wednesday 21 December, the corporate media has predictably gone on the attack. However, as one NHS frontline worker told the Canary, it is the Tory government which is actually to blame for the fact workers have no choice but to strike in the first place.

Three trade unions are taking coordinated action across most ambulance services in England and Wales on 21 December. Unison, Unite, and the GMB Union members will walk out over pay and conditions in 10 regional service areas. As BBC News reported:

The walkouts will involve paramedics as well as control room staff and support workers, with the military on standby to help out.

Unison general secretary Christina McAnea was on Sky News on Tuesday 6 December. As she said of her members:

none of them want to be out on strike.

Successive Tory governments have decimated NHS staff wages. In 2010, the coalition government froze public sector pay for two years, then imposed a 1% fixed increase. This year, the Tories have capped NHS pay rises at 4% for most staff.

For paramedics specifically, this has meant the Tories have cut their wages by around £5,600 in real terms since 2010. This hasn’t stopped the press piling on workers, though.

As the Twitter account Socialist Action shared, the right-wing corporate media has been out in force trashing striking ambulance workers:

A taste of the vile propaganda campaign to come. Deaths from ambulance delays are happening now – a marker of how the government is trashing the NHS.
But every death will be blamed on strikers from now on. pic.twitter.com/iF1dIKHCL6

For example, the rabid Express went with the headline:

People with emergencies that are not life-threatening who are made to wait more than six hours for an ambulance during strikes could be put at risk of dying, Steve Barclay [the health secretary] has suggested.

Barclay said this without irony, in spite of the fact that countless people have died this year due to ambulance waiting times of up to 17 hours – which, in turn, are due to his party’s decimation of the NHS.

Holly Turner, a nurse from campaign group NHS Workers Say No, has some strong views on the right-wing anti-worker propaganda. She told the Canary:

NHS staff have been subjected to continued attacks on their pay and safety at work for over a decade. They simply refuse to stand with their hands being their back whilst our health service is ripped apart, with patients dying in the process. What are we expected to do? Keep agreeing to get materially poorer year on year and watch the service disintegrate? What other options are open to us, when we don’t even have direct bargaining with the employers or the government? If the government wanted to try to avoid strikes they’d return to direct negotiations, which they are resolutely refusing to do.

Government and right wing attacks on us are well underway, but we will not be deterred as we cannot leave the most vulnerable to suffer whilst hardworking staff are driven into poverty.

The corporate media’s vilification of people it was encouraging us to clap for just over two years ago is highly predictable – but it also barely holds up to scrutiny.

Featured image via the Express – screengrab and Roo Pitt – Flickr, resized under licence CC BY 2.0