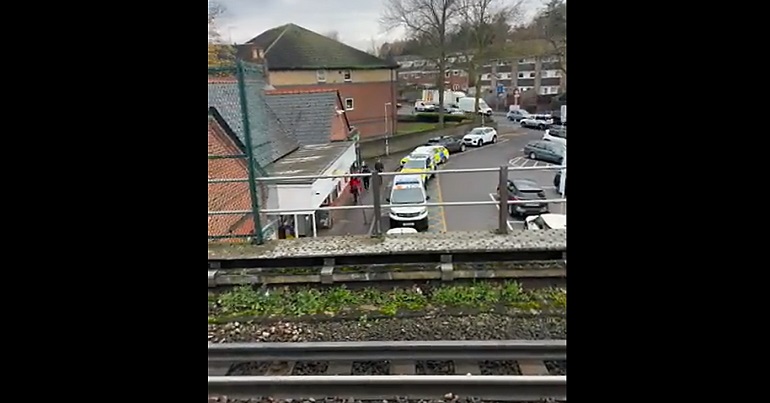 The institutionally racist Met Police are once again under fire for their treatment of two Black children. The British Transport Police (BTP) are also in the frame. However, the incident in question further shows the racist policing of Black people. The police only got involved because one of the boys forgot his free travel pass, and the cops escalated the situation rapidly.

Photographer Polly Todd shared news of an incident in Bromley, London, on social media. In short, police arrested a Black child on 5 December:

Two ladies witnessed at Shorthands Station, 2 black brothers from the Private School in the area, being treated aggressively, by staff simply because the 12 yr old, forgot his train pass, the older brother was on his way to take his mocks, Station staff called the police..1/2

Three police cars turned up, one officer from @MPSShortlands had his hand around the boy's neck, the child was arrested and now in police cell. How traumatising, how will that child recover. The younger child in tears @lorrainemking @SouthernRailUK@BameFor @Lorna_TVeditor pic.twitter.com/OZeZspAuiz

Both of the people who witnessed the police attack shared details on Twitter. Anu Obaro said in a thread:

I was one of those two women, thanks @Toddpodd. I am furious and heartbroken by what I saw on Monday. Photos/video stills shared with parental permission.

FOUR ticket inspectors putting their hands on the neck and body of a child… And he was the one who had his pass. Imagine.

His younger brother is in handcuffs at the back. Turns out he forgot his pass in his coat at his grandma’s house.

He was traumatised and shouting for his brother, who by this point has been arrested and presumably is in one of the FOUR vehicles the police brought to the scene.

Younger bro was eventually uncuffed and told ‘off you go and get your free pass then’.

He rushes out of the station to school. @StephaneATweets (new friend made in a crisis) and I run after him. I speak to him and he crumbles, crying uncontrollably. We hug and I literally pick him up from the ground.

We get him to his (private – not that it matters) school. Turns out his brother had his mock GCSEs that morning. Obvs now missed. The school were amazing – they gather round to support him, call parents etc

In photos, you can see station staff pinning the older boy to a wall by his neck:

FOUR ticket inspectors putting their hands on the neck and body of a child…. And he was the one who had his pass. Imagine.

His younger brother is in handcuffs at the back. Turns out he forgot his pass in his coat at his grandmas house. 2/n pic.twitter.com/m9ZQ0lLYIH

Yesterday (5 Dec) our officers were at Shortlands station assisting revenue staff as they checked the tickets of two boys. One of the boys failed to present a valid ticket and provided false details.

During the incident a member of revenue staff was pushed, and a 15-year-old male was arrested on suspicion of common assault and possessing an offensive weapon.

As one Twitter user said, this is “copaganda” from the BTS – given there is evidence of four white adult males restraining a child, one by putting their hand on his neck. And, most people on Twitter were not having the BTP’s response either. For example, BAME Lawyers for Justice said:

Common assault is a Mickey Mouse catch all charge and as for suspicion of possessing an offensive weapon? Sounds like a stereotypical accusation. The boy either had one or he didn’t. Has he been charged or not?

Obaro summed the situation up:

The tendency to escalate to excessive force and the ease with which our black sons are criminalised is well established but even knowing the stats, seeing it at 9am on a Monday at your local station is mind blowing. The disproportionate use of force was staggering.

There’s a presumption of guilt from authorities re black boys and men… which results in disproportionate contact with the criminal justice system. Only ends badly for us… of course.

It would seem obvious that you don’t de-escalate a situation by using more force. If you were surrounded by 4 men using their hands and feet to incapacitate you (WHEN YOU HAVE A TICKET) wouldn’t you be fearful?

It’s easy to walk by & assume the boys were guilty ‘of something’, like many did. Why is that? Because you’ve been conditioned to believe that black kids are always ‘up to no good’? Oh & if they’re tall they’re men not boys? Sigh, adultification of black children.

As the Canary previously wrote, adultification is:

where they [Black children] are perceived as older than their years and less likely to be vulnerable by teachers and other adults, preventing them from receiving the care and protection they should have as children.

My heart hurts like they were my sons, because they easily could be.

How can it be so easy to brutalise us? Seeing how shattered, afraid and humiliated they were in that moment and after – and the authorities don’t care about the damage.

She concluded that she was:

grateful that @StephaneATweets (who I just met that day), got video and we have photos to add balance to the narrative. As traumatic as it all was *especially* for them both, we need them to know that there’s someone on their side.

We’ll advocate for them when adults in authority chose violence instead of the patience and understanding which seems easier to extend to everyone else but black people.

And Obaro told the Met, BTP, and South Eastern Railways – whose station staff attacked the Black child – that:

you have to do better. The excessive force used on these two children was not only unwarranted but an absolute abuse of power. What measures will you put in place to ensure this doesn’t happen again?

The incident comes just months after the police killing of Chris Kaba. As the Canary‘s Sophia Purdy-Moore previously wrote:

On 14 September, new Met Police commissioner Mark Rowley inherited a force that is in special measures. This is due to a series of scandals including the rape and murder of Sarah Everard, gross misconduct following the murder of sisters Bibaa Henry and Nicole Smallman, and the strip searches of 15-year-old Child Q and hundreds of other children.

We saw excessive and disproportionate policing throughout the pandemic, and now face further repression through the Police, Crime, Sentencing and Courts Act. We can’t sit back and let this continue. Now is the time to withdraw consent from violent and discriminatory policing, and to organise for a safe and just future.

The incident in Bromley is another in a long line of institutionally racist policing and anti-Blackness – reflecting British society more broadly. Of course, that’s exactly how the colonial power structures that govern the corporate capitalist system we live under want it to be.