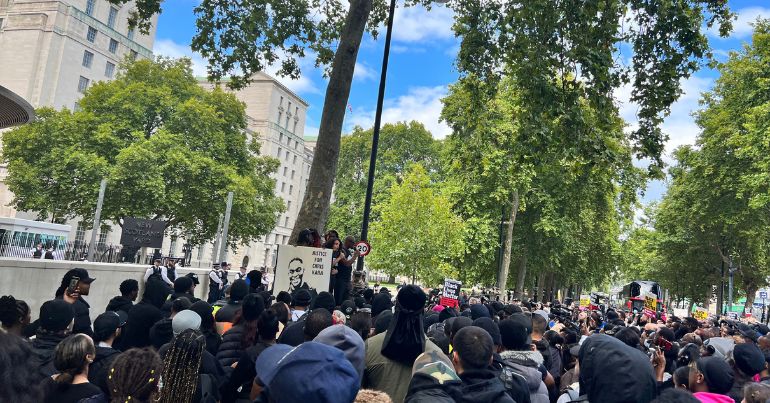 On Monday 5 September, a Metropolitan Police officer shot and killed Chris Kaba in Streatham, south London. Following pressure from his bereaved family, the Independent Office for Police Conduct (IOPC) has launched a homicide investigation into Chris’ death. Thousands of protesters marched through Westminster in solidarity with Chris’ family on Saturday 10 September. While bystanders left flowers and marmalade sandwiches at the gilded gates of Buckingham Palace, the devastating laments of Chris’ mother rang through the streets. This is what a ‘period of mourning’ looks like for families bereaved by state violence.

Overshadowed by the queen

The queen’s death has overshadowed this moment of national importance. The queen died peacefully at one of her homes, surrounded by her family at the age of 96. Meanwhile, 24-year-old Chris Kaba died violently, alone, and afraid while surrounded by armed police.

Having spent her life as a representative of colonial violence and exploitation, the head of state used her final months to ensure that her predatory son Prince Andrew evades accountability and to grant royal assent to a series of draconian laws. The state is now enforcing an all-encompassing ‘mourning period‘ for the queen. This includes the cancellation of subjects’ hospital appointments and funerals, and wall-to-wall coverage relating to the upcoming, multi-million pound publicly funded funeral. This is taking precedence over the ongoing national and global crises which impact everyday people’s lives.

Meanwhile, those who knew Chris can’t properly mourn their loss of a beloved son, fiancé, cousin, friend, neighbour, and soon to be father. They are too busy demanding answers. His family didn’t even know that police had killed him until 11 hours after the incident.

No ‘mourning period’ for this bereaved family

Instead of processing their trauma, Chris’ loved ones had to jump into action to demand an investigation into his death. While overcome with grief, they launched a grassroots campaign and rallied the community. They quickly organised a huge protest (which Sky News incorrectly reported to be a procession in the queen’s memory).

This bereaved family had to exert pressure on the Met to suspend Chris’ killer. They had to demand a timeframe for the Independent Office for Police Conduct (IOPC) investigation, and exert pressure to access the footage of Chris’ violent death.

This is often the case for families bereaved due to state violence. Reflecting on the state’s “culture of delay, denial and defensiveness”, INQUEST director Deborah Coles told Justice for Chris Kaba protesters:

yet again, it’s families who have to force the organisations responsible to tell the truth. […] Without the families, legal support, the political and community support that has been shown, this homicide investigation would not have been started.

Now, Chris’ family and friends must raise funds for their campaign seeking the truth about how armed police killed their loved one before he even had the chance to identify himself.

They must engage in mainstream media appearances to urge this distracted nation to give a damn. But if they fully express their righteous rage, the British public may deem them unworthy of sympathy and compassion. Meanwhile, they’ll witness the abhorrent things that individuals and institutions will say to justify the police’s killing of a young Black man.

If anyone’s wondering why we are still taking to the streets to declare that ‘Black Lives Matter’ – this is why.

A community in mourning

We marched and we chanted ‘touch one, touch all’ and this sums up why the protest was so important. The killing of Chris Kaba has deeply hurt us all. There exists no language that is able to fully articulate the depth of pain we feel.

This collective grief is a response to British policing which has systematically criminalised, imprisoned, violated, and killed Black children, young people, adults, and elders with impunity for decades.

Chris joins a shamefully long, long line of Black men who’ve died after the use of lethal force by police officers.

Chris is the latest of 1,833 people to have died in police custody or following police contact in England and Wales since 1990. Due to systemic and institutional racism, Black people are overwhelmingly overrepresented in these figures. Particularly in cases where police have used lethal force. In spite of these figures, we have only seen one successful murder or manslaughter prosecution of a police officer in over 30 years. This was the 2021 manslaughter conviction of PC Benjamin Monk who brutally killed former footballer Dalian Atkinson in 2016.

In particular, the police killing of Chris is strikingly similar to the death of Mark Duggan in Tottenham, which sparked the 2011 uprisings. Met officers shot and killed the unarmed 29-year-old after using a ‘hard stop’ to intercept the taxi Duggan was travelling in. The Met ignored the Independent Police Complaints Commission (IPCC)’s recommendation to review its use of the dangerous tactic.

As Mwale told the crowd on 10 September:

If they listened after Mark, Chris would be alive!

Following an inquest marred by inconsistencies and misinformation, the jury concluded that the police killing of Duggan was ‘lawful‘. The high court rejected his mother’s attempt to challenge this verdict in 2014, as did the court of appeal in 2017. This is the level of obstruction that Chris’ family is up against.

Abolition in our lifetime

The 1981 Scarman Report; the 1999 MacPherson Report; the 2013 Adebowale Report; the 2014 Young Review; the 2017 Angiolini Report; and the 2017 Lammy Review have all set out actionable recommendations on how the police and the criminal justice system can cause less harm and devastation. But they have failed to meaningfully implement the majority of the recommendations. The police themselves have demonstrated that it is impossible to reform an inherently oppressive and destructive institution.

Reflecting on this, Stand Up To Racism co-convenor Weyman Bennett told protesters:

It’s not just a few rotten apples. There’s something fundamentally, institutionally wrong with the Metropolitan Police.

It will not be reformed. It has to be abolished!

On 14 September, new Met Police commissioner Mark Rowley inherited a force that is in special measures. This is due to a series of scandals including the rape and murder of Sarah Everard, gross misconduct following the murder of sisters Bibaa Henry and Nicole Smallman, and the strip searches of 15-year-old Child Q and hundreds of other children.

We saw excessive and disproportionate policing throughout the pandemic, and now face further repression through the Police, Crime, Sentencing and Courts Act. We can’t sit back and let this continue. Now is the time to withdraw consent from violent and discriminatory policing, and to organise for a safe and just future.

Chris’ family’s fight for truth and accountability has only just begun. We must stand in solidarity with them every step of the way.

Those looking to support the Justice for Chris Kaba campaign should take part in the national day of action on Saturday 17 September. Supporters can also donate to the campaign fundraiser. Follow @justiceforchriskaba on Instagram to keep up-to-date with campaign actions and developments