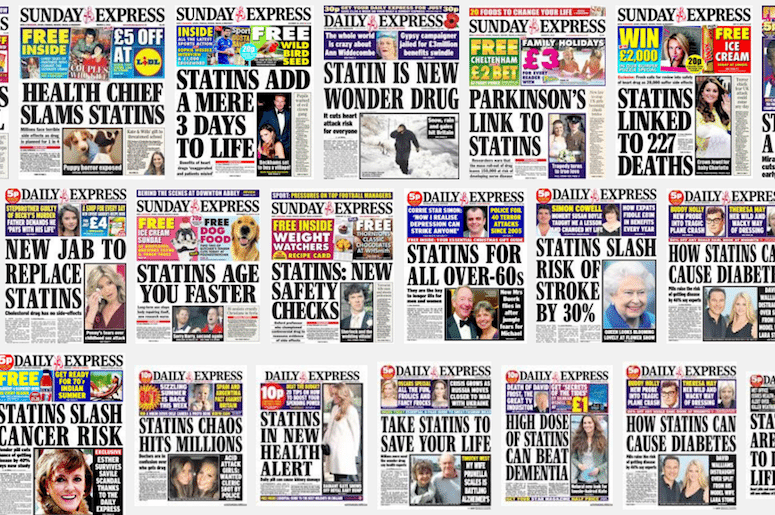 Not only are the conflicting news stories about our health confusing, they might actually be killing us, according to scientists.

A new study published in the European Heart Journal shines a light on the dangerous effects of overblown and biased news stories. It reveals that every negative national news story about statins is connected to a 9% drop in the number of people taking the medication.

This drop explained 2% of heart attacks and 1% of deaths from cardiovascular disease associated with stopping the medication.

If negative statin-related news stories did not exist at all, then early statin discontinuation would decrease by 1.3% in the whole of the population.

Results revealed that the release of a negative story was linked to people stopping their medication. Prof. Nordestgaard explained the results:

Although we cannot say for sure that statin-related negative news stories cause the early discontinuation of statins, our findings suggest that this is likely. And although this type of association research cannot prove causality, our data suggest that early discontinuation of statins leads to unnecessary heart attacks and deaths from cardiovascular disease.

But this worrying picture isn’t a new one. Earlier this year, an Australian study linked a negative TV documentary on statins to 60,000 people stopping their medication.

News stories can be confusing: one minute they’re telling us to steer clear of something at all costs, for fear of it causing cancer or heart disease, the next minute it should be top of our shopping lists because of its slimming, life-lengthening, cancer-beating properties.

The news isn’t necessarily wrong; the trouble is, science isn’t linear. It’s not about finding a single, simple truth. It’s a complex web of incremental discoveries, conflicting findings and perplexing anomalies; science is about building a solid knowledge base, and each small block adds a new dimension to those that came before it.

It could be true that red wine increases your risk of cancer or helps you live longer, or that statins reduce your risk of heart disease or cause Parkinson’s disease. But research looks at all of these effects together, building an overall picture of the complex effects things have on our bodies under different circumstances.

That’s not easy to get across in a six-word headline.

Add to that the tendency to go for the most shocking and worrying side-effects (which are generally the rarest) and you end up with a bias that’s having a big impact on people’s behaviour. Prof. Nordestgaard said:

Positive news stories tend to be evidence-based, explaining how statins can prevent heart disease and early death, while this is often not the case for negative news stories, which tend to focus on relatively rare and moderate side effects.

Perhaps unsurprisingly, UK media outlets have been quiet on the matter. It’s unlikely they have any plans to change their approach – after all, we’re clearly gripped by these stories.

Instead of trying to align news and science, maybe we need to engage with research more closely. This week, Imran Khan, Chief Executive of the British Science Association, argued that the public should be more involved in science and take part in debates and discussions around research.

Not only would this help us see through the headlines to the body of scientific knowledge, it would also result in more relevant, useful research outcomes. Khan concluded in his article in The Guardian:

Science is arguably humanity’s greatest and best invention. To make the most of it, we must ensure that it belongs to all of us.