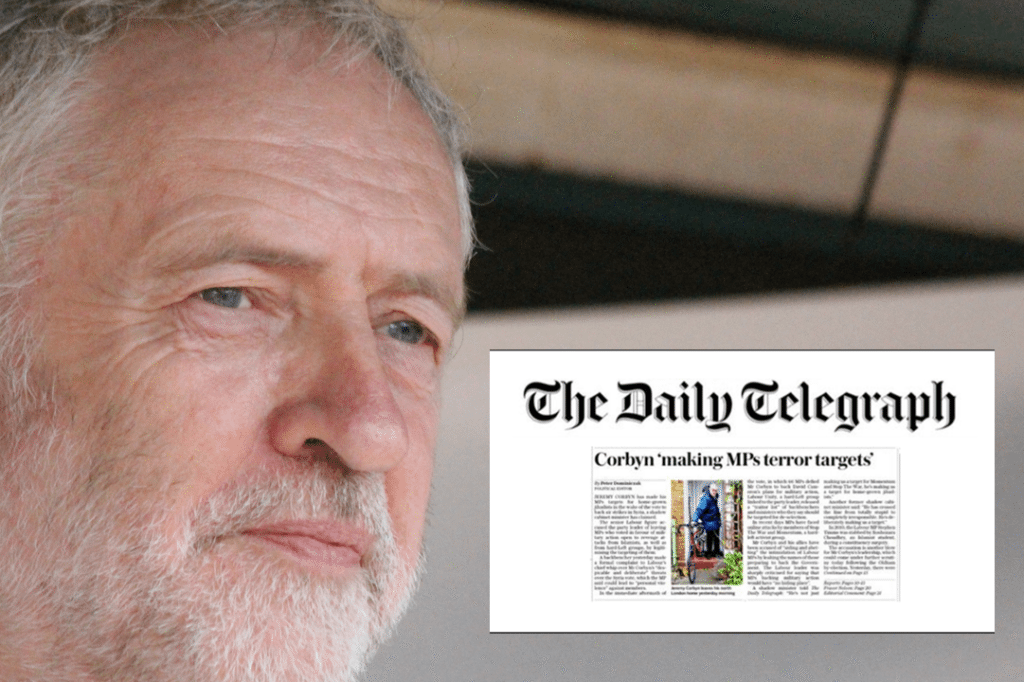 As the recriminations continue to fly following Wednesday’s House of Commons vote in favour of airstrikes in Syria, elements of the right wing media continued to be less interested in the real impacts of UK military action and more concerned with haranguing Corbyn.

In a story released on Thursday evening ready for the Friday print edition, the Daily Telegraph cobbles together a ramshackle argument that Corbyn is somehow to blame for a grave increase in threat to the personal safety of Labour MPs who defied their party to vote with the government. It quotes two senior Labour figures trotting out the identical line: “he’s making us a target”.

One, a Shadow Cabinet member, said:

While the other, a former frontbencher, said:

He has crossed the line from totally stupid to completely irresponsible. He’s deliberately making us a target.

These are extremely serious allegations, yet the Telegraph’s supporting case is flimsy at best. Firstly, it requires a significant misunderstanding of Corbyn’s comment that there would be “no hiding place” for MPs. The Telegraph brazenly takes this to mean no hiding place for MPs who support bombing, implying that Corbyn knows such members will come under threat. In fact the paper’s own reporting makes it entirely clear that Corbyn is saying that all Labour MPs will have to make up their own minds in the free vote and there will be “no hiding place” such as behind an imposed party line, for either pro or anti. In other words, the context of the hiding place comment is obviously the House of Commons chamber.

The second rotten plank of the Telegraph’s argument is the notion that pro-airstrikes MPs have been betrayed by having their identities revealed. Well, of course if it was a secret ballot then to divulge details would be shameful and wrong. But it wasn’t, which is just as well because, at the bottom of the article, the Telegraph has a graphic showing how the Shadow Cabinet voted. So it’s a pretty spurious stunt to describe this tweet from what the Telegraph mistakenly calls ‘Labour Unity’ as a “traitor list”:

Here is the list of the 66 Labour MPs who just voted to bomb Syria. pic.twitter.com/qI1qXxm8Cq

OK, so “warmonger” is moderately emotive language, but hardly unprecedented in politics and in any case, to link Corbyn to Left Unity is clutching at straws. It would be easier to link David Cameron to militant fox hunting supporters, not always known for their placid behaviour.

Essentially, the Telegraph has sought to conflate the rumblings of a pair of disaffected Labour malcontents with the reports from some MPs of unduly robust lobbying (which Corbyn has moved to quell). What they’ve succeeded in doing is casting a significant slur on a politician who has acted with consistency and dignity throughout the whole debate. Corbyn has already been blamed for taking Britain to war, despite continually arguing against it. Now it seems he will get the blame for any reprisal attacks, despite his persistent efforts to avert precisely such scenarios.

Following the Daily Mail’s appalling cartoon and The Sun’s blatantly untrue headline, it would be nice to think that the UK media had bottomed out and was ready for an upturn. Incoherent muck-raking such as this latest effort from the Telegraph suggests we may be stuck on the down slope for a while longer yet.