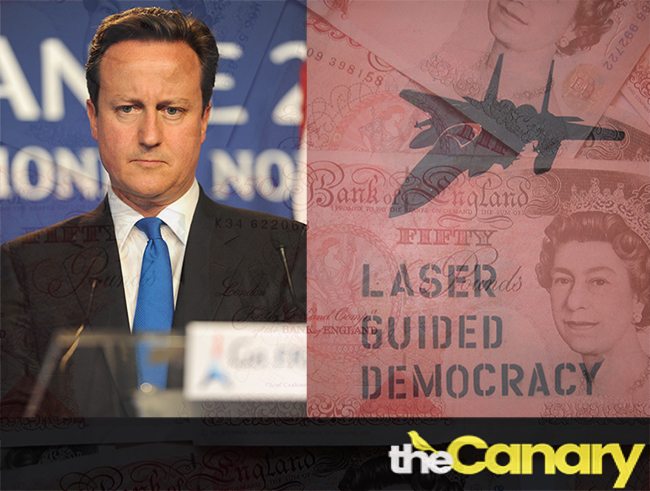 War is good for business, or so it seems, as defence contractor stock market shares continue to rise. David Cameron’s desire to gain approval for British forces to join the bombing of Syria must be music to shareholders’ ears, whatever the human cost.

Max Keiser and Stacy Herbert from the Keiser Report explained in detail this week that as the war escalates defence contractors will benefit from a rise in their share value.

To date, the fight against Daesh has been a farce. Not until Russia entered the fray was their supply of oil hit in bombing raids, reducing their financial lifeline. The excuse offered up by former head of the Central Intelligence Agency, Michael Morrell, was that the United States government had environmental concerns about taking such action at the time.

As the media and government propaganda reaches a feverish crescendo, leading up to the latest vote in the House of Commons to bomb Syria, the markets have been crowing over the continual growth of defence contractors, such as Northrop Grumman Corporation, a US defence contractor whose shares are up 27.8% this year, and Lockheed Martin, up 17%.

The link between war and business is not a new one, but it often goes unmentioned during a debate on whether to proceed with a bombing campaign or troop deployment in some far off land that most people could not find on a map. Not only do our weapons arm people that we later decide we want (or need) to eliminate, but in the process, companies are making huge profits from the suffering of ordinary people, and yet it is applauded.

The defence sector typically rallies well during unrest and conflict. It has long been known that fighter jets in hangars and guns in holsters do not make money for their makers. Permanent war economy demands that we have a fresh round of blood-letting every so often to keep business booming and the money flowing. Just on Monday this week, the markets reported shares for Raytheon (RTN) rising 4%. Lockheed Martin were up 3.5% on the same day and drone maker, AeroVironment, had soared 6%. These companies are effectively cashing in on atrocities like the recent Paris shootings, and the daily violence being played out in countries we were supposed to have ‘liberated’, such as Iraq, Libya and now Syria.

Less than two years ago, David Cameron was trying to convince the House of Commons and the public of our moral obligation to bomb Syrian forces controlled by Bashar al-Assad. How different might the situation be in Syria today, had our MPs made the mistake of believing the rhetoric that night? Now Cameron is at it again but this time aided by a vociferous propaganda and media campaign that even John Pilger recently described as ‘greater than at any time he can remember’, even more so than the lies that led to and supported the invasion of Iraq in 2003.

The most recent example of failed Western interventionism must be Libya. A country where bombing was promoted as the solution to a civil uprising and millions of pounds were spent in the course of the operation, and the outcome has been a country left in turmoil, with Daesh beginning to take control. It should be of no surprise that in the years leading up to Gaddafi’s removal, Western governments had funded Libya to the tune of millions of pounds. It is a constant cycle of befriendment and armament of a dictatorship, ultimately leading round to dispute and war. The cycle must be broken if anything is to change.

The only people who benefit from war are the corporate interests making and selling the arms that are used in battle. These monied interests are the real ‘terrorist sympathisers‘, not the peace-loving, innocent citizens that are victims in the blowback of our failed foreign policy of regime change and interventionism. David Cameron claims that the terrorists hate us because of who we are and not because of what we do to them. But how can he truly believe that when Western killing machines are relentlessly sent to drop bombs on the people he purports to help, and when they have pleaded with us not to drop them as they have nowhere to hide from them?

The US, France, Russia and Jordan have all thrown bombs at the situation in Syria and have not made it any better, nor have they stopped Daesh. What makes David Cameron think our bombs will do any better other than to line the pockets of arms companies supplying the demand?

The propaganda machine has made this war about a religion and besmirched a prophet. The truth is these wars are driven by profit and the only ‘religion’ involved is money.