End the culture of violence against women (VIDEOS) - Canary 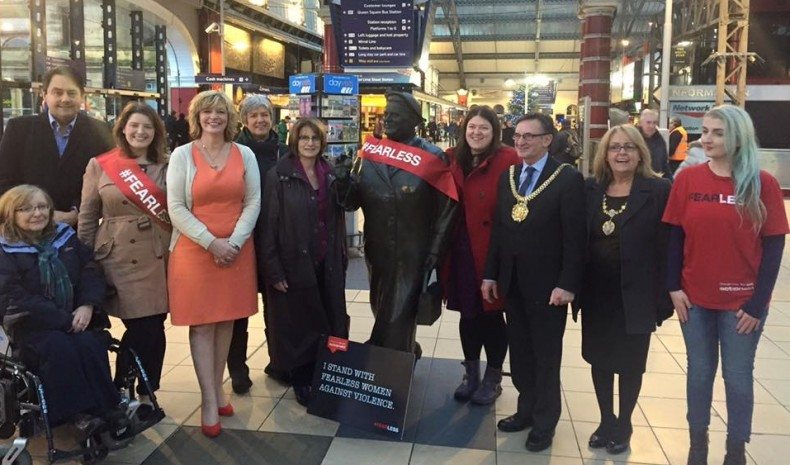 On Saturday 28 November 2015, a small but meaningful ceremony took place at Lime Street Railway Station in Liverpool, to honour the life of one of the city’s finest. Bessie Braddock MP (1899-1970) was a social activist of incredible fortitude and courage, who, throughout her long career, became something of a living legend on Merseyside. She campaigned for decades with great perseverance and, yes, often much loudness (all-too-often, the only way that works), for advancements in maternity rights, child welfare, and combating the causes of youth crime. She was also physically fearless, demonstrated by her decision to work as an ambulance driver in World War II at the height of the Liverpool Blitz.

As part of the United Nations’ 16 Days of Activism campaign to end violence against women and girls, local activist and writer, Kate Menear of Action Aid (and the Huffington Post) draped a red sash, emblazoned with the word ‘Fearless’, around the shoulders of a statue of ‘Battling Bessie’ stood in the busy concourse of Lime Street Station.

Kate also held up a sign declaring, ‘I stand with fearless women against violence’, and was joined by some local dignitaries – including Lord Mayor of Liverpool Cllr Tony Concepcion – in delivering speeches to the crowd that had gathered.

The speeches discussed the legacy of Braddock, and the ongoing struggle to end the culture of violence against women – a culture that remains stubbornly pervasive in the 21st century. According to Councillor Emily Spurrell, the mayoral lead for community safety in Liverpool,

More than a third of women and girls experience some form of physical and/or sexual violence in their lifetime, and most of the time it is from someone they know.

Department of Health figures show at least 750,000 children a year witness [domestic abuse], with many being abused by the same perpetrator.

In a week when an anti-abortionist murdered three people at a clinic in Colorado – showing how hollow the term ‘Pro-Life’ is when it’s used to impose a man’s wishes upon the bodies of women – and when the world learned the heart-breaking fate of Samra Kesinovic, beaten to death for trying to escape from Daesh (ISIS), nobody should be under any illusion that the issue of violent male oppression of women is gone, or even that it is declining particularly quickly (if at all).

But then, we do not need to look to Syria to see the frustrations, fears and vulnerabilities a woman faces, which, even in modern Britain, remain considerable. She will experience cat-calling as she walks down a street, be stared at in bars, then told when she objects that she “shouldn’t have dressed that way” – why, on that subject, does society allow men to believe that women dress for anyone other than themselves? A woman will be judged for not “making an effort” if she wears little make-up, but then judged as “attention-seeking” if she wears too much. Any woman is forced to accept that, when out in a bar or pub, it is somehow “acceptable” when she is not sitting with a glazed expression on her face, for a man to approach her and instruct her to smile. Worst of all, a woman must know that there are some areas where she cannot walk alone at night, ostensibly on “public property”, for were she to be attacked, society would hold her partially to blame.

Britain is still a country that objectifies and pidgin-holes women, have no doubt. (Just ask former Labour leadership candidate Liz Kendall, whom the Mail On Sunday thought it was entirely appropriate to ask about her weight.)

For these reasons, in one of the most thought-provoking parts of her speech, Kate admitted that the name ‘Fearless’, given to the campaign, is a very difficult one for women to live up to in this insidious culture.

In a fearful world, please forgive me for being afraid.

Sadly but pertinently, these sentiments were given visible supporting evidence during the event, when a random passer-by walked up behind Kate and leered at her. One of the dignitaries, Ann O’Byrne, chased him off quickly but tactfully before he could derail things. While this brief incident was saddening, the fact that the man was sent packing so quickly was symbolic; ultimately, casual misogynists are cowards and can be thwarted by confrontation.

Kate Menear’s story of becoming an activist tells of a meteoric rise, which should be an object lesson to the cynics who say activism is ‘futile’. Speaking to The Canary after the ceremony, she explains that she only became involved in feminist activism early in 2015, through the campaign movement ‘Reclaim The Night‘. She attended a demonstration in Manchester, which Kate says she found ‘incredibly cathartic and powerful’. She joined up with RTN Liverpool through local Councillor Rachael O’Byrne (one of the speakers at Saturday’s event), and served as the group’s communications officer for a march in Liverpool in April this year. Kate read poetry at that event, and her place as an activist, in her own words, ‘all spiralled from there’. ActionAid UK soon found her through her RTN work, and had her speak at further events in both Manchester and Liverpool. Being part of the movement was

about unity, about support, about a network of people working together to be bigger and braver than they are as individuals.

Of her decision to create the tribute to Bessie Braddock, Kate says,

I roped myself into organising the Liverpool fearless statue stunt. It really shows how quickly you can get involved and exact big or small-but-tangible changes in the real world if you want to.

The #FearlessWomen tributes appealed to her, in part because she loves “the strength that the word ‘Fearless’ inspires, even though it’s impossible and impractical to be without fear.” That implication of strength was what drew Kate to making the tribute to Braddock, whom Kate describes as “a bit of a badass.” Undeniable.

On a less cheery note, Kate had few other options available to whom to give the sash, due to the sad shortage of monuments to the great women of Liverpool’s (indeed Britain’s) history.

Statues of women in our city are hard to come by so pickings were slim. There’s a lovely statue outside of the women’s hospital that I thought could be nice but accessibility-wise could be problematic, and I didn’t want our ceremony to be in the way of any women going into labour!

But then of course, that shortage of female monuments is a large symptom of the culture that this event attempts to address. That is to say, the culture of masculinity, which, along with the violence and the stubborn inequality, also insists women must do everything twice as well as men to get a quarter of the credit. Some of the greatest scientists, politicians, doctors and writers of world history are, or were, women, but how many people are aware of, say, Cecilia Payne-Gaposchkin? Or Sister Elizabeth Kenny? Among countless others.

Still, the statue of Braddock, with a handbag in her left hand, an egg in the right – to signify her introduction of the ‘Lion standard mark‘ for quality assurance on British eggs – proved a god-send.

When we found Braddock, [the statue] was perfect; she was so accessible to everyone, city central, and also we caught the attention of a lot of passers-by who didn’t know about the event.

Indeed, the crowd was initially small, but a number of people stopped to listen, and to applaud, as the speeches were delivered. This was gratifying, as early excitement among the attendees had been tempered by concerns that passers-by might start heckling instead, as often happens at events promoting women’s rights. Thankfully the aforementioned man who did try to interfere was the only potential troublemaker, and he was removed instantly.

A shared sadness could be sensed at different points in the speeches when unhappy facts were revealed, but there was an upbeat ‘vibe’ among the crowd at the end. A hopeful sign, perhaps, when members of the public stop to listen, instead of stopping to sneer, that more people are for women’s rights than against them. A hopeful sign that one day, just maybe, there will be a world without violence against women.

If you or someone you know is experiencing abuse, the following support services are available:

If you are being abused or suffering indirectly as the result of abuse (a child or family member), call the Women’s Aid 24-hour helpline on 0808 2000 247.

The Respect Phoneline provides confidential advice for people who are abusive and/or violent towards their partners – call 0808 802 4040 (free from landlines and most mobile phones).

Featured images by the authors.