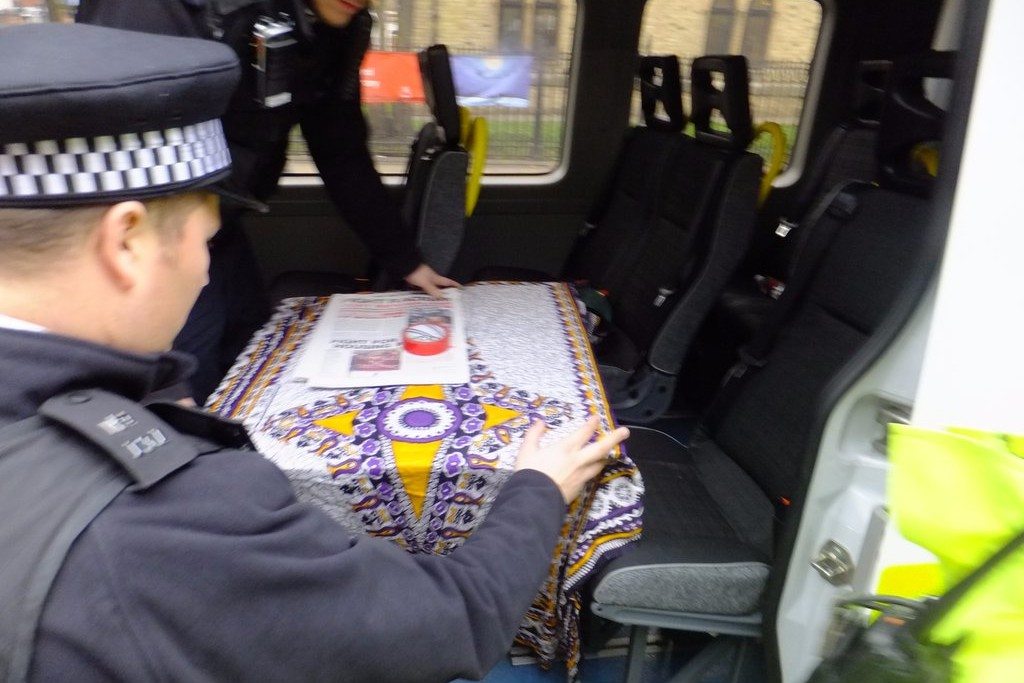 In farcical scenes, housing campaigners had the table they were using for a street stall seized by police. In response they demanded:

The Focus E15 table is innocent – release it now!

Focus E15 began as a campaign by a small number of young mums facing eviction from their hostel, but has now grown into a wider pressure group campaigning for more secure house-ownership. For the last two years, they have been running a weekly street stall as part of their work raising awareness of the social cleansing being inflicted on swathes of London housing estates.

The Carpenter’s Estate in the borough of Newham presently has 400 empty properties. Focus E15 have called for Carpenter’s to be repopulated, particularly given that 5,000 people in Newham are housed in temporary accommodation. The pressure group fears that Newham Council, run by Labour, is trying to empty the estate so that the land can be sold to developers.

At the start of December, the council moved to close down the Carpenter’s Estate Tenants’ Management Organisation (CTMO) on the grounds of insolvency, despite the council being both the only funder and the only creditor for the CTMO. Staff have been relocated within Newham Council without the agreement of the CTMO board, meaning an uncertain future for the community centre they ran, which offered IT facilities, a meeting room and a soup kitchen.

Understandably, this has led to relations between the council and the campaign becoming even more strained and could explain the council’s decision to call in the police against Focus E15. It is also quite possible that there was a desire to ‘sanitise’ the streets of Stratford ahead of a visit to the area by Labour’s candidate for London Mayor, Sadiq Khan.

Whatever the reason, a council enforcement official, together with several police, approached the Focus E15 stall about 40 minutes before they were due to pack up and demanded that they leave. The campaigners pointed out that no-one had complained about their stall, the street was very wide and spacious, and they had been there every week for two years with no hint of a problem. However, the council official was insistent and the police used their physical heft to remove the table by force. As one Focus E15 supporter noted:

It was so ridiculous and absurd seeing the police and council seizing our campaign table and bundling it into a police van as if it were a person being taken to a police station. At the same time we recognise the seriousness of being targeted by the council in this way, but we will not be intimidated. And we want our table back, Newham!

Already, people have been suggesting ways of supporting Focus E15 in the furniture department:

Does anyone know where one could find a nice, heavy, solid oak table for @FocusE15 ? https://t.co/UL1WYeFCbI

There have even been hints circulating that Focus E15 may have lots and lots of tables to choose from next Saturday. Feel free to help if you can.