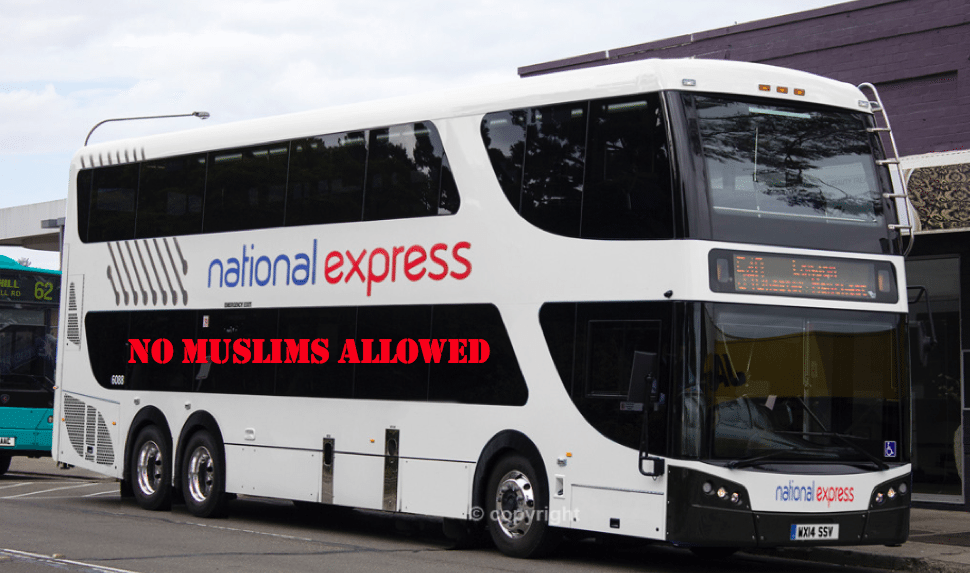 A Muslim man was booted from a National Express coach in Bristol, because fellow passengers complained they felt “uncomfortable” sharing the journey with him onboard.

Customers had taken their seats on the Bristol-London coach, when a Muslim passenger was asked to leave. He was given the reason that he had ‘bulky luggage’, but fellow passengers say they were clear on the sequence of events – and this man was asked to leave because a group of passengers didn’t want a Muslim man on their coach.

Several passengers from the bus spoke out about the upsetting scenes to the Bristol Post. 21-year-old University of Bristol student Rebekah Makinde said:

“I couldn’t really believe what I was seeing”

“As soon as he got on the coach, the women at the front were just silent and staring at him. They were making their feelings very obvious.”

“As soon as the man sat down, one of the women went to speak to the driver. Another member of staff then came on and asked the man to get off. He didn’t protest or anything, he just got off.

“What disgusted me the most was that someone actually thanked the woman after he left.”

And as for that ‘bulky luggage’ excuse, Ms Makinde says this is pure nonsense.

“I heard the entire exchange between the woman and the driver and I know luggage was not the reason he was asked to leave.” she said, adding:

“I understand that drivers want their passengers to feel comfortable. But not if it stems from someone’s unfounded and Islamophobic beliefs and at the expense of another paying passenger. I am truly appalled.”

She was not alone in her outrage. Fellow passenger, Nick McDonald was on the coach en route to a work conference and could scarcely believe what he was seeing.

“I heard the group of women at the front of the coach say he looked ‘shifty’. She got off the coach to make a complaint and the next thing a man wearing a National Express vest got on and asked him to get off. If the man was carrying too many bags, why was he allowed to board the coach in the first place? It wasn’t until the woman said she felt uncomfortable that he was asked to leave.” he told the Post.

This isn’t the first time, even this year, that National Express have been caught applying potentially racist policies against customers. Earlier this year, the Facebook post of 20-year-old Muslim student Yusra Ahmed went viral after she complained about treatment that she and two friends received at the hands of a National Express driver. As she explained at the time:

“She analysed each of our tickets and coach cards very closely, which is something we noticed she didn’t do to any of the other passengers,”

“She then shouted quite loudly that we were not allowed to eat on the coach and that we had better not be taking ‘curry’ on to her coach,”

When the girls offered to give their meal away to the homeless people at the station and board the coach, they were apparently subjected to a rant about their ‘smelly curry food’.

When they complained that they felt this constituted racial stereotyping, they were barred from the bus, and forced to wait two further hours to catch the next one.

In both cases, National Express have appeared to dismiss the concerns of the alleged victims of this treatment, and the testimony of their fellow passengers. The bland, generic statements of non-apology leave us less than convinced that the travel firm is taking these allegations of racism seriously.

People have taken to social media to slam the incident and call for the dismissal of the driver involved.

Racists are verbally abusing Muslims on buses daily. Now, if they can't be bothered, they just have us removed instead! #nationalexpress

The cases come amid a wider context of anti-Muslim sentiment perpetuated by an irresponsible mainstream media, and members of the political class who would benefit personally from the fallout. These groups and individuals should not be permitted free reign to incite prejudice, persecution, and violence, against the Muslim population of Britain. We at The Canary will be following this story as it unfolds, and holding National Express to account if it fails to uphold its duty of care to passengers to travel in safety, free from the fear of such despicable acts of discrimination.

UPDATE 8/12/2015: An important update to the story about a Muslim man being evicted from a National Express coach yesterday.
National Express argue the passenger was abusive to staff. 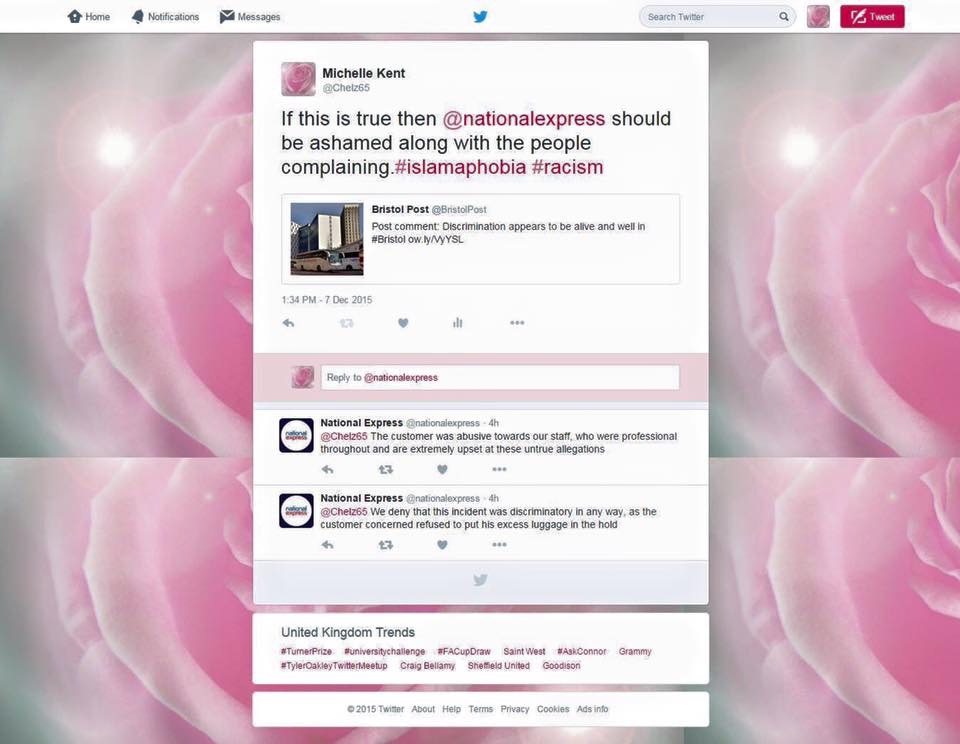 We are continuing to investigate the story, but want to keep you all in the loop in case you don’t click back to the original story.

As with all our updates/corrections, we’ll keep this pinned to the top of our Facebook page for 48 hours to ensure maximum reach to our readers.