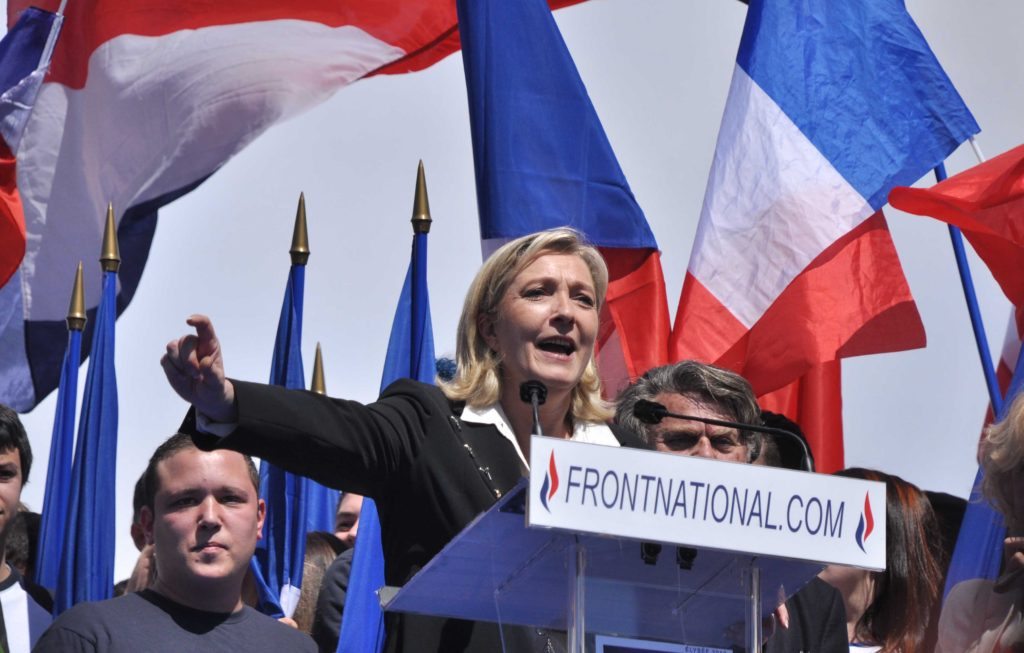 The ballots for France’s regional elections have not even been counted, and already the Telegraph are celebrating a ‘historic result’ for Marine le Pen’s far-right party, the National Front. Winning 28% of the first round puts them in 1st place in 6 out of 13 regions, but with two more rounds to go – the next on the 13th of December – this is still too early to call.

Since taking over the party leadership from her father Jean-Marie Le Pen in 2011, Marine le Pen has tried to soften the party’s image and make it less susceptible to accusations of anti-Semitism. But the policies speak for themselves. They include a range of surveillance measures and increased police powers, a referendum on the reinstatement of the death penalty, and proposals that the French be given priority over foreigners when it comes to housing and jobs.

The hardline party’s policies have, since its formation in 1972, constituted a hodge podge of ideologies, from anti-communism and the free market to protectionism and welfare. It has pandered to whatever popular prejudices operate at the time, moving from a cold war mentality to one of nationalism versus globalisation. But one aspect has been consistent throughout, a virulent anti-immigration policy, particularly toward non-white and Muslim people coming from North Africa and the Middle East.

While Marine certainly looks more moderate in front of the cameras, she has faced prison for inciting racial hatred. In analysing her speeches, academic Cécile Alduy, suggests that she is driving Islamophobia in public discourse through ‘semantic takeover’.  The French principle of laïcité (strict separation of church and state) has been used to justify attacks on public expressions of Islam such as wearing the Niqab or the Burqa, and these expressions have subsequently been restricted by a number of laws.

Electoral results have been steadily rising for the National Front, which for years was considered ‘beyond the pale’ due to the controversial figure of Jean-Marie Le Pen who repeatedly played down the significance of the Jewish holocaust. But in 2014 they secured gains which saw them become France’s largest party in the European parliament.

Like some right-wing parties in the UK, they play on anti-European sentiment, fears and xenophobia over immigration and, of course, terrorism. After the 15 November attacks in Paris, Socialist party leader President Hollande clawed back his previously declining popularity with warlike speeches and renewed fury in bombing Syria. However, this has not helped his party, which in the first round of regional elections has secured only 22.7% of the vote, trailing behind both the National Front and the Republican party. It appears that the National Front will always be willing to go one step further in divisive rhetoric.

But there is a gulf between the beliefs of National Front voters and the majority of the French people, such as the prevalence of anti-Semitism among the former’s die-hard supporters. The National Front has been at the sidelines of French politics for much of its existence, and that’s because a lot of its message is pretty hard to stomach.

There is the distinct possibility that people are using the first round of the regional elections as a protest vote, and that though the National Front may be able to capitalise on the climate of fear by pandering to common prejudices, it is unlikely to secure them victory.