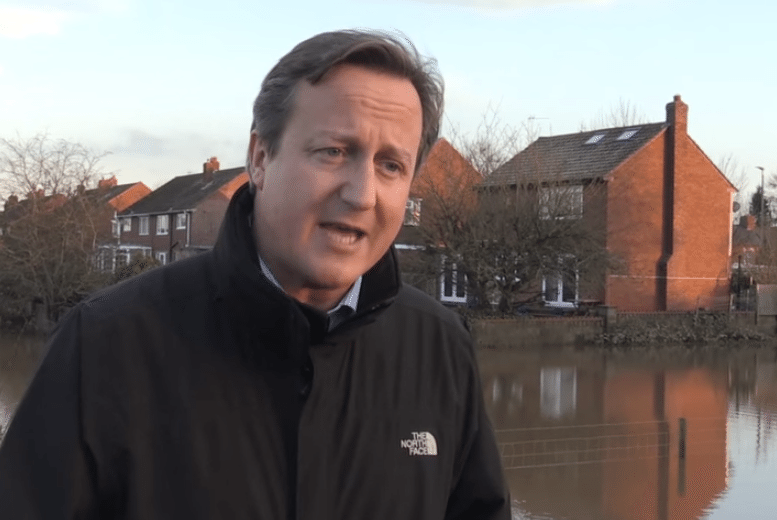 Thousands have been forced to leave their homes because of flooding in Cumbria and other parts of the UK, and more than 60,000 are without power. The inundation followed record-breaking rainfall, but, as climate change squares its shoulders, that’s to be expected.

.@jeremycorbyn says #floods and storms in the UK are "consistent with scientists' warnings of the effects of global warming"

Before visiting the devastated area, Cameron chaired a meeting of the Civil Contingencies Committee, also known as COBRA. The committee responds to any major crisis and has special access to cross-department resources. It’s the second time COBRA has gathered on the subject of flooding – which makes you wonder what on earth they did last time? We’re not just talking about one meeting: it was three months of meetings all through the winter of 2013 – 2014. Funding for flood defences then stagnated.

As George Monbiot points out there has been active resistance to flood strategies that actually work, and Osborne has leeched millions from infrastructure. The former Tory environment secretary was actually a climate change denier – as Labour MP Kerry McCarthy wasted no time pointing out in this video.

Knowing all this how could Cameron visit Cumbria and expect people to take his platitudes seriously? Imagine him in wet socks, practising his empathy face in front of the bathroom mirror. During this video (1:20) he comes up with the stunning assessment that:

But the amazing people in the areas affected have managed to maintain their sense of humour.

Those poor people in Cumbria. Not only have they had to endure the dreadful trauma of the floods, now they are threatened with a visit from David Cameron

If a crisis could be solved with a photo op #DavidCameron would be a great prime minister but they are not https://t.co/LXqKYbcfV7 #floods

It’s amazing that people found refuge in humour when they are facing such a calamity.

Some brass neck of Cameron to visit flooded areas after draining spending on flood defences. Must think he can walk on water

What is the point in govt ? If they only look after elite tax avoiders ? Desmond flooding: PM urged to fund repairs https://t.co/7XOt06XkVo

As Corbyn pointed out in the message below, people have shone through this disaster – including the emergency services who are also desperately understaffed and underfunded, and must have had to leave their own families in crisis.

Our hearts go out to the hundreds of people whose homes have been flooded due to Storm Desmond.
Read my statement: pic.twitter.com/Wn6IzwELEU

That this unprecedented rain resulted in disaster is not bad luck and bad weather. Both the rain and the flooding were predicted. This is a massive failure of infrastructure, and infrastructure is the government’s responsibility. It is a failure symptomatic of the ignorance and scientific illiteracy of those in power. How else could they be divesting from green energy and centralising power to prevent fracking sites from being questioned locally?

@GeorgeMonbiot @simonfspeak No-one in the cabinet has a science degree either.
In fact only 39 of 650 MPs have a science/engineering degree.

People in the flooded areas have no light, no heat and no homes. Hospitals are battling to stay open, many schools have closed and there is no public transport. The underlying failure brought about by disinvestment in social services is the real consequence of Tory rule. This government doesn’t need climate change to help them achieve disaster.