Osborne boasts about bombing Syria. His choice of words is disgraceful - Canary 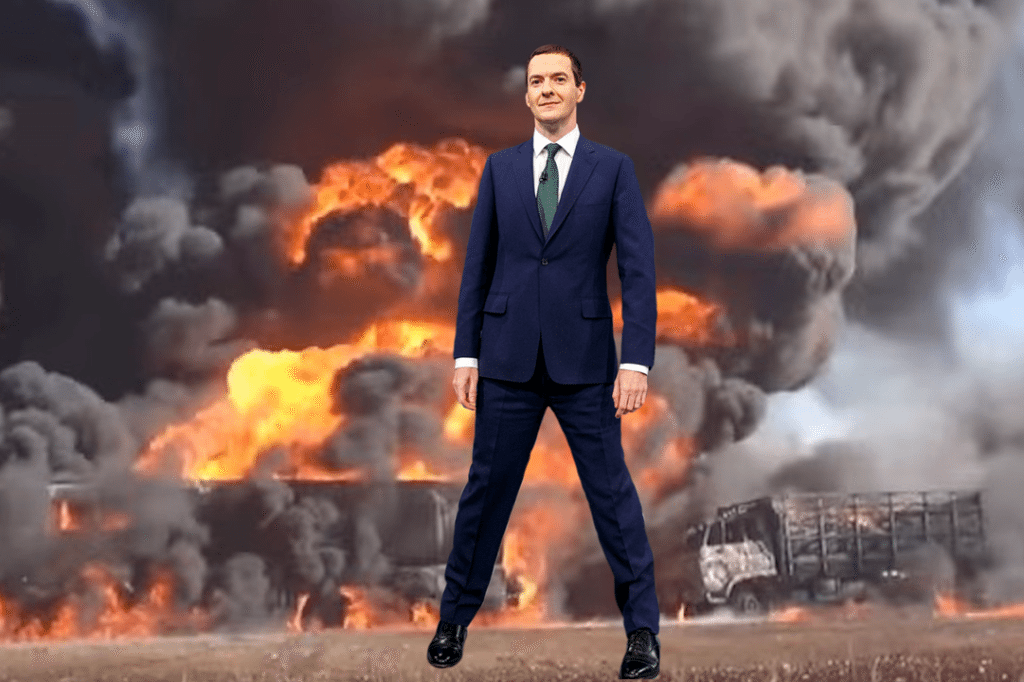 George Osborne, keen to promote himself to the US as a UK Prime Minister-in-waiting, has belittled the seriousness of the Syrian conflict with a foolish throwaway comment.

In an article for the Wall Street Journal and again in a speech to the Council on Foreign Relations, the Chancellor of the Exchequer expanded on his usual financial theme to suggest that the UK’s decision to join the air campaign against Daesh (Isis) in Syria marks it out as a strong player on the world stage alongside the US.

“Britain has got its mojo back,” he crowed, painfully unaware of just how monstrously insensitive that would sound to the already-traumatised people of Syria having to deal with more sound, fury and destruction raining down from the skies. It is also a desperate embarrassment to the significant numbers of British people who do not support the air strikes, as well as to those who do, but see it as an unfortunate last resort. He claimed it was “a source of real pride” that the vote had been passed.

Such language, coupled with the gleeful way he writes about the UK’s increased military spending, will only enforce the sense that Cameron and Osborne have never quite outgrown the playground desire to play soldiers. Cameron has been humiliatingly slapped down over his cavalier attitude to military matters in the past and his close association with Osborne means he is likely to be tainted by the Chancellor’s foolhardy choice of words.

Osborne’s overall argument, that the UK can now “reassert western values” and “project influence abroad … because of the difficult decisions we have been taking to restore economic security” will ring hollow for all those caught on the wrong side of his cack-handed chancellorship. It is difficult to imagine him receiving too much applause from soldiers at the lower end of the pay scale who stand to lose £2,000 per year as Osborne tilts the economy even more steeply in favour of the rich.

To claim that the UK can now afford to bestride the world thanks to our marvellous economy shows that Osborne is wilfully ignoring his own goals of deficit reduction and collection of taxes, as well as the instability of a deeply unbalanced ‘economic recovery’ driven almost entirely by unsustainable private debt. He is also choosing to ignore the damning words of former Prime Minister and Chancellor, John Major, who described the level of inequality in the UK under Osborne’s stewardship as “shocking”.

Osborne is seen as a future leader by many in the US but in attempting to paint the link between the economy and military imposition of the national interest, he appears to be straying into territory for which he can claim no competence. His inopportune invocation of Britain’s “mojo” may well demonstrate to both his US and UK audiences that he is not leadership material at all.