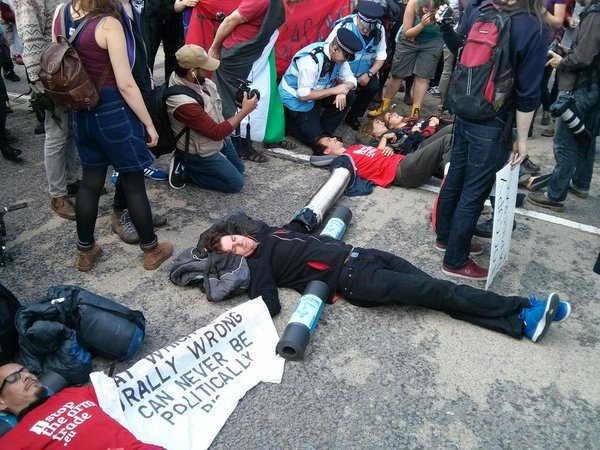 The bombing of Syria has started, and it’s easy to feel both despondent and angry as yet again the UK is dragged into a conflict opposed by the majority of the population. It can be hard to know where to place these emotions, and how to make a difference. Here are a few ideas of where to begin:

The often used adage “the first casualty of war is the truth” is always worth remembering. But the ever astute John Pilger points out, really “journalism is the first casualty”.  He writes:

Not only that: it has become a weapon of war, a virulent censorship that goes unrecognised in the United States, Britain and other democracies; censorship by omission, whose power is such that, in war, it can mean the difference between life and death for people in faraway countries, such as Iraq.

Do read critically and look at sites, such as The Canary, for critical analysis of what the mainstream media are reporting. With social media, there are now many more avenues for accessing information than there were, for example, when bombing started in 2003. By sharing articles which offer an alternative perspective, and speaking up about our views in our own families and friendship groups, we can engage in the national and international conversations, online and offline.

2. Solidarity and help for refugees

The refugee crisis is ongoing and could potentially get worse from increased bombing. Over 700,000 refugees have arrived in Europe, and over 3,000 people have died making the journey. Once there, they have to endure harrowing conditions such as those reaveled in this heartbreaking account from Caoimhe Butterly, working in Lesvos.

Meanwhile, 4 million refugees have fled to Turkey, Lebanon, Jordan, Iraq and Egypt. There have only been 104,410 resettlement places offered, covering a mere 2.6% of the refugee populations in these countries.

It is vital we continue to highlight and offer support to the victims of this conflict. Whether it is continuing to collect donations for those in need, volunteering in crisis areas, or putting pressure on the government to accept more refugees. These are areas where we can really make a difference. Furthermore, showing compassion, solidarity, and giving practical help are some of the best ways to counter warmongering.

3. Join a local group and get on the streets

There have been protests across the country over the airstrikes, with many local groups coming together to express their outrage. This is also a good opportunity to meet like-minded people, overcome a sense of isolation, and form new alliances. The Stop the War Coalition have details of some of these events, and have called for a national demonstration in London.

However, whilst marches are good for raising awareness and bringing people together, an even more effective action is to target those who are profiting from war – the arms dealers. BAE Systems, who are one of the shareholders in the company which makes the Brimstone missile, have seen a steady increase in their profits since the UK parliament voted to join the attacks in Syria. They are based in 55 locations across the UK, and there are plenty of other companies as well.  Campaign Against Arms Trade also have a list of local groups you can contact to find out what you can get involved with in your area.

When the UK government began its attacks on Iraq in 2003, many people took to military bases to protest the war. At Fairford in Gloucestershire, fences were pulled down, and protesters invaded the base.

Other actions included two people causing thousands of pounds worth of damage to planes at Fairford. Whilst they were eventually convicted, they were able to use the subsequent court cases to generate publicity and debate over the legality of the war.

Another example of successful direct action took place during the Israeli bombing of Gaza in 2009, when £200,000 worth of damage was caused to the EDO arms factory in Brighton. Activists were later acquitted by a jury after arguing they were legally justified in taking the action as EDO were breaking export rules in selling military equipment to Israel.  Speaking about the acquittal, Green MP Caroline Lucas stated:

I am absolutely delighted that the jury has recognised that the actions of the decommissioners were a legitimate response to the atrocities being committed in Gaza. I do not advocate non violent direct action lightly; however in this situation it is clear that the decommissioners had exhausted all democratic avenues and, crucially, that their actions were driven by the responsibility to prevent further suffering in Gaza.

Arms dealers don’t care about much, but they do care about their profits. Repeated blockades, invasions, occupations and damage to their equipment all have the potential to eat into that profit. As Smash Edo spokesperson, Andrew Beckett, said:

When we started we realised that as UK-based peace activists we could do little to affect the outcome of events in Iraq once war had started, but what we could do was target the bottom line of the corporations that profited directly. In effect we would take the war back to the factory floor.

There are obviously many risks associated with direct action, not least the prospect or arrest and/or conviction. It is worth knowing your rights whatever form of protest you want to engage with. There also many support roles people can help with if they are unable or unwilling to risk arrest themselves.

5. Remember to keep an eye on domestic politics

Okay, so arguably this isn’t something you can do to stop the war, but it is important and worth including. Governments often use the excuse of war and terrorism to rush through draconian legislation which needs to be opposed. Two such examples at the moment are the extremism bill and the investigatory powers bill. An increasingly illiberal surveillance state, and the branding of even more people as extremists will do nothing to make people safer, and will only serve to further criminalise communities already facing repression and racism.

The bombing may have started, but so has the resistance. These ideas are just a few starting points, things we can start thinking about to oppose this war. During the coming weeks, there will be a few challenges, not least will be staying strong and hopeful. However, through thinking critically, and engaging creatively, we can have an impact on this war.