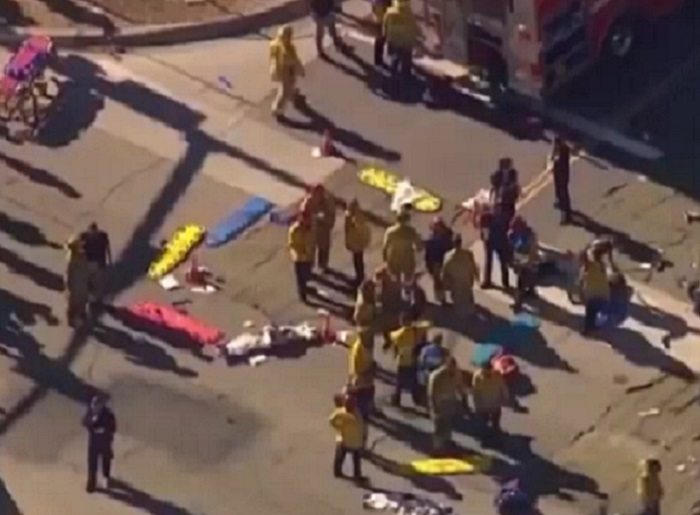 Yet another mass shooting has blighted the streets of a nondescript North American town in California. The mass shooting in San Bernardino makes it the 355th in the US this year. The Mass Shootings Tracker has recorded over 5 of these tragedies daily on occasion.

Fourteen people were killed at the Inland Regional Centre in California where one of the two shooters, a man and wife team, had worked as a San Bernardino public health inspector. The victims names have yet to be released. The San Bernardino’s shooting is the worst since Sandy Hook.

The internet has wrestled with a debate over whether it is right to offer your prayers, following assertions that praying is all that lawmakers will do as they line their pockets with money from the gun lobby.

Your "thoughts" should be about steps to take to stop this carnage. Your "prayers" should be for forgiveness if you do nothing – again.

Journalist Igor Volsky brilliantly called out public figures who receive cash from the National Rifle Association. The NRA is the biggest hitter of the pro-gun lobby. Volsky dogged specific messages of condolence for those affected by San Bernardino with actual figures:

NRA spent 2.4 MILLION in independent expenditures in 2014 to win the North Carolina Senate seat for @ThomTillis

Another one of his tweets read,

Volsky was later interviewed on MSNBC:

.@igorvolsky: "The NRA pays [lawmakers] to only think and pray about gun violence & not do anything else about it" https://t.co/BnvqNhnaeK

America waits to find out whether San Bernardino’s shooting is another religiously motivated crime, like the Planned Parenthood attack. The shooter has been identified as Muslim, and the press (to their credit) are being extremely careful not to call it terrorism. So far. Presidential hopeful Senator Carson, has called the shooting a ‘hate crime’.

The NRA fight passionately against all regulation of gun ownership, but in this case California’s gun laws are stricter than most states’ so regulation is not the answer. There is, of course, an obvious solution to gun violence: getting rid of guns. It is not nearly so complicated as the politicians would have people believe, but it requires a moral courage they lack. They calculate that the cost to certain individuals would be too high, so they allow ordinary people to go about their lives, with the danger of dying in terror instead.

If Americans really want to ensure their second amendment right is honoured, which is designed to protect them from an aggressive state, the best thing they can do is get rid of these cowards, and their guns, as John Oliver so masterfully demonstrates in the clip below.