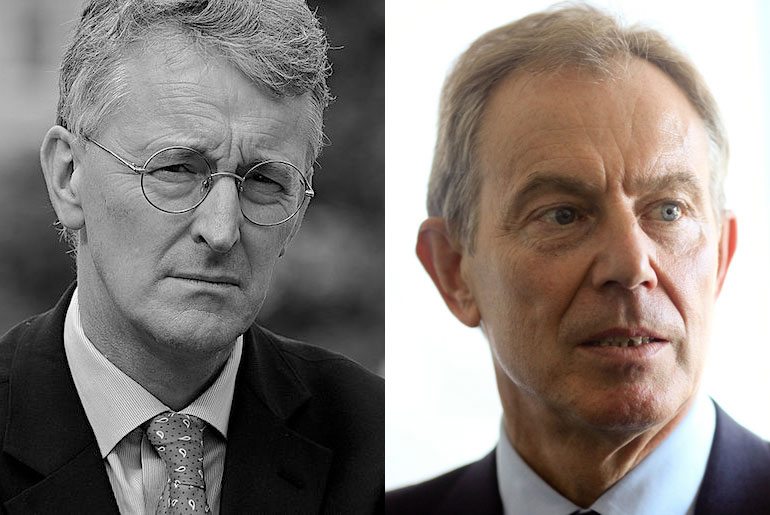 Hilary Benn’s speech urging fellow MPs to vote for air strikes on Syria was rabble-rousing, eliciting cheers from all sides of the house. But as John McDonnell has pointed out, the shadow foreign secretary’s rhetoric owed a lot to Tony Blair’s speech just before the Iraq invasion.

I thought Hilary, his oratory was great. It reminded me of Tony Blair’s speech taking us into the Iraq War and I’m always anxious about the greatest oratory is going to lead us to the greatest mistakes as well.

When presenter Nick Robinson pointed out the comparison might not be “the greatest compliment” coming from McDonnell (who has called Blair a war criminal), the shadow chancellor replied:

I’m just saying sometimes the greatest oratory can lead us to the greatest mistakes and that’s what it did in Iraq and I fear we made the mistake last night.

McDonnell is right. The two speeches have more in common than the fact they both elicited inappropriate cheers and probably persuaded undecided MPs to vote in favour of military action. They were also both thin on details about the military action they were proposing, its efficacy or its alternatives. Instead, they relied on emotive language to invoke the barbarity of the enemy and inspire passion for their causes.

Nobody in the House of Commons on Tuesday night would have been unaware of Daesh’s brutality. What was at stake in the vote was not the nature of Daesh’s terror, but how best to stop it. Yet Hilary Benn gave over a large part of his speech to listing graphic examples of barbarity, for example:

We know that in August the 82-year-old guardian of the antiquities of Palmyra, Professor Khaled al-Assad, was beheaded and his headless body was hung from a traffic light.

This was straight out of Blair’s book:

Just last week, someone slandering Saddam was tied to a lamp post in a street in Baghdad, his tongue cut out, mutilated and left to bleed to death, as a warning to others.

The intention in both cases is clear and disingenuous: if you are against brutality, you must be for military action.

We must play our part

Both Benn and Blair made the case for multilateralism, and both talked of Britain’s obligations to its allies. But the nature of these obligations wasn’t explained; instead, the appeal was entirely emotive.

And if we do not act, what message would that send about our solidarity with those countries that have suffered so much, including Iraq and our ally France? Now France wants us to stand with them, and President Hollande, the leader of our sister socialist party, has asked for our assistance and help. […] should we not play our full part?

Blair was brilliant at summoning the epic when pitching his battles. In his 2003 speech, he painted the battle faced as one of good against evil, citing “the darkness” closing over Iraq’s people and the “regime whose mind is in fact evil.”

But Benn outdid him in summoning the epic on Wednesday:

And we are here faced by fascists. […] And what we know about fascists is that they need to be defeated. And it is why, as we have heard tonight, socialists and trade unionists and others joined the International Brigade in the 1930s to fight against Franco. It’s why this entire House stood up against Hitler and Mussolini. It is why our party has always stood up against the denial of human rights and for justice. And my view, Mr Speaker, is that we must now confront this evil.

It is easy (and disingenuous) for proponents of war to paint military action as real action and diplomatic action as inaction – and both Benn and Blair succumbed to this temptation.

Blair’s 2003 speech was peppered with references to strength and weakness. We must “summon the strength,” he said, to act. If we turn back, he said, terrorists will see that “the will confronting them is decaying and feeble.” “This is not the time to falter.”

Like Tony Blair’s speech, Hilary Benn’s was skilled and powerful, reminding both the country and MPs that he has inherited his father’s oratory skills – if not his political beliefs. More importantly, the speech – delivered less than three weeks after Benn all but ruled out backing UK air strikes – also pointedly reminded MPs that there is a serious contender for the Labour leadership waiting in the wings should Jeremy Corbyn falter.

And, like Blair’s speech, it was successful. We don’t know how many Labour MPs were swayed by Benn’s speech, but 66 Labour MPs ended up voting with the government, backing David Cameron and dragging the UK into another endless war. John McDonnell is absolutely right to suggest that Iraq was one of “our greatest mistakes” – and he is absolutely right to suggest that history is now repeating itself.