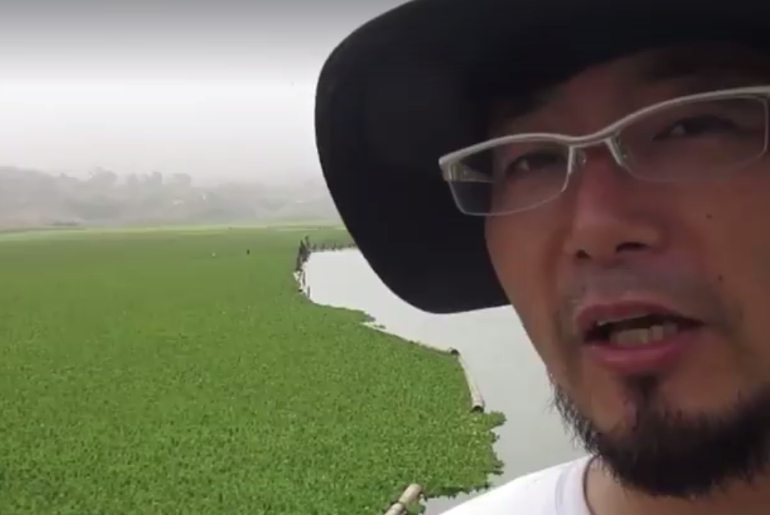 A Peruvian scientist was so upset about the pollution of Lake El Cascajo, that he personally decided to do something about it. Using his skills in bio industrial science and water treatment he devised a strategy using nanotechnology to clean up the lake, and used his own money and time to do it.

In late 2010 Professor Marino Morikawa, of the University of Tsukba in Japan, received a call from his dad who still lives in Peru. Lake El Cascajo, where he and his young son used to spend time together, was in serious danger of being destroyed due to pollution.

The lake also known as a humedal (Spanish for wetland) was known in the 1990s to be a home to over a thousand species of migratory birds. Morikawa recalls the time he spent their as a child, as reported in Plano:

Since I was a small child, 3 or 4 years old, I remember fishing with my father at sea, which is 100 meters from the area where the humedal was formed. After fishing, my father used to take me to the lake to see the flamingos, it was a fabulous show.

When Morikawa arrived in Peru to see El Cascajo for himself he found it in a sorry state. The waters were starved of oxygen, overloaded with pollutants, and an aquatic weed was running rampant over the water covering 99% of the surface. A sewer system had been built within the confines of the wetland, which collected then poured untreated waste straight into the sea. And around 50% of the land, which was part of the wetland, was being unofficially used by farmers.

Worst of all, this once bountiful place for wildlife, was no longer a home to the many migratory bird species.

Nanobubbles to the rescue

Morikawa convinced the local authorities, who were doing nothing to protect the area, to allow him to start a recovery project using a nanotechnology known as ‘nanobubbles’.

Ordinary bubbles, like those in a glass of fizzy pop tend to quickly rise to the surface and burst. As the name suggests nanobubbles are tiny, roughly a thousand times smaller than those found in fizzy pop and their small size allows them to stay in the water for longer and move around randomly due to brownian motion.

This longer life and a static charge placed on the nanobubbles allows them to attract bacteria, and metals which stick to the surface. Eventually the bubbles decompose releasing free radicals which can also destroy any viruses present in the water. Biofilters were also used to speed the clean up of the water, and the wetland area was divided up for staged removal of the aquatic weeds.

Morikawa has returned to Peru over 20 times to complete the work, initially working alone and eventually being helped by friends and local people sharing his concerns for El Cascajo. But not only did he have to work alone at times, he has also had to foot 90% of the work’s cost.

In January 2013 “a miracle happened”, says Morikawa. The birds returned, thousands of them, occupying around 70% of the reclaimed area. Currently the waters of El Cascajo are around 90% recovered, with 70 species of birds and 5 species of fish inhabiting the lake ecosystem.

After the success at El Cascajo Moriwaka is keen to perform some more miracles. Cleaning up Lake Titicaca and the Chira River are next on his list.

Get Involved!
Read more about the Environment from The Canary