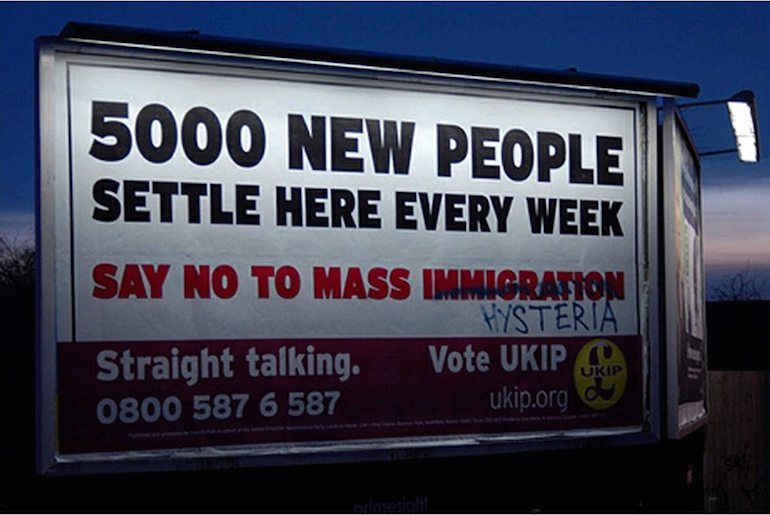 In a plan to encourage ‘unity’ in society, UKIP leadership hopeful Lisa Duffy has declared that she supports a ban on Muslim women wearing a veil in public, believing it would help Muslim women feel more ‘British’. But her apparent attempt to encourage integration in Britain has backfired. In fact, Duffy has inadvertently helped to highlight the ever growing divide in society and the reason behind it.

Duffy supports a plan to ban the veil in public. Likening the veil to a hoodie or a motorbike helmet, she says:

On our public transport networks, in public buildings, banks, stores and shopping precincts. All those places where teenagers are told to take their hoodies down and where motorcyclists are expected to remove their helmets. It is only reasonable to expect everyone to show their faces.

Duffy is not the first UKIP politician to suggest banning the full-face veil (or ‘niqab’). And several countries have already banned it in public places. France was the first country in Europe to do so in 2011. Belgium quickly followed behind.

Regarding claims she plans to single out Muslims, she said:

This is about working to make sure we have a well-rounded community, a community that has an opportunity for all.

As UKIP leader, if I’m fortunate enough to get elected, I want us not to shy away from difficult issues and I’m not going to be hounded into a corner to be made to feel this is the wrong thing to talk about.

There is a fear out there and that is unfair on all Muslims.

But despite claiming to support integration and unity, Duffy’s speech inadvertently highlighted an altogether different point. The ever-present gap between different sections of society. She said:

Most Muslims are good individuals, they work hard, they have great families and they contribute to our communities.

This is about us working together to make sure there is an equality within faith groups and that they have the same freedoms that you and I both share.

Whatever her intentions, Duffy’s words reinforce the ‘them and us’ mentality that works to mark the word ‘Muslim’ as something separate and isolated from the collective ‘British’ community. She brands the community by their faith and directly compares them to “you and I”. Who are the ‘you’ and ‘I’ that Duffy refers to? It is the white Briton who takes centre stage as the pronoun?

Some have praised [see comments] Duffy for raising such an issue and suggest she has a valid point. But many have responded by calling Duffy’s proposal racist and “fear mongering“.

Hamza Yahya, a member of the Tell MAMA Facebook page (a group that monitors anti-Muslim hate), suggests that Duffy’s proposal “is by far the best way of taking someone’s rights away”. Subah Akhtar, meanwhile, suggests that Duffy confuses religion and culture, saying:

This is where a lot of Western people confuse religion with culture. Islam respects and values women, we are equal in Islam. It is the cultures that create this second class image of women and oppression of women.

Duffy’s controversial proposal has caused a heated debate. Yet no one seems to be addressing the bigger problem about how she identifies and separates the Muslim community from the rest of Britain. Or how this is common practice in British rhetoric.

Take David Cameron’s bid to help ‘educate’ non-English speakers. It had disastrous effects, with Cameron segregating poorly educated Muslim women. He ended up linking them to extremism and stigmatising the whole community.

Perhaps more worryingly, due to its influence on society, the media is also full of articles reiterating the ‘them and us’ mentality. Take the infamous incident in which The Mail on Sunday linked a criminal act to a Muslim community, despite the faith of the perpetrators being both unknown and irrelevant. Likewise, in its coverage of the Nice attacks, The Independent ran the headline: “Many Muslims reportedly among 84 killed by lorry”. It did not identify any other victims by their faith.

With over 90% of stories about Muslims being negative, it is not surprising that Islamophobia in Britain is growing.

These rising levels of racism and Islamophobia in Britain cannot be ignored. Tell MAMA reported a 326% increase in incidents in 2015, with the number of incidents apparently growing since the Brexit vote.

It is clear that public discourse affects public opinion. By not addressing this, we will continually be plagued by the ‘them’ versus ‘us’ ideology. The more people use it, the more people will see a divide – one which harbours a sense of fear towards the ‘other’ and contributes to an increase in hate crime.