Jeremy Corbyn and supporters branded 'Nazis' by millionaire Labour donor, in the paper that backed Hitler [EDITORIAL] - The Canary

Over the weekend, the Daily Mail published a piece by millionaire Labour donor Michael Foster – in which he smeared Jeremy Corbyn and his supporters as Nazis. In the tough battle to find the lowest ebb reached by this toxic coup, this despicable smear will be difficult to best.

As The Canary’s Alex McNamara writes:

This whole anti-Semitic ‘thing’ is just getting way out of hand now. And perhaps I’m in a fairly unique position to challenge Mr Michael Foster on his grotesque commentary. I have Jewish ancestry; my father was an Austrian Jew relocated to Britain during WWII. His family were actually wiped out by Nazis in the Holocaust. So I’m unwilling to take lectures on anti-Semitism from the paper who opposed Britain offering my father sanctuary at the time.

And McNamara is right. Indeed, this is how The Daily Mail wrote about Alex’s father – along with other Jewish migrants who fled to Britain during the Nazi holocaust.

Not only did the Daily Mail propagandise against the incoming Jewish families, but they spent years cheerleading for fascism in general, and Hitler in particular. In 1934, the paper’s owner Viscount Rothermere wrote an editorial personally inviting Britons to embrace both.

And in case anyone thought The Mail had mellowed in the intervening years, let’s recall how their cartoonist characterised modern day migrants fleeing civil war in Syria.

One is a Nazi cartoon mocking fleeing Jews denied entry to democratic countries. The other is the Daily Mail today. pic.twitter.com/1bdG3vxeBm

And yet it was to this paper which Labour donor Michael Foster turned to make his pronouncement that Corbyn and his supporters are equivalent to Nazis. Foster claims:

We are asked to accept wave after wave of inappropriate, democratically damaging and wrongful actions by the Corbynistas as the new way by which politics will be conducted.

No allegations (other than those already dismissed as untrue) are made by the former Labour donor to support this assertion. A strange case to make, considering it is around 130,000 suspected supporters of Jeremy Corbyn who are being disenfranchised by the party. Speaking of the court decision to first back Corbyn supporters in their fight against the NEC and later to support the purging of new members from the leadership election vote, Foster writes that the:

decision [first] advantaged Corbyn and his Sturm Abteilung (stormtroopers), but on Friday afternoon the Appeal Court handed down a big decision for British democracy.

In case anyone was left feeling that the Nazi comparison had been made with insufficient strength, The Mail even added in a picture of actual Nazi SA troops for colour. 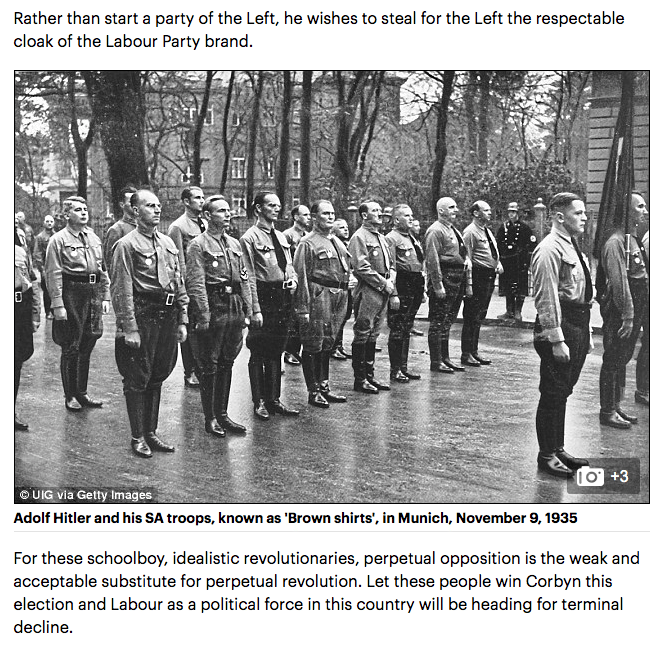 So not satisfied with labelling people who plan to vote for Jeremy Corbyn as jihadists, sexists, and antisemites – now they are akin to Nazis. People planning to put a cross in a box for a progressive socialist are being likened to a party which committed mass murder of socialists, along with other ‘untermenschen’ including Jews, sick and disabled people, and political opponents. Not only does this come very close to hate speech, but it diminishes the lived experience of those who have felt the very real effects of the holocaust and modern day prejudice and bigotry.

It is especially ironic from a group which accused those making parallels between ethnic supremacy, apartheid, and occupation in Israel with elements of 1930s Germany of being ‘Jew baiters’ and antisemites – even if they happened to be Jewish themselves.

This whole thing is a sorry replay, in louder and angrier voices, of the leadership election of 2015.

In the 2015 leadership election, when it became clear that Corbyn might actually stand a chance of winning, Harriet Harman planned to cull over 100,000 so-called ‘infiltrators’ from the vote. Overnight, self-appointed voice-of-the-left Polly Toynbee, The Guardian editorial team, and most of the press (right and liberal) began busily character assassinating Corbyn and anyone who would give him their vote.

But despite all efforts, Corbyn won with the biggest mandate of any party leader in history – including Tony Blair in 1994. The ‘unelectable’ Corbyn galvanised a thumping majority against a hostile media, commentariat and even parliamentary party.

Unable to live with this outcome, the Parliamentary Labour Party (PLP) and their backers mounted a coup which they hoped would bypass the membership. Their mass resignation stunt after the Brexit vote was intended to oust Corbyn. Instead, he stayed put – and the membership, most unions, and an overwhelming majority of Constituency Labour Parties backed him too. The 172 mutinous MPs remain in opposition to more than half a million party members, using the courts to suppress their right to vote – and they have the bare-faced audacity to label others ‘anti-democratic’.

The permanent political class under threat

Whatever your position on Jeremy Corbyn, there is something very, very wrong here. It is no small concern that our entire media, commentariat, political and pundit class are operating a smear campaign of such hostility against a democratically-elected politician, running on a progressive platform, with a diverse and popular mandate.

It is becoming ever more clear that the PLP in Westminster has become a part of a permanent political class alongside their Tory and Liberal Democrat counterparts. Disengagement and voter apathy means a fairly stable job, a few seats lost and won either way each election, and no big surprises. The chance to earn a great wage and pass policies which guarantee lucrative consultancy/director roles after politics. All done with the passive acceptance of a disaffected electorate, half of whom don’t even bother to vote anymore. To this permanent political class, a popular movement based on social democratic values is about as welcome as a fart in an elevator.

The permanent political class is freaking out because the only thing that can beat out Project Fear, is Project Hope. A Tory-lite Labour opposition was and is never going to win in 2020 (or before), but an energetic and awakened Labour movement can. Even worse, if they do win, there is a very real chance that the domestic and foreign policy of Britain could transform in a truly radical way. We could be a few months or years away from the most progressive government since Clement Attlee’s post-WWII government delivered the NHS, a national education system, nationalised transport and energy, and rolled out the biggest social housing programme in our history. This is an electoral choice that the UK hasn’t had the opportunity to make in decades.

The permanent political class is facing the most real and present threat to their power since 1979. They are going to throw every weapon in their armoury at ensuring that doesn’t happen. But none of those weapons is more powerful than a tight-knit, grass roots movement with its eye on shared vision of an inspiring future. They don’t fear Corbyn because he might be unelectable, they fear him because he, and the movement he represents, might be unstoppable.