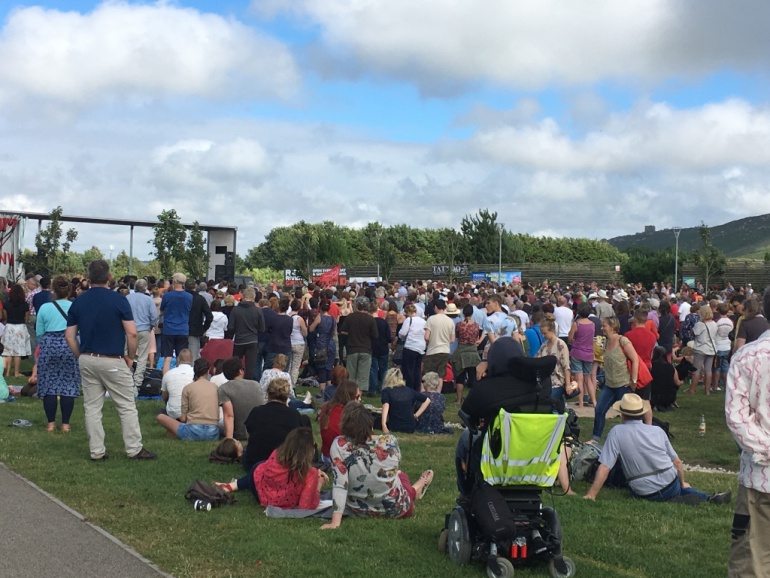 In his diatribe in The Mail on Sunday, Michael Foster accused Jeremy Corbyn and his supporters of being “Nazi stormtroopers”. But his piece wasn’t only offensive. It was also absolute rubbish.

The problem for Foster is that I both live in Cornwall and attended the same rally that he did. And the problem with his article is it is full of inaccuracies and manipulations from the outset.

Foster begins his article by calling Camborne – which is near where the rally was held – his “home town”. Technically, Foster lives on the edge of the Camborne and Redruth constituency. But while Camborne is one of the poorest places in the UK, and suffers extreme poverty, Foster lives thirteen miles away in Port Navas.

Unlike Camborne, Port Navas is the beautiful ideal that people think about when they imagine Cornwall. Attractive houses on picturesque creeks. Unfortunately, with average property prices of £633,500, it is far out of reach for most Cornish residents who can’t afford Cornwall’s average property prices of £210,000 – 10 times the average wage in the area. Foster’s own house is said to be worth £1.5m.

In his second sentence, Foster begins the portrayal of the rally itself:

A crowd of 2,000 disciples came from all over Cornwall to cheer and clap and worship.

One after another, Momentum speakers praised ‘Jeremy’ and spoke of the hope he gave them, the socialism he would bring to Britain.

Firstly, as I have previously written, there is the fact that thousands of people were motivated to turn up to listen to a political speaker in Cornwall. I’ve helped to organise political events in Cornwall and it’s considered a success if hundreds of people turn up, let alone thousands.

Furthermore, they weren’t all disciples of some unknown socialist utopia. Whether it was my family (who have never all attended a political rally with me in the 25 years I’ve been going to them), parents of my son’s school friends, neighbours, or family friends we hadn’t seen for ages – none were hard-line political activists. They were just people who genuinely care about what is happening to their communities. They’re the people who, finally, see a real political alternative in Corbyn.

Neither was there evidence of the speakers being hard-line Momentum supporters. The majority of them were local people who spoke about issues such as the housing crisis in Cornwall; how difficult it is to rent somewhere in a market where so many properties are only available for six months in the winter before they’re rented out at extortionate rates to holiday makers.

Yes, some of the speakers were inspired by Corbyn. But they weren’t Trotskyites, and much less Nazi stormtroopers. They are people like Leah Browning, who spoke about how she has been inspired to take action in her local community:

I was inspired to campaign against austerity and ease the effects of austerity in my community. We source clothes  – pre loved children’s clothes and we redistribute them to those in need. We do fundraisers for local charities, for local initiatives. We do all we can to support initiatives to ease food poverty.

Was a Nazi attitude evident in the teacher who spoke about how schools have been decimated by the Tories?

Our classrooms should be teaching kindness, curiosity, determination, hope, openness and respect as well as a life long love of learning and the skills that will allow people to flourish and blossom and fulfil their potential.

In spite of all this, Foster then went on to claim:

Then the mood got much darker, with each speaker declaiming their personal persecution by unnamed sources and to round it off, all but one named me as the villain who via the courts had tried to rob them of their right to have Jeremy Corbyn as the Leader of the Labour Party.

The truth is that there was no ‘darkening of the mood’. Nothing threatening was said. Nothing sinister. The only darkness came from the fact that speaker after speaker addressed the very real poverty faced by people on a daily basis and the devastating impact of austerity upon our communities. Of course, there were references to the machinations of the Labour Party. But given current circumstances, it would be a pretty strange if there had not been. And these were not the focus of the speeches.

It is not surprising Foster was referenced at the rally in Cornwall. He stood to be an MP in the 2015 election in the constituency where the rally took place, and he lost to the Conservative candidate.

So, at a rally organised by Corbyn supporters and attended by those who wanted to hear Corbyn speak, it would be a little odd if the man who attempted to use his wealth to take the Labour Party to court to stop Corbyn appearing on the leadership ballot paper wasn’t mentioned.

But any mention was brief, non-threatening, and in passing. In fact, it is Foster who has an alleged record of using threatening and bullying in the local area.

During a hustings event in 2015, Foster is said to have called Mebyon Kernow candidate Loveday Jenkins a c**t, and to have threatened to “destroy” her. According to Ms Jenkins:

He asked the audience if they knew anyone with a Cornish house worth £1 million. The audience then collapsed with laughter when I pointed at him. He didn’t appreciate that and I said to him, ‘I only pointed at you because I know you’ve got a million pound house’.

Then he said, ‘Yes I do and there’s nothing wrong with that’. Then, while it was my turn to speak, I heard mutterings from the side when he used the c word repeatedly. He might not have been saying it to me, but I heard it emanating from him while I was speaking.

Ms Jenkins further stated that at the end of the hustings:

He turned on me at the end, away from the microphone, and said, ‘If you pick on me again I will destroy you’.

This was not the only accusation Foster faced of bullying and threatening behaviour during the campaign. In 2014, he was accused of throwing a phone at MP Sheryll Murray during filming for the BBC. The incident is said to have happened during a break in filming when there was a discussion over who’s phone had been left on.

Foster threw the phone underarm and caught Murray on the wrist. She said it was “totally unacceptable behaviour” and that she was “shaken” by what happened.

The Canary has previously written about the ‘Nazi stormtrooper’ claims in Foster’s article, with Alex McNamara saying:

This whole anti-Semitic ‘thing’ is just getting way out of hand now. And perhaps I’m in a fairly unique position to challenge Mr Michael Foster on his grotesque commentary. I have Jewish ancestry; my father was an Austrian Jew relocated to Britain during WWII. His family were actually wiped out by Nazis in the Holocaust. So I’m unwilling to take lectures on antisemitism from the paper who opposed Britain offering my father sanctuary at the time.

It’s worth adding that from the perspective of the Cornwall rally, there was nothing antisemitic mentioned in any way whatsoever. In fact, having read the article, I rang my Jewish dad who was also present at the rally to check what his opinion was – and he agreed. To put this in perspective, he often comments on antisemitism in the media and did so frequently over the portrayal of Ed Miliband during the last election.

From his record, Foster appears to have a history of bullying and throwing money at things to get his own way. And this has included heckling Jeremy Corbyn for his principled stance on Palestinian rights.

His latest article is another example of this bullying. To portray those who attended the rally as Nazi stormtroopers is deeply offensive, and the article stinks of a sore loser throwing his toys out of the pram.