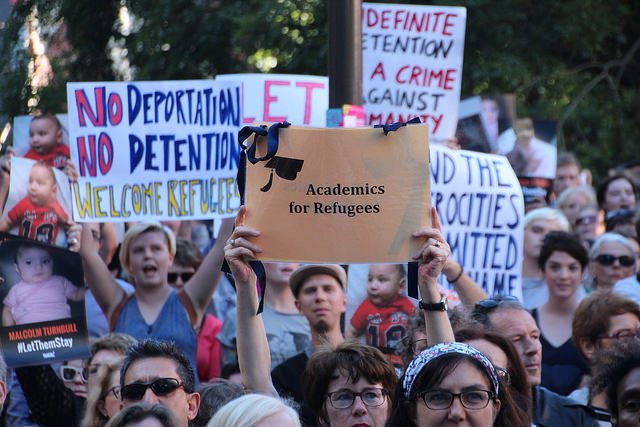 The release and publication by Guardian Australia of the ‘Nauru Files’ shows that Wilson Security, the company managing the ‘security services’ at refugee detention centres on Nauru and Manus Island, has been responsible for downgrading those files – i.e. covering up abuses. The files also show that Wilson Security’s staff were actually the perpetrators of many of the alleged crimes, including child sex abuse and physical assaults.

Wilson Security is contracted to Broadspectrum, which is now owned by Spanish multinational Ferrovial. Senior directors of all three companies, as well as Australian government ministers, could be arrested and charged on a variety of offences – including corporate manslaughter – under the principle of universal jurisdiction.

Australia’s offshore detention centres are nothing less than modern-day concentration camps, where asylum seekers and refugees who have been kidnapped on the high seas are held indefinitely, contrary to all norms of justice. These detention centres have been the subject of criticism in reports by the UN High Commissioner for Human Rights, the Committee Against Torture, the UN Special Rapporteur on Torture, the Australian Human Rights Commission, the Human Rights Law Centre, Amnesty International, and Human Rights Watch.

Legal experts from the prestigious Stanford Law School (USA) have warned that corporate entities (as well as the Australian government) are responsible for the conditions that enabled these crimes – including self-harm and, in two cases, self-immolation (one person – ‘Omid’ – actually lost his life).

The Canary has previously reported on how Ferrovial was warned by these experts that it could face litigation for the activities and mismanagement of its subsidiary companies – Broadspectrum and Wilson Security (a company, incidentally, that the Panama Papers showed had was ultimately owned by two convicted felons in Hong Kong).

Individual officers at Ferrovial might be exposed to criminal liability for crimes against humanity under the Rome Statute.

In July 2016, GetUp!, No Business In Abuse, and the Human Rights Law Centre published a joint report on Ferrovial’s business responsibilities regarding the offshore detention centres.

Ferrovial is no stranger to controversy. Three years ago, it was involved in a dispute with British construction workers when their union, Unite, accused the Spanish multinational of organising the blackisting of workers on the London Crossrail project. A delegation of union members travelled to Barcelona to confront Ferrovial.

The ‘Nauru Files’ are an interactive database that includes more than 2,000 files of recorded abuse that took place at the Nauru refugee centre alone.

There were 156 reports of threatened self-harm involving children, 59 reports of assault on a minor, and 170 reports of “concern for a minor”. During Broadspectrum’s contract period (when it was known as Transfield), there were 300 documented cases of children committing or threatening self-harm, 67 cases of child abuse, 33 cases of rape or sexual assault of asylum seekers, 200 cases of assault, and 30 cases of abuse against Australian staff. And that’s excluding abuse on Manus Island.

Guardian Australia’s Ben Doherty explained in an opinion piece what the files revealed:

They show children left in states of extreme vulnerability and danger: a father, citing lack of proper medical care and his feeling he is “failing as their father and it’s torturing me”, threatens to kill himself and his children on three separate occasions before there is intervention; a girl becomes the subject of more than 60 incident reports that reveal she has been sexually abused and has self-harmed; another girl, aged under 10, also the victim of sexual abuse, undresses in front of a group of adults and invites them to stick their fingers into her vagina.

Some of the perpetrators of these crimes were the same Australian staff employed by Wilson to provide security. The database shows that Wilson staff were also responsible for downgrading incidents so that matters did not appear so bad.

In 2015, an Australian senate inquiry examined many of the abuse allegations and subsequently published a report, providing evidence that could be used against Ferrovial (which owns Broadspectrum) and/or Wilson Security in any litigation raised.

A most shocking death

In April 2016, a most shocking incident took place in full view of everyone at the Nauru detention centre. At the time, UNHCR inspectors were visiting Nauru.

One man – an Iranian refugee simply known as ‘Omid’ – decided to set fire to himself by pouring a 20-litre container of petrol over himself, then setting the liquid on fire. As he burned, he screamed and continued screaming as he was carried away.

This is how tired we are, this action will prove how exhausted we are. I cannot take it anymore.

It was an ultimate sacrifice – a political decision, taken so that the world could see what was really going on at the Nauru centre.

The video below showing what happened to Omid is very graphic. The second part follows at the end of this article.

To compound the tragedy, there were inexcusable delays by the Australian government in getting Omid to a suitable hospital in case his life could be saved. But just over 36 hours later, he died from his injuries.

The refugees held on Nauru and Manus Island are being detained indefinitely and illegally to satisfy the political ambitions of the Australian government. As such, each and every one of those detained can be regarded as Australia’s political prisoners.

Back in May, only days after Omid took his own life, another young man attempted self-immolation at the Nauru detention centre. A 20-year-old, known as ‘Milad’, doused himself with petrol, but was arrested before he could follow through with the act. He is known to have mental health issues, as many detainees do on the 22-sq-km island that is being used by Australia as a human dumping ground as part of its refugee policies. This was the sixth suicide attempt in that same week,

Yet nothing was done to close the camps. The Australian government, which has ultimate responsibility for the camps, continues to bury its head in the sand and do nothing to end this tragedy.

Ben Doherty summed up perfectly why Australia’s offshore detention policy is not only ethically wrong but criminal:

For all of the extreme measures to which the Australian government has gone to keep its offshore detention regime from public eye – moving detention centres to remote foreign islands where compliant local governments keep journalists away; an extreme and unapologetic secrecy about the “on-water matters” of boat turnbacks; legislation to jail doctors and detention centre workers who speak out on behalf of those held; and restricting access for international agencies such as the United Nations – the truth about its remote camps has continued to leak out over the four years of offshore detention. Now, it is laid bare.

At the same time, the UN High Commissioner for Human Rights released a statement saying that:

The allegations contained in the documents [Nauru Files] must be systematically and properly investigated and those responsible held accountable.

But while the Australian courts have a lamentable record in dealing with crimes relating to the offshore refugee processing programme, there is a way in which the courts of other countries can intervene.

Such intervention could come via the principle of ‘universal jurisdiction‘. This principle allows states or international organisations to claim the power to prosecute a person regardless of where the alleged crime was committed and regardless of the accused’s nationality, country of residence, or any other relation with the prosecuting entity. The concept of universal jurisdiction is therefore closely linked to the idea that some international norms are erga omnes (owed to the entire world community) and cannot be set aside (see jus cogens).

Both Australia and Spain officially recognise the principle of universal jurisdiction.

In practice, an arrest via universal jurisdiction is best handled by a leading jurist. And who better to instigate such an arrest than someone like Baltasar Garzon – the man who issued an arrest warrant for human rights abuses against Chilean dictator General Augusto Pinochet (who would have been held in custody had it not been for the intervention of former British Foreign Secretary Jack Straw)?

So Australian politicians and Ferrovial directors beware: one day the courts may finally catch up with you.

– See just three examples of the shocking 2,000 incidents of refugee abuse listed in the ‘Nauru Files’ here, here, and here.