ISIS defeated again in Syria, and the war's just getting started [VIDEO] - The Canary 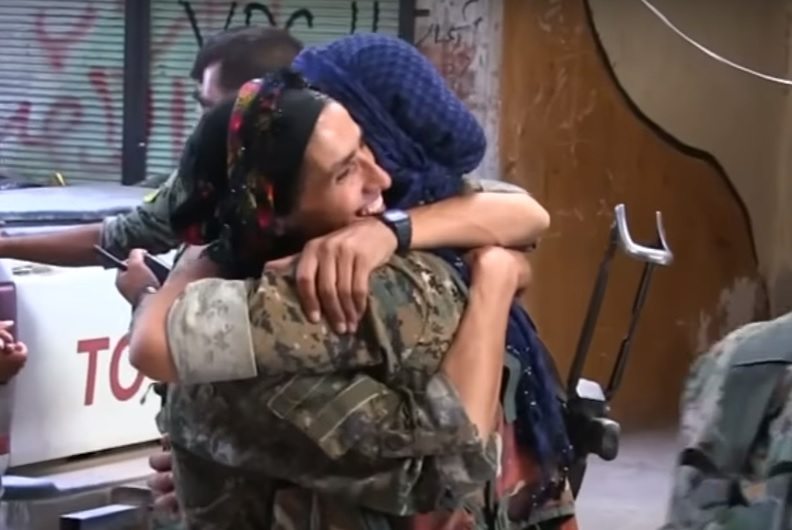 On 12 August, Daesh (Isis/Isil) suffered a massive setback in Syria. After a 73-day battle, it lost the city of Manbij in an assault led by the multi-ethnic Syrian Democratic Forces (SDF). Apart from bringing joy to local civilians, this victory could now also have a domino effect in other areas under Daesh control.

In late May, the SDF – the self-defence forces of the autonomous Syrian region of Rojava and Northern Syria – encircled and entered Manbij. This inspiring offensive had the power to cut off one of Daesh’s only remaining links to Turkey, and thus its supply of new weapons and fighters.

After the liberation of 204 villages, the rescue of 150,000 civilians, and the death of at least 3,000 Daesh fighters, Manbij finally fell on 12 August after almost three years of authoritarian rule. The jubilation of civilians was clear to see as cameras entered the city:

Although Al-Jazeera falsely accused the SDF of burning a government building (which was in fact set alight by Daesh as it left Manbij), the coverage of the Manbij Offensive was generally positive. Media outlets recognised that this was the biggest defeat for Daesh in Syria since it lost the town of Tal Abyad to Rojavan forces back in July 2015. [Tal Abyad is now governed by a diverse group of citizens committed to equality and direct democracy.]

On 13 August, the media covered the return of thousands of displaced residents to Manbij. They also clarified that, although Daesh had “booby-trapped” the city and burned many civilian possessions, refugees were eager to return home.

Sending shockwaves across the world

Rojavan forces were totally ignored and isolated by the international community for over two years until Daesh attacked a highly visible city (Kobanî) on the Syrian-Turkish border in late 2014. Since then, the US has been slowly realising that they are the best bet for defeating Daesh in Syria. As a result, the Manbij Offensive was supported by 648 airstrikes.

According to Barak Barfi, a research fellow at the New America Foundation:

The capture of Manbij is a crucial victory… [which] proves that the SDF can be the ‘local capable forces’ the Americans are relying on to defeat ISIS.

Cahit Storm says at Kurdish Question that the successes and professionalism of the SDF (along with “the disastrous train and equip program for rebels funded by the US” in previous years) are now likely to “show US decision-makers that they have got the perfect blueprint for the Raqqa liberation”. [In late May, the SDF also began moving towards Raqqa – which Daesh has considered its capital city since 2014 – in response to requests for liberation from the city’s residents.]

Michael Stephens, director of the Royal United Services Institute (RUSI) in Qatar, also believes the Manbij Offensive demonstrated the USA’s “ongoing confidence” that the SDF is “the most capable actor in Syria” in the fight against Daesh. While Washington still hasn’t officially recognised Rojava, which is a strong reminder that its cooperation with the SDF is still only temporary, it may in the coming months open a representative Rojava office – presumably as a gesture acknowledging its key role in defeating Daesh.

In a nod to their friendship with Turkey, Western nations have largely failed to recognise the multi-ethnic, secular, and democratic revolution underway in Rojava and Northern Syria. A sign of this is the fact that they keep arresting people who have allegedly fought with the SDF or its PKK affiliates in Turkey. The reason for this hostility is that Ankara broke off peace talks with the PKK (Kurdistan Workers’ Party) in July 2015, and has been clamping down on dissent and attacking Kurdish communities in south-eastern Turkey ever since.

Turkey has now reiterated that it expects the SDF not to advance on other Daesh-controlled areas in northern Syria and to focus on Raqqa instead. With a new friendship blooming between Russia and Turkey, the US is likely to do all it can to appease the Turkish regime.

The only problem is that the SDF believes Daesh shouldn’t control any of the Turkish border. And on 14 August, it announced plans to emulate the Manbij Military Council (an army of local citizens it set up to lead the Manbij Offensive) in other parts of northern Syria. In particular, it created the al-Bab Military Council to focus on defeating Daesh in the city of al-Bab – the home of the jihadis’ foreign intelligence headquarters.

According to one SDF fighter:

We have to liberate all this part of northern Syria, everybody knows that Daesh gets all its weapons, volunteers from the Turkish border, and every week 100 jihadists cross the Turkish border, and Turkey is indirectly supporting Daesh… If we take al-Bab and Jarabulus… the border will be closed, and Daesh will be isolated from the rest of the world.

Jarabulus is the most important city on the Turkish border still under Daesh control, and jihadis in Manbij fled there after their defeat. Its loss, along with that of al-Bab, would deal a devastating blow to the gang, cutting off its lifeline to the outside world.

Victory in Manbij may just be the beginning. But it’s clearly a powerful omen of things to come.

– See more on Turkey and Rojava, and see this article’s recommended book.

– Ask Theresa May and your MP to officially recognise Rojava, delist the PKK, and push the Turkish regime to stop its war on Kurdish communities.

– Join at least 400,000 Brits who have cancelled their holidays in Turkey, and support the boycott campaign here. Also sign this petition aimed at preventing further state massacres in Kurdish communities.

– See other international articles from The Canary, and see this article from openDemocracy questioning the impartiality of RUSI.