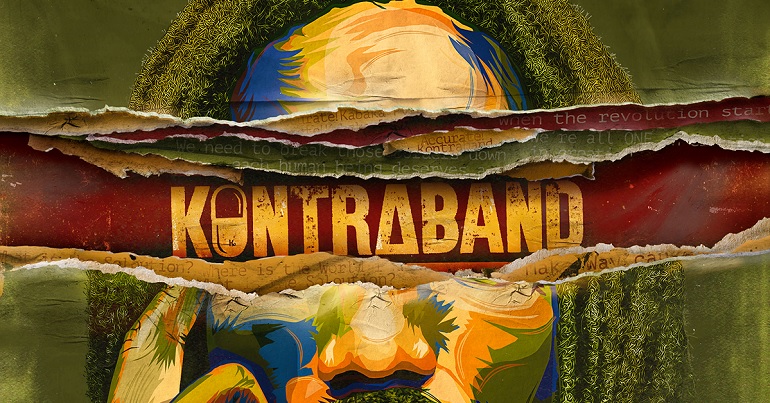 A conscious reggae artist’s debut album has already been making waves on the music scene, with one reviewer labelling it “a pending classic”. It has a potent mix of genres, and some of the most intelligent political and social commentary of recent years. But is this piece of musical ‘kontraband’ one of the albums of the decade? The Canary caught up with the artist for an exclusive interview to find out.

The ‘king’ has arrived

Kabaka Pyramid, whose birth name is Keron Salmon, hails from Kingston, Jamaica. As Billboard has described:

he started out making beats and singing reggae as Ini Kabaka and rapping as Ronny Pyramid. Around 2009, as his lyrics became more socially aware, he merged his rapper and reggae identities, delivering his songs in a hip-hop accented Jamaican sing-jay [vocals mixed with DJing spoken word] style. Accordingly, he chose the name Kabaka, a Ugandan designation for a king, and Pyramid, which he says signifies an ancient African representation of New Age thinking.

The album is a powerhouse of musical ingenuity. Moreover, Pyramid covers a multitude of subjects: from climate change to racism, to capitalism’s effect on women, via love, refugees and the colonial hangover that Africa lives with as a continent.

Music for the heart

Pyramid says the album’s title track Kontraband “delivers the true essence of what the album represents”. He says his music is “focused on smuggling the message of righteousness, justice and awareness”. And he told The Canary that music and the arts are seeing a resurgence as a force for political and social change, which:

I think is of utmost importance. People are programmed by what they take in and the more positive and instructive the programming the better. The ears take information directly to the heart before it is processed by the brain, so music is a most effective tool at altering one’s reality.

Kontraband (the album) delivers an ‘altering of one’s reality’ in droves. It is easily an instant classic; no “pending” (as Billboard put it) in sight.

The album is, in so many ways, reminiscent of Lauryn Hill’s multi-Grammy-award-winning debut, The Miseducation of Lauryn Hill. In the same way that Hill took musical genres and smashed them together in 1998, so Pyramid does two decades later.

He effortlessly glides between styles – from the modern Afrobeat/RnB sounds on Kaught Up (see Koomz and Ramz in the UK) to the old-school dancehall breaks of Reggae Music. Pyramid travels on this musical journey via brief stops at subtle Ibiza/Iberian chillout influences on Africans Arise and Natural Woman. He even ends up at a full-on, chart-friendly RnB collaboration, All I Need – an instantaneous hit if ever there was one. But the overriding leaning of Kontraband is clearly towards reggae and hip-hop.

But what Pyramid, like Hill, does so masterfully is to mix these different genres on each track; creating a sound that is quite unique in today’s music scene. Like Hill before him, he does all of this while delivering a plethora of deep political and social messages. And he does it as a highly dexterous rapper and vocalist.

An early influence for Pyramid was reportedly the rapper Canibus. This east-coast hip-hop sound is apparent throughout the album. For example, I’m Just a Man could have come straight out of the studio of Notorious B.I.G. with its hard beats, rousing drums and pointed breaks. These are coupled with various samples. Together, they all work in a repeated crescendo at the end of each verse and bridge into the chorus.

One of Kontraband‘s standout tracks is Blessed is the Man, featuring fellow Jamaican reggae artist Chronixx. It’s a eulogy to Ethiopia’s 225th and last emperor, and Rastafarian ‘Jah’ (God), Tafari Makonnen – who took the name Haile Selassie I when he became emperor in 1930.

Blessed is the Man is musically groundbreaking; as is its approach to the subject matter. Pyramid and Chronixx singjay, but their style echoes east-coast rappers in terms of the lyrical and rhythmic complexity. This – coupled with the hard, hip-hop beat and drums, and electronic sample-laced production – makes Blessed is the Man a piece of cutting-edge reggae/hip-hop synthesis.

The subject of Africa is something Pyramid returns to on Africans Arise. The track takes a more traditional Afrobeat style, but with distinct chillout vibes. Pyramid partners up with international star Akon for what is an upbeat, fresh tune. But Africans Arise smashes the listener with some deeply profound lyrics.

If you’re not an African child,

Crimes what they do to wi, wi have it pon file,

Missionaries al’ we don’t know what their mission is.

Few international artists want to talk about Africa. Fewer want to discuss the effects of untold years of Western colonialism. And fewer still confront the hangover the continent still has from this today. But Pyramid’s message for Africans is to “be strong, keep hope alive and be the eye in the storm”. As Pyramid told The Canary, he’s not sure how long it will take Africa to shake off the effects of colonialism:

It is hard to say how far Africa still has to go. But I think once the standard of living of the average African rises beyond a certain point, then the continent will flourish. For this, we will need Africa’s nations’ leaders to rule in a self-sufficient way without colonial stipulations and limitations on governance, trade, investments and so on…

My Time is another stand-out track. It shows Pyramid’s ability to cross the boundary between conscious music and a more mainstream sound. In what could easily be a summer banger, Pyramid talks about how he has had to “grind like a coffee bean” and “sweat off [his] shirt like a farmer in tha dirt” to make it this far. My Time acts as a call-out to others because, as Pyramid singjays, “everybody need a lickkle motivation”. It’s an infectious, reggae-pop piece that would be as comfortable in the UK Top 40 as it would in a Kingston dancehall.

This call-out for people to embrace themselves, and ultimately each other, is central to Pyramid’s message. A lot of the content on Kontraband deals with anti-capitalist themes, something that he’s dealt with in the past. There’s the call to Africans to “keep hope alive”, and Natural Woman‘s message of rejecting capitalist norms. Pyramid is musically and spiritually pushing back against the might of individualised globalisation. He told The Canary:

Human beings are evolving. We are becoming more individualised, whereas in the past it was more of a collective experience – families, races, tribes, nations. I think the selfishness inherent in capitalism is a result of that. Each one is taught to fend for themselves and work for what they want irrespective of others’ suffering. I see this as a necessary phase in our evolution towards becoming more spiritual beings. The collective ideas and laws of race/religions will be replaced with an individual connection to the Creator, and then we will truly connect with other human beings regardless of race, class or nation. True ‘Universal Brotherhood’. For that to happen we must first become true individuals, and unfortunately selfishness is a driving force for that change.

Kontraband has a lot of moments of light. One of Pyramid’s signature vocal tricks is scat, with his ‘skibbily bang-bangs’ and such appearing throughout Kontraband. It’s another layer to Pyramid’s already complex musical palette on the album, one which nods to African and jazz influences. But as a device, it’s used as more of a shout-out than a central part of a track. Meanwhile, Pyramid’s humour is a constant on Kontraband. The track Well Done shows this particularly well.

(I must congratulate you);

You done a wonderful job a tear down wi country, demolition man.

But the track has a serious undertone, as Pyramid notes:

A wah kind a plan

Which is to keep poverty and unemployment on the rise;

Corruption and not to mention the lies;

Elections a wen the tension arise.

So you buy wi Kentucky not to mention the fries;

Anything fi secure your votes,

And then you rob the people fi secure your boat.

Well Done could be applied to many countries around the world at present. But Pyramid believes the public is becoming wise to the anti-democratic nature of so-called democracies, and the accompanying corruption. And he thinks it can only be a good thing. He told The Canary:

People are waking up to the corruption; it’s more upfront, in our face. More and more major leaks have happened that show clearly the levels of corruption in politics and even sports. Before, it was something assumed but usually well concealed. This can be a result of an increase in technological capabilities, or a general global conscious awakening. What is for certain is that… it seems altruism and ideals are slowly creeping… in[to] today’s society.

It’s this positivity, despite the album’s often dark subject matter, which make Pyramid and Kontraband such important contributions to today’s music scene.

Take the album’s musical ingenuity. Couple it with Pyramid’s searing political and social messages. Mix those with his effortlessly sublime vocal skills. That leaves you with a combination of innovation and lyrical powerhousing that make Kontraband a groundbreaking piece of work. It makes it hard to overstate just how radical the album is. But as Pyramid says on Lyrics Deity:

Kontraband is filled with humour, integrity and perceptiveness. It packs a rare emotional and political punch that few artists are capable of delivering, all while setting a new bar for groundbreaking genre-crossing. Pyramid’s star is rightly ascending – with, as he would say, a skibbily-bang-bang.

– Find out more about Kabaka Pyramid and buy Kontraband.