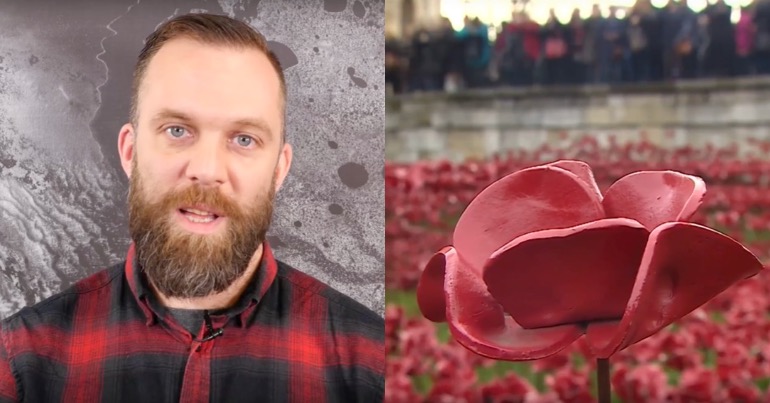 In an exclusive interview with The Canary, army veteran and defence journalist Joe Glenton doesn’t hold back. He criticises modern remembrance, the Royal British Legion (RBL), the UK military, and their many media and political talking heads.

Glenton wrote 2013 book Soldier Box: Why I won’t return to the war on terror. In it, he explained his decision to refuse a second tour of Afghanistan after suffering PTSD and disillusionment with the so-called “war on terror”.

Amid an often hostile and nationalistic atmosphere surrounding Remembrance Sunday, self-censorship happens a lot. But Glenton spoke to us plainly and irreverently.

He also argued that Labour’s commitments to veterans are the most impressive he’s seen to date.

Standing up for left-wing journalist Aaron Bastani recently, meanwhile, he challenged the stereotype that soldiers are right-wing:

Veterans have a role to play in left-wing politics.

It will have to be along class lines, involve economic demands and move beyond street theatre and virtue-signalling.

It will be as part of broader socialist movements.https://t.co/XvAaD6WZXN

Glenton’s detractors frequently try and dismiss him as a “deserter” and not a legitimate voice of veterans – even though he served in the military for five and a half years, including seven months in Afghanistan.

Addressing this claim, he insisted:

It’s because I refused to go on tour and then went AWOL [absent without official leave], so they say that I’m a deserter… But the actual charge was withdrawn by the army. Even the army didn’t think I am!

His reasons for going AWOL from an operational tour (one form of desertion) were striking:

I came back from AWOL voluntarily, and started legal proceedings. And my lawyer wrote this massive legal document – which was our skeleton argument throughout my defence – which was an indictment of the war on terror. Our argument was that I didn’t have to go because these wars were of a dubious legal and moral basis.

So why did they eventually drop the charges?

They went really quiet for about two weeks, and I phoned them up and they said ‘we’re going to drop all the charges for speaking to the media and desertion and downgrade it to being AWOL’. So basically, they rolled over to avoid public embarrassment and to avoid me using the trial as a platform to indict them. They don’t want some scumbag lance corporal indicting the whole army; it’s just not acceptable behaviour, is it?

But it’s Glenton’s critique of the current model of remembrance and the RBL’s performance that is most pertinent at present. Describing its “increasingly militarist tone”, he said:

the RBL essentially runs the state’s remembrance. And a large part of its work is doing marketing every year for the MOD, rebranding history to favour the establishment narrative and marketing British foreign policy – well, at least confusing and blurring foreign policy – and for which its top bods are paid hundreds of thousands of pounds a year.

They’re absolutely frank about this. It’s not something that’s hidden. They [military management] will organise which unit is going to parade in which town and what kind of events will go on.

But he didn’t dismiss the RBL’s work entirely:

I also acknowledge that part of their work is helping veterans and I’m sure they do. I have mixed reports from veterans; some say they’ve been helped, some say they haven’t, and nobody is denying that the RBL does do that. But it also has an ideological and political role that it plays.

Are other veterans as sceptical of the RBL?

Critics may claim that Glenton is just a minority voice on this issue, but he thinks otherwise:

You have to understand that the military, and military people, and veterans, are a closed world. The things that they would say to me they would not say publicly. But I can tell you: a lot, a majority… of the veterans I meet, I have some degree of criticism of the RBL and the proliferation of other charities that have appeared over the last few years.

And what are their grievances?

In terms of what they deliver, in terms of care, in terms of the role they carry out; the fact that they are very close – to the point of not being independent – to the government, and to arms firms. So quietly – because in the military you’re trained to keep everything in house – there is a lot of criticism.

There have been various scandals about facilities not being properly used and veterans not being able to use them. There is something grubby about it, I think.

The “really stark” class divide within the military

The problems with the RBL and other veterans’ charities, according to Glenton, is partly due to class. The current system of ‘veteran champions’, for example, includes:

people like Bear Grylls, Johnny Mercer, Prince Harry – people who were officers and have no understanding of what the actual needs of rank-and-file soldiers are

Class, he claimed, is “built in” to the military:

in a way that is really stark and kind of Victorian. You are either in the ranks or a senior non-commissioned officer (like middle management) or you’re an officer, who are normally graduates. The army is kind of a microcosm of British society in a way that is a lot more stark, and in which absolute power is held by some people over other people.

Glenton used Conservative MP Johnny Mercer to demonstrate his point about conservative upper-class officers not understanding the needs of the rank-and-file soldier:

I mean Johnny Mercer basically trades off (as many veterans do) the fact that he was in the military, and he used that to get elected. And his thing was all about [puts on a posh accent] ‘the boys’, ‘the blokes’ – ‘rugger boy Johnny’, as I call him. There’s so many guys like that in the army.

But how does Mercer perform as a champion for veterans in parliament?

He says lots of things, like his opening speech in parliament was ‘through hellfire we will support the veterans’, and since then I think he’s failed at every opportunity to. Like he voted down a public-sector pay rise that would have given serving soldiers more money. He voted it down. This is a man who’s positioned himself as the veterans’ champion.

What about Prince Harry?

I think Prince Harry is an even more dubious one in my opinion.

In particular, he is critical of Harry’s association with the Invictus Games, and the company he has kept there:

Two years ago, Prince Harry shook hands on stage with George W Bush. And this year, there was a really interesting piece going on in a publication called the New Matilda which looked at the profound connections – as most of the main sponsors are arms firms. So you can see the irony of the people involved.

The solution? Unionise the RBL.

Glenton’s solution may be regarded as radically political. But he insists that it’s important to understand the history of the RBL:

this is what is lost: the Royal British legion was founded as a merger of three veterans’ federations – kind of veterans’ trade unions – after the first world war… So it has these interesting roots; and a lot of these organisations were radical and left-wing.

And so there is a need to return to the past to help improve veterans’ circumstances today:

I would suggest that the RBL would be most useful today if it was turned back into a union. What veterans need is a union that can pressure and lobby, and in which they can organise like any other group of people.

What Glenton’s testimony shows is that, although hidden, dissent does exist among military and ex-military personnel regarding remembrance and its associated organisations. So calling any related criticism ‘disrespect for the troops’ is misleading.

It is completely possible and acceptable for the left to both oppose rampant militarism and champion the alleviation of veterans’ suffering at the same time.