Austerity Christmas: 'The cupboards are empty, the kids are hungry' - Canary 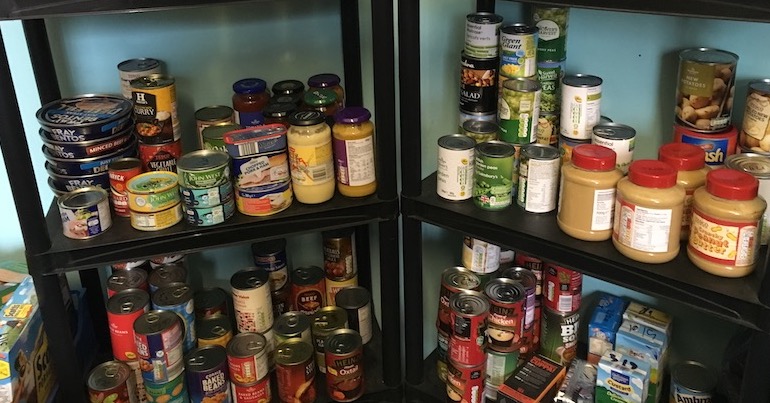 Donovan Gardener is chatting to Sarah* at the Camborne foodbank in Cornwall. He asks if she’s heard anything about her Universal Credit claim yet. She’s not sure, she says, because she couldn’t afford to pay her broadband or phone bill. He suggests that she also comes back next week when there’s a team of advisors to help. But for today, Sarah just needs food; because “the cupboards are empty,” she tells The Canary, and the “kids are hungry”.

We’ve got the tree up, we’ve got decorations, but if it weren’t for the kids there would be none of it. To be put in this position, well I probably shouldn’t say the words…

Sarah’s been “poorly for a long time” – so ill in fact that she thought it was better for her children to live with their dad for a while because she “wasn’t able to look after them physically or mentally”. After needing to use “crutches constantly for three and a half years”, she underwent major surgery earlier this year. Finally, her kids – aged eight and ten – are back home with her. But then, “the money struggles” hit. Because she was told she “couldn’t get Child Tax Credits now because my postcode is in the Universal Credit area”.

Sarah desperately tried to avoid “changing over to Universal Credit” because she’d heard of so many people facing problems with it. “I just thought,” she said, “no, no, we’ll get by”. She was claiming Employment Support Allowance, one of the benefits Universal Credit replaces, so there was no way of adjusting the amount once her kids came home. But then the bills kept mounting up. She was “robbing Peter to pay Paul” until “the phone bill didn’t get paid” and “the broadband didn’t get paid”. By then, as she explained:

We were really struggling. And that’s when I made the decision to change over to Universal Credit. I did that three weeks ago. And I wish I hadn’t. I really wish I hadn’t – especially on top of Christmas. But I wasn’t getting by anyway. Hopefully, when it does come, it will all come good but…

“Now, we’re left with nothing”

Three weeks on, Sarah says “now, we’re left with nothing”. She’s got a child benefit, “which is £34.40 a week”, and that’s it. She came to the foodbank two weeks ago, but didn’t come last week. “I don’t like asking for help,” she says, because “if somebody needs it more than me, I’d rather it goes to them”. Instead, she says she “begged and borrowed again”:

But now the cupboards are empty again. I was like ‘I can’t borrow any more because I can’t pay it back’.

She asks herself, “if I’d just held off till after Christmas, we just might have still scraped by”. But then she remembers that “we struggled for five months – I mean seriously struggled”.

Last time she visited the foodbank, she got a £49 fuel voucher. Gardener tells The Canary that he fundraised £3,998 pounds to pay for these in the summer. Because after ten years running the foodbank, he says:

I don’t think people understand the impact of fuel poverty, or what it is to have no power. You can’t boil a kettle. You can’t have a shower. Your life goes upside down.

Sarah explains that, without the fuel voucher, she’d have faced an impossible choice:

It would have been a choice between electric or food.

Sarah is stunned that the transfer to Universal Credit “stops everything to leave you with nothing”.

“That’s wrong,” she continues, because “all I want is to be able to look after the kids.” And despite their age, she says her kids are painfully aware of the situation. She explains that her eight-year-old daughter filmed “a video thing for Santa”. When Sarah watched it, halfway through her daughter said “I’d just like Mum to have some money so she’s not skint all the time”. Sarah says:

I thought ‘my kids know the word skint’. I was brought up with nothing, so I know what it’s like. But for my kids wanting me to have something so I’m not skint… She didn’t say ‘oh I want Mum to have some money so she can buy loads of presents for us’. She wanted something for me.

“All I want,” Sarah asserts, “is for them not to have to worry. Because they do. I just want them to be happy.” She says that she’s “emotionally exhausted”, but that she’s not giving in. Despite years of hardship and not being able to work – even though she desperately wants to – she needed to ask for “more help in this past month than I’ve ever had to”.

Yet in the face of everything, Sarah is overwhelmingly positive. “We’ll get there,” she says, “I don’t know how, but we will. We’ve got to.”