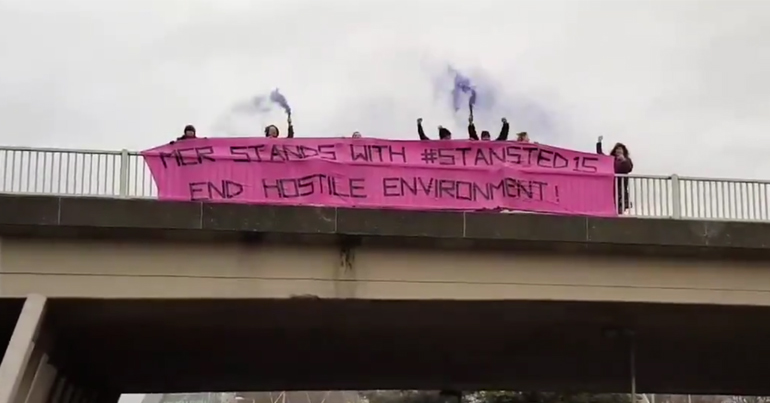 18 December is International Migrants Day. This UN-observed day has become a rallying point for grassroots support around the world. And in 2018, groups have launched demos across the UK to remember this year’s victims of the country’s hostile environment.

A network of groups, including End Deportations, Unis Resist Border Controls, and Lesbians and Gays Support the Migrants, called for a national day of action on 18 December. A press release seen by The Canary said:

demonstrations will take place in 18 UK cities​ to protest the hostile environment policy and the conviction of the Stansted 15 under terror-related charges.

The UK’s brutal border regime takes many forms. Deportation charter flights are one of the most harrowing. These planes forcibly remove people the government says shouldn’t be in the country. More than 12,000 people are deported from the UK every year, and charter flights are responsible for up to 2,000 of them.

On 10 December, 15 people were convicted under terror-related charges for taking action against a deportation flight. The ‘Stansted 15’ blockaded a plane taking 60 people to Nigeria, Ghana and Sierra Leone on 28 March 2017. The plane was rescheduled, but the delay led to 11 people on the first flight being given the right to remain.

One of these 11 said in the press release that:

For me a crime is doing something that is evil, shameful or just wrong – and it’s clear that it is the actions of the Home Office [which] tick all of these boxes – and the Stansted 15 were trying to stop the real crime being committed.

Demonstrations were planned in 18 cities across the UK. Many of these took the form of banner drops and began early in the day, including in Leeds:

Meanwhile, there were also unplanned actions, including a banner seen over the M32:

There were ‘subvertised’ ads on the London Underground:

We have hacked 100s of Tube ads across central London urging people to take action to stop deportations on commercial flights for #InternationalMigrantsDay pic.twitter.com/usxzR2DLG7

And support even came from someone who’d just received their citizenship:

Today, on #MigrantsDay, I became a British citizen. Today, I stand in gratitude and solidarity with the #Stansted15 and with all those existing across and against borders. #EndDeportations #NoOneIsIllegal pic.twitter.com/Sp6ffvfmn0

The struggle is for all of us

The Stansted 15 shone a spotlight onto one of the worst faces of the UK’s hostile environment. But immigration authorities also push other horrors.

There are detention centres such as Yarl’s Wood and Morton Hall, which are sometimes called “worse than” prisons. Schools, hospitals and homeless charities that should offer sanctuary become unapproachable because they share data with the Home Office. Employers also exploit people’s labour before calling Immigration Enforcement. And that’s not to mention the media’s hostility to folk who’ve come from other countries.

Fighting the UK’s destructive border policies must begin by putting the voices of those affected at the front. But today’s actions are also a reminder that the struggle ultimately belongs to us all.