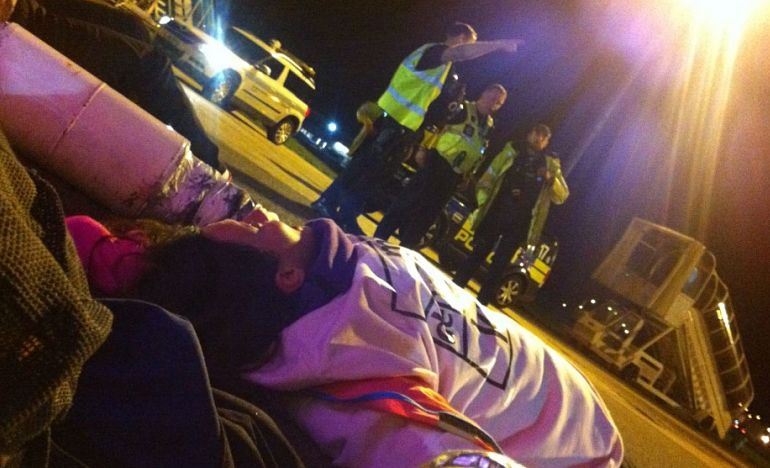 On 28 March, activists stopped a charter flight of enforced removals from taking off. They were labelled “heroes” by some. But the Home Office matched this sturdy determination with its own steely resolve. It quickly rescheduled the flight and sent refused asylum seekers held in immigration detention back to Nigeria and Ghana. The flight left on the evening of Thursday 30 March.

On Tuesday 28 March, 14 activists from End Deportations, Plane Stupid, and Lesbians and Gays Support the Migrants locked themselves to a tripod to stop the mass deportation flight from Stansted Airport to Nigeria and Ghana.

Activists and passengers on the flight said deportees feared for their life. One man from Ghana said he would commit suicide if he returned; while another woman said her husband was waiting for her in order to kill her.

One passenger due to fly on the chartered removal mission said this through anonymous platform Detained Voices:

From someone who was due to be on the #charterflight last night from #Stansted. Stop these inhumane deportations. https://t.co/YSY9iA8R1e pic.twitter.com/QY6MnjA1WQ

Stansted Airport closed that night at 10pm when activists hit the tarmac. But on Thursday evening, it happened all over again. And an urgent call on social media saw activists descend on the site to show their support for the deportees.

Tuesday’s plane blockade was an unprecedented victory. For the first time in the UK, the brave and determined actions of campaigners grounded a charter flight and prevented the deportation of dozens. It showed a glimpse of what’s possible through collective action: when we fight we can win.

That the Home Office would rush to try and undo that victory is no surprise. Last night (Thursday) they chartered another flight to deport people who had been due to be removed on Tuesday. But every person who was forcibly taken to Nigeria and Ghana last night knows that there are people in the U.K. who will fight for them by any means necessary.

We have been humbled and energised by the messages of support, thanks and encouragement from people who were meant to be on Tuesday’s flight, their loved ones, and people everywhere who want justice. To the thousands inspired by the action on Tuesday night: Join the movement. Join the fight. Join the resistance.

We will stay in touch with those deported, and with people still and formerly in UK detention, to support those who have led the resistance to mass and individual deportations for years. Together, we will fight until we win.

The Home Office regularly deports and removes people in immigration detention by chartered flight. It often happens at short notice, and those involved are unable to say goodbye to loved ones or to collect their belongings.

Between April 2015 and March 2016, 2,811 enforced removals took place. Campaigners say that, last year, around 1,500 removals took place in total. And according to a Freedom of Information request, the following charter flights have already taken place in 2017:

In addition to the 30 March flight to Ghana and Nigeria, End Deportations told The Canary that one flight also took place on 21 March to Pakistan.

Activists may be aware that their actions have a limited success rate. But at the very least, they are helping to raise awareness of the drastic measures and effects of pursuing a ruthless immigration policy.