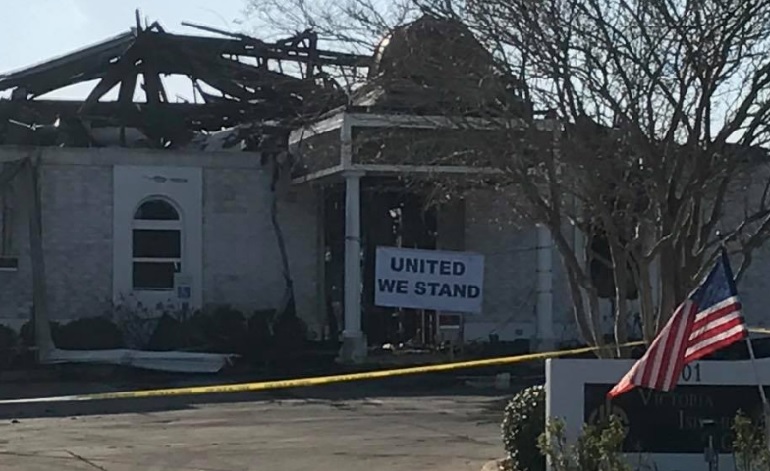 In recent years, and particularly since the election of President Donald Trump, the US has seen a rise in hate crimes against religious and ethnic minority groups. But people from different faith groups are now coming together more and more to replace stories of hate with stories of hope. And one of those stories in particular is among the most moving things you’ll see all week.

On 27 March, a 28-year-old white American was charged for acts of terrorism after fatally stabbing a 66-year-old black man in New York City. In February, meanwhile, another white man allegedly shot two Indian engineers (killing one of them) after telling them to “get out of my country”. In the wake of these attacks, Mic‘s Zak Cheney Rice insists “we need to talk about white American terrorism”. The reason, he says, is that recent years have seen a significant boost in “attacks against Muslims, immigrants and people perceived as Muslims or immigrants“. He also points out that:

President Donald Trump and his supporters have made an aggressive display of painting Muslims — especially immigrants and refugees — as the greatest national security threat facing Americans today. But as domestic attacks continue, their refusal to acknowledge the much older and more costly threat of white terrorism highlights their hypocrisy.

So far this year, there have been around 35 attacks on mosques in the US. And despite the increase in anti-mosque attacks and anti-Muslim hate crimes, the Trump Administration has failed to speak out. For Corey Saylor of the Council on American-Islamic Relations, condemnation is key to reducing the number of such incidents; especially given that Trump’s name has appeared on graffiti on mosques and in letters sent to Islamic centers across the US. One such note received by a mosque in Iowa on 19 March read:

There’s a new sheriff in town—President Donald Trump. He’s going to cleanse America and make it shine again… He’s going to do to you Muslims what Hitler did to the Jews.

That’s why Zac Cheney Rice has spoken out:

Stories of hope and unity

But amid all the stories of hatred in the US, people from different faiths are standing up. Together.

On 27 March, NorthJersey.com wrote about how:

Muslims and Jews are forging new bonds to support one another and protest bigotry. They have prayed together, joined in anti-hate rallies and raised money to help each other repair vandalism to mosques or synagogues. And they are taking time to learn each other’s faiths so they can understand and, if needed, defend each other.

The head of one mosque, Imam Moutaz Charaf, said that local rabbis and synagogue members had called him to offer their support. And he insisted:

I was touched by emotion, love and feeling they had toward us, really… I definitely feel we are not alone and we have many friends.

The Chicago Tribute, meanwhile, has written about how Muslim and Jewish leaders were forging new alliances such as the ‘Sisterhood of Salaam Shalom’ – an organisation where Jewish and Muslim women meet regularly in art galleries, libraries or members’ houses. And The Boston Globe has reported on how rabbis are even inviting mosque leaders to their gatherings.

At the same time, the presidents of the Muslim Public Affairs Council and Jewish advocacy group J Street wrote a joint article recently at The Huffington Post. They stressed:

we know that we can and must work together to achieve security, justice, and mutual respect. We will resist the scapegoating of our communities and faiths, and fight anti-immigration legislation that goes against both of our histories.

One of the most moving stories so far

Perhaps one of the most moving cases of inter-faith solidarity, however, came earlier in the year.

In late January, anonymous arsonists burned down a mosque in Texas. The fire came only hours after Donald Trump announced his controversial Muslim ban.

But sympathetic citizens quickly stepped in to show their support.

People of different faiths and no faith raised over $1m to rebuild the mosque. And members of a local synagogue even gave their keys to the Muslim community. At least four churches also offered Muslims a space to hold their services.

One of the most moving acts, though, was when children from a local Catholic school visited the destroyed mosque and formed a “human chain of love and peace”. The pupils also presented the Muslim community with a tree. The Islamic centre responded by saying:

This is the spirit of love where the cross hugs the crescent.

One teacher from the high school said:

They are literally our neighbors… We are responding to the call, ‘Love thy neighbor.’

And in a time of divisive rhetoric and increasing hate crime figures in the US, that message of love, unity and solidarity is more important than ever before.

– Read our previous story about Muslims uniting to raise funds to restore the damage after an antisemitic hate crime in February.