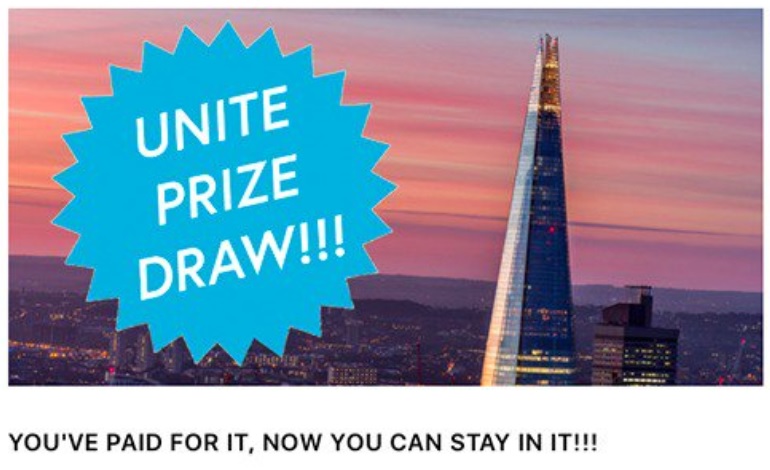 The Labour Party’s biggest backer Unite union is electing a new leader. And the two main rivals, Len McCluskey and Gerard Coyne, are fighting campaigns to get that top spot. But on 1 April Coyne launched a seriously low blow April fools joke at his competitor.

Win a weekend in a luxury London flat: pic.twitter.com/cG9shfRSUE

Unite is Britain’s biggest union with 1.42 million members in every type of workplace. This includes the automotive industry, energy sector and construction. The union supports workers, pledging to help them secure good jobs, better pay and conditions, as well as a stronger voice. But the recent bitter election campaign has split the camp in two. Both McCluskey and Coyne have got their guns blazing in a bid to win the title.

At present McCluskey is leading the race, having secured six times as many branch nominations.

McCluskey is the former leader of the union, while Coyne is the current West Midlands Secretary. Coyne’s supporters, and associations, are generally hostile to Labour leader Jeremy Corbyn. While McCluskey is a vocal supporter of Corbyn. This has been the backbone of Coyne’s leadership campaign:

In February, McCluskey accused Coyne of ‘peddling smears’ rather than fighting on the issues that matter. Deputy Labour leader Tom Watson has also been accused of interfering with the fight and being behind a “dirty tricks” campaign to oust McCluskey in favour of Coyne.

So as the civil war rages between the two, Coyne has used April Fool Day’s for a cheap blow at his rival. He posted this on Twitter at 10:33am:

Win a weekend in a luxury London flat: pic.twitter.com/cG9shfRSUE

The tweet shows an ’email’ from McCluskey to members of the union. It promotes a competition to win a weekend break in McCluskey’s “luxury london flat”. 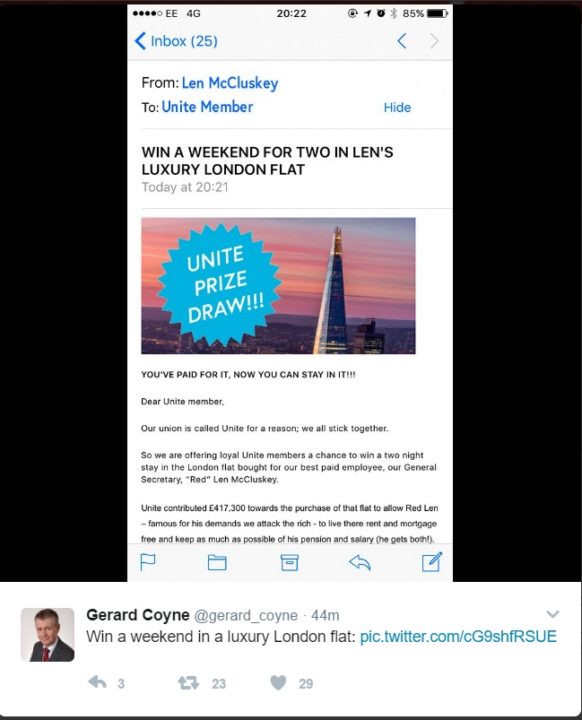 The email also states: “Unite contributed £417,300 towards the purchase of that flat to allow Red Len – famous for his demands we attack the rich – to live there rent and mortgage free…” 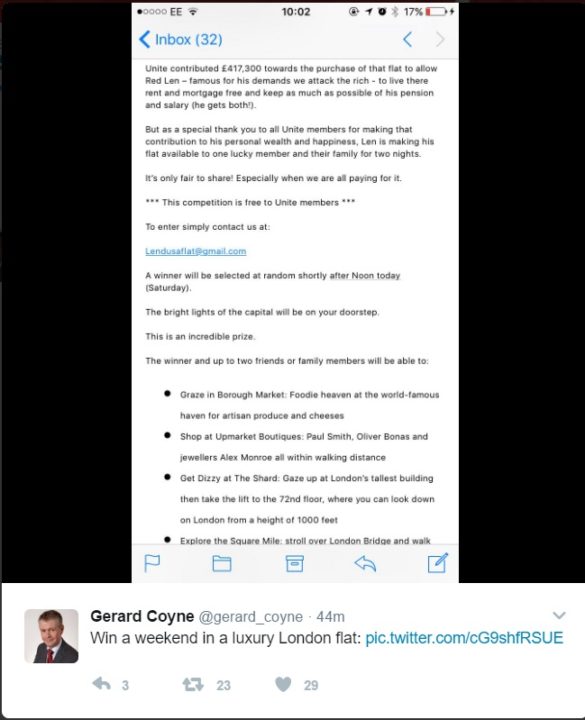 After listing a variety of activities you could do in London, it states: “(NB: Len isn’t supplying you with any spending money, so you have to pay for all of the above yourself. You can’t really expect him to be that generous, surely?)” 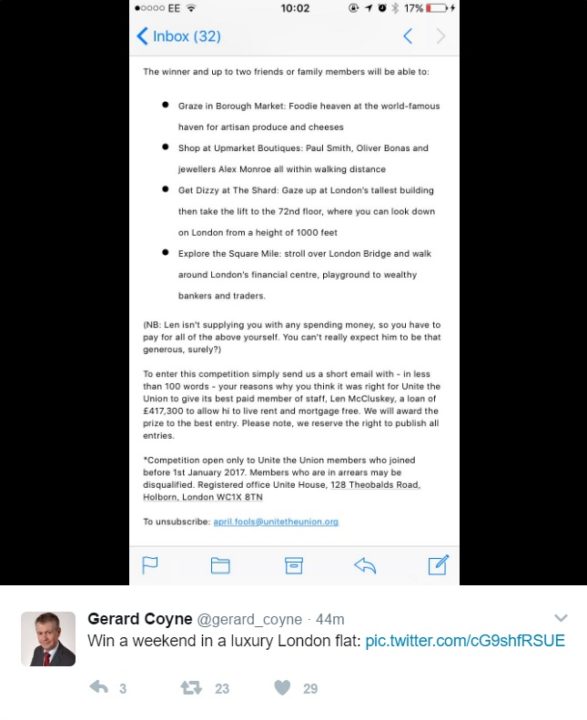 The email appears to be referencing the flat McCluskey purchased in February 2016. Unite contributed £417,000 towards the purchase of his £695,500 home. Some thought there would be “much disquiet” over the arrangement. Yet the union argued the agreement was not a loan but an equity share arrangement which would raise more money for its members when the property was sold.

Regardless of the context, Coyne’s April Fool’s joke didn’t appear to go down well with his Twitter followers:

desperation written all over this

With the election campaign seemingly taking a turn for the worst, union members may be pleased it is almost over. Unite members have until 19 April to vote. The result will be announced on 28 April. And it will surely be a tense time for the Labour Party, who relies on the support of this union.

—Find out more about Unite’s leadership campaign on The Canary