First Nicola Sturgeon sent an up yours to the Tories. Now the people of Scotland have done the same - Canary 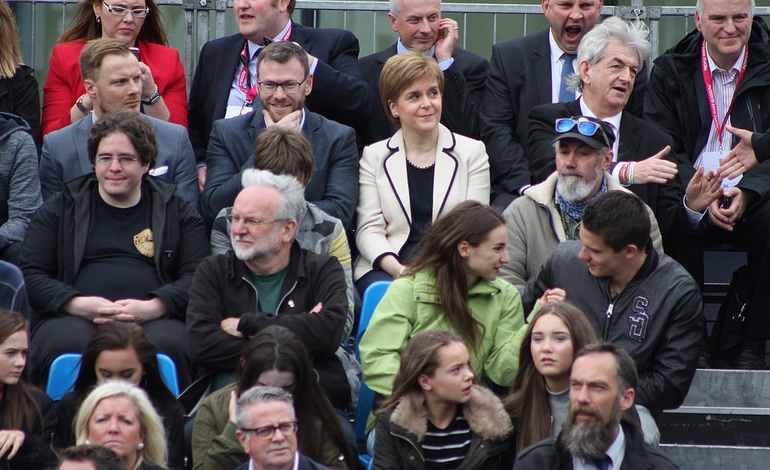 The people of Scotland have sent the Tories a message. And they did so on the very same day their First Minister Nicola Sturgeon sent Prime Minister Theresa May a letter, marking the start of talks on a second independence referendum.

The Conservative government will not welcome the message sent from Scottish citizens. Because it destroys their main argument against holding that referendum. But if they ignore this clear signal, it will not go down well.

May: People in Scotland don’t want another referendum

Sturgeon confirmed another referendum was on the cards earlier this month. Since then, the UK government has argued against it, claiming people in Scotland don’t want another one. But the latest poll by Survation suggests that is fundamentally untrue.

That’s an overwhelming majority of people who think the referendum should rest with Holyrood. And this week, MSPs in Holyrood voted 69 to 59 to seek permission for a referendum from the Prime Minister.

So if Westminster gave Holyrood that right, it would almost certainly approve the referendum itself.

May: But together we are an unstoppable force

More recently, May has argued that Scotland shouldn’t hold the referendum because the UK is an “unstoppable force”. She claims that, when the four nations of the UK – England, Scotland, Wales and Northern Ireland – work together, “there is no limit to what we can do”.

Yet Sturgeon’s letter to the Prime Minister details a different dynamic at play in the UK. Scotland’s First Minister writes:

I expressed my frustration on Monday that the process leading up to the invoking of Article 50 had failed to involve the devolved administrations in any meaningful way – a view that I know is shared by the First Minister of Wales.

Sturgeon claims that Westminster “largely ignored” the devolved administrations in those pre-Article 50 deliberations. Furthermore, she says that “all attempts at compromise [were] rejected”.

So both of May’s major arguments against an independence referendum are suspect. And from the above survey, it seems there is a real appetite in Scotland for a referendum. Or, at least, for giving the Scottish parliament the authority to decide whether it goes ahead or not.

When May thought the opposite was true – that Scottish people didn’t want a referendum, she regularly fought for their corner. Now things have turned around, we’ll see whether May is so intent on propping up the will of the people.