As deaths occur and coronavirus cases start to rise in British prisons, campaigners express their concerns - The Canary 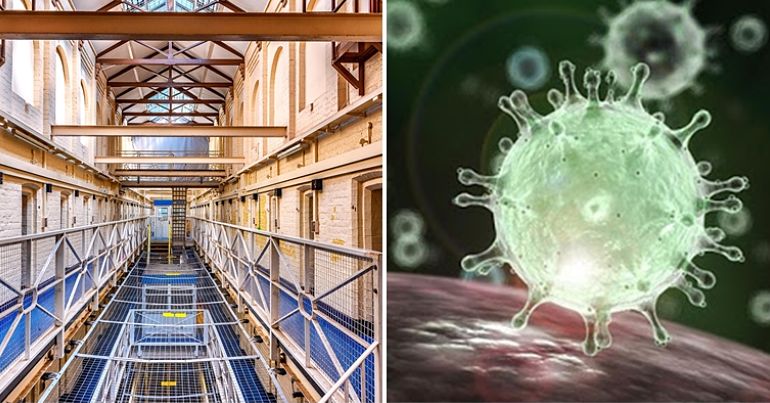 As British prisons experienced their first deaths from coronavirus (Covid-19), justice campaigners have warned this might just be the beginning. A former prison officer and justice campaigners speak exclusively to The Canary about conditions on the inside. They say prisons are in urgent need of change, especially in the midst of this pandemic.

One of these campaigners told The Canary she’s annoyed with the Ministry of Justice (MoJ):

This has been going on for months. They’ve known about this for months…nothing’s been put in place for anybody who’s in prison at the moment

If their worst fears come to pass, these early deaths inside a prison are an indication the pandemic on the inside could get completely out of hand. This is concerning for people living inside prisons and for their loved ones – including justice campaigners for the wrongly convicted – as well as for prison staff and their families.

On 24 March, the Ministry of Justice (MoJ) cancelled all visits to prisons in England and Wales. It did so in response to the coronavirus pandemic to ensure the “safe and secure functioning of our prisons while enforcing social distancing”. And in terms of prisoner and staff safety, the campaigners who spoke to The Canary support this move.

Contact between people living inside prisons and those on the outside is now limited. Certain people inside 55 jails must now rely upon secure phone handsets to communicate with the outside. Others will receive more phone credit.

According to Joint Enterprise Not Guilty by Association (JENGbA) campaigner Jan Cunliffe, since the announcement to cancel family visits, people living inside prisons are on a “23-hour lockdown”. So they must stay in their cells for 23 hours a day. As a result, they have just one hour to exercise and to use facilities such as payphones and showers.

But as the campaigners told The Canary, the practice of social distancing – keeping at least two metres away from other people to prevent the spread of the virus – is nigh on impossible in this environment.

Gloria Morrison is also a campaigner with JENGbA. It is “campaigning to reform legal abuse by joint enterprise”. Joint enterprise is a common law principle that can result in a person being convicted of a crime they had some link to but did not commit themselves. It’s a controversial principle, and a large number of the people convicted are young Black men.

In January 2016, the Centre for Crime and Justice Studies (CCJS) carried out research. It found that of a survey of 250 people convicted using joint enterprise, more than half were from Black and minority ethnic (BAME) backgrounds.

It was used in March 2009 to convict two Irish republicans. Brendan McConville and John Paul Wootton – known as the Craigavon Two – were convicted of the murder of PSNI constable Stephen Carroll in the north of Ireland. Both of these men remain in prison today and campaigners on their behalf maintain it’s a miscarriage of justice.

Concerns for their children

Morrison said her “son” is in prison for murder under joint enterprise. He’s still in prison and he has sarcoidosis. This disease is caused by inflammation and commonly occurs in the lungs and lymph nodes. He’s in a cell with another prisoner so neither can self-isolate.

Morrison says she believes prison officers are doing their best but prisons must “release prisoners on compassionate grounds”. Her son’s parole hearing was to take place in February, but that probably won’t happen now until August.

Cunliffe says she’s not getting much information from the prisons. Instead, she mainly keeps up to date by phone calls from people inside or “from looking on Twitter” to see what the MoJ has posted. And while she did find out about the cancellation of prison visits by phone she was already aware of it through the media. She feels frustrated by this and the way society views people inside:

Since 24 March, people living inside prisons have been on lockdown and are confined to their cells for 23 hours per day. Cunliffe says she agrees with the lockdown to protect their physical safety but worries about people’s mental health under such conditions. They can’t take physical exercise as normal. She says it’s an “almost an impossible situation” because “new regimes should have been put in place months ago”.

According to Cunliffe, people on the inside don’t get the regular media updates that people on the outside get. So the lack of information could be terrifying for them.

She worries too about the day-to-day difference because it’s difficult to stay hygienic in a small, shared prison cell. Access to soap and clean towels could also be limited. In some prisons, according to Cunliffe, prison staff told the men they can only go to the shower and to use the phones in twos. But in a large prison, she wonders if there are “enough hours in the day to do this?”

And the 900 mobile phones shared between them is a small number for around 92,400 people inside UK prisons. And while insufficient, there are, according to former prison officer Joe Chapman, a number of “illicit phones” within UK prisons. Cunliffe warned that under these conditions of lockdown, prison authorities will need to “think outside the box” to ensure there are no riots.

Cunliffe’s son Jordan was due for his parole hearing on 25 March, but under current conditions this has now been postponed. He’s “at risk because of severe illness” because of surgery a few years ago. As a result, he should be isolated. Yet instead he has to take massive precautions. But again, under these conditions, that might prove impossible.

A Parole Board spokesperson said:

Unfortunately, it is no longer possible for the Parole Board to proceed with planned face-to-face hearings since new measures have been announced across the prison service. We are conscious of the need for hearings to continue to be scheduled and for us to look at alternative ways of hearing cases, wherever possible, remotely.

Based on his experience inside, John Crilly doesn’t believe prisons have the facilities to deal with what’s happening. And while he believes people will comply with new regulations they see as “a necessary evil”, he believes more deaths will follow.

Crilly believes there’ll inevitably be ‘frustration and tension’ inside as a result of the lock downs. He claims he experienced something similar during his time inside which he says “was horrendous”.

Now working as a prisons consultant, former prison officer Joe Chapman paints quite a bleak picture. He says staying hygienic as required to defeat this virus, and social distancing, is “pretty impossible” inside. However, he said this could vary from prison to prison as “some are very well run, some are not so well run”.

Some prisons have wide-open spaces where social distancing is possible but others don’t. And for those that don’t in an ‘8×11 two-man cell’, social distancing and hygiene can prove very difficult. Chapman also fears there’ll be “many more deaths” in prisons. And he’s not entirely sure what they can do to prevent that from happening.

Prison officers don’t always have protective clothing on them, which exposes them and their families to risk. This of course cuts both ways as the virus can enter the prison given that people live and work in close proximity.

The Canary contacted the Prison Service. Its spokesperson said:

We have robust contingency plans in place based on the latest advice from Public Health England, and can deploy staff flexibly to prioritise the safety of officers, prisoners and visitors. Regimes are currently restricted which is helping to reduce the impact of reduced staffing levels at the present time.

We are prioritising the safety of staff, prisoners and visitors, and have the ability to deploy staff flexibly, including staff from HQ back to the frontline. We are in the process of redeploying around 500 HMPPS staff from non-critical roles to the frontline.

In line with broader clinical advice, HMPPS has introduced a procedure for the protective isolation of individuals in prison custody when it is considered that they may be potentially infected with the virus.

Basic hygiene is a key part of tackling Coronavirus. Handwashing facilities are available in all prisons and we have worked closely with suppliers to ensure adequate supply of soap and cleaning materials.

Prison staff will have only the minimum necessary contact with people who are isolating and will be provided with appropriate personal protective equipment.

Prison transfers are being minimised, staff are given PPE and vehicles deep cleaned. They remain necessary for a number of reasons, but all precautions are taken in line with PHE advice.

It posted further information of these guidelines online.

“We will get through it together”

While Boris Johnson claims the UK will get through this and “beat this virus”, the same feeling of certainty doesn’t appear to be felt inside prisons. If we are all indeed in this together, there can be no exceptions. It includes our prison population and the people who work there too.

But even if thoughts of human compassion don’t concern some people, then the practical and medical implications should. This virus has already demonstrated how quickly it can spread. It’s not just the immediate prison population that’s at risk. Prison staff live in our communities. So if we really are all in this together, we need to protect all communities equally.