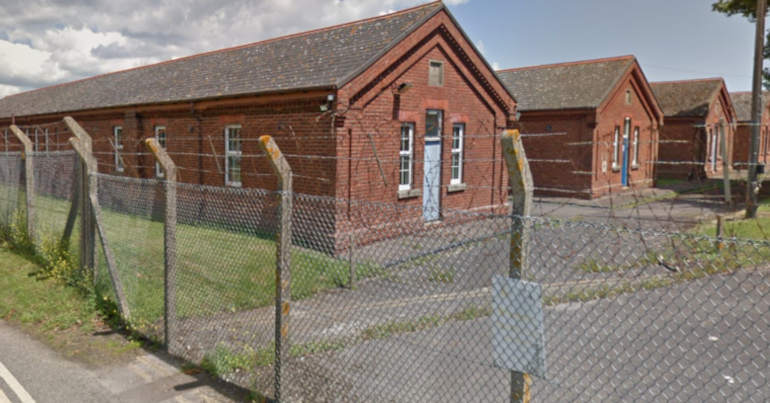 Refugees are still being housed at a disused army barracks near Tenby, despite repeated complaints that the accommodation is not suitable.

The Home Office has stated its intention to move people out of the Penally barracks. But residents say it’s not happening fast enough. Residents told The Canary that only 11 people have been moved out of the barracks, and 5 more will leave later this week since the Home Office announcement in January, and that around 100 people remain there in appalling conditions.

Saif (not his real name), who has been kept at Penally since September 2020, said:

The way they are moving people is too slow, last week they moved around 5 people. Its not enough, its really a small number.

I have been here since the end of September, and that’s too long.

The situation is getting worse. To live here during the winter is not easy because it’s an old military camp. The conditions are not correct to keep people here in winter. Its really really bad.

Over the past months, The Canary has reported that the barracks have insufficient toilet facilities for the number of people housed there and that refugees are cramped into shared rooms, and have to go outside in the cold to go to the toilet. Only communal showers are available, and there is no nurse, doctor or counsellor available on site. Residents have complained several times about insufficient and poorly cooked food.

There is also no way that the residents can effectively protect themselves from coronavirus (Covid-19) at the barracks.

These conditions have not improved. According to Saif:

We don’t have a nurse or a doctor here, and there are some people here who wait 1-2 weeks before [going out of the barracks to see] the doctor. There’s no-one that helps with people’s mental health That’s really bad.

You don’t have anything to do – no education, no nothing and the food has not improved.

If you ask people here how they are, they always say that they are very depressed.

Clearsprings staff “need to understand” us

Saif said that the staff at Penally, who are provided by an Essex based private company called Clearsprings, sometimes treat the residents badly. He said:

Sometimes the guards are rude, I have seen people having problems with them. They need to understand the people here. Many people here have had a really hard life before they came. And its really hard for people to come here, where you have to share everything with others. So the Clearsprings staff need to understand the residents. And sometimes the staff – some not all – are really bad

We asked Melik, another resident of Penally, whether there had been any developments at Penally in the past weeks. Melik (not his real name) replied:

The only development is that the Home Office started relocating residents to other initial accommodation at a slow pace – this week they will move 5.

CRoP [Camp Residents of Penally] with support from Forrest MLS and Helen Bamber Foundation are still working on medical assessments to prove how vulnerable the residents are, how inappropriate the accommodation, especially bearing in mind Covid 19.

The Canary contacted the Home Office and Clearsprings Group to ask them to respond to the residents concerns. We had not received a reply by the time of publication.

Melik also expressed frustration at some of the solicitors representing the residents:

The frustration and depression is still the same because many solicitors aren’t working efficiently and effectively with asylum seekers, the moment the asylum seekers signed the Legal Aid Agency form we don’t hear back and our file is kept in the drawer.

“Not an appropriate place”

Melik concluded by calling for solidarity from outside Penally. And demanding that residents be given accommodation that enables them to protect themselves from coronavirus. He said:

Asylum Seekers want the British community to continue standing and supporting us, as they have been doing through solidarity words and actions. We are frightened that there have now been more than 100,000 deaths because of Covid 19 [in the UK].

Concerns about the spread of coronavirus have been amplified by an outbreak of the virus at Napier Barracks, the Home Office’s other military camp for refugees. According to Melik:

Hopefully, things will be alright and we believe in working together against this virus by supporting the NHS, and staying at home, wearing a mask and keeping the two-meter social distancing. But please get us out of these barracks because it’s not an appropriate place to accommodate us in such unpleasant times.