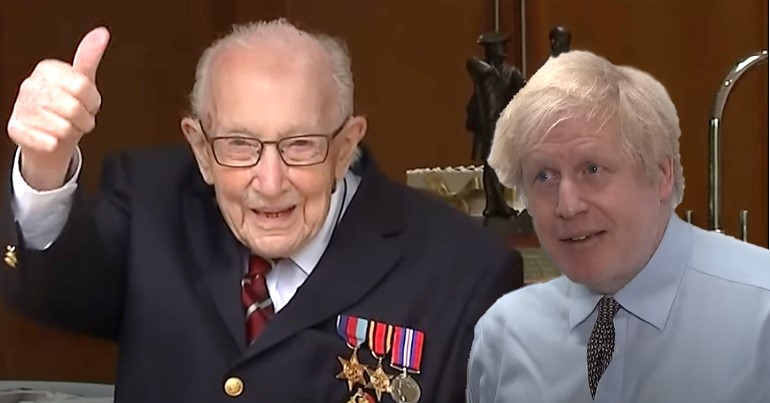 Captain Tom Moore sadly died on Tuesday 2 February. And now, Boris Johnson and his government will be leading a national ‘clap‘ for the veteran and fundraiser. There’s a sickening hypocrisy infesting the Tories. And it represents the most twisted moment of the week so far.

The 100-year-old [Moore], who raised almost £33m for NHS charities by walking laps of his garden, died with coronavirus in Bedford Hospital on Tuesday.

Captain Tom caught the national mood last year. Many hailed his resolve to help others in the face of adversity as inspirational. So, it is right and understandable that many members of the public would want to honour his death. But, as out of touch as is expected, enter Johnson to besmirch Captain Tom’s legacy.

BBC News reported that the PM was ‘encouraging’ the public to go outside at 6pm on Wednesday 3 February and clap for Captain Tom. It noted that:

Mr Johnson said the clap would also be for “all those health workers for whom he raised money”.

‘Sorry, what?’ sums up the general reaction from some people on Twitter.

Brendan May has this to say of the Tories:

It’s amazing watching people who have to be shamed into feeding hungry school kids extolling the values of a man who felt duty bound to raise money to help the health service they underfund. #CaptainSirTomMoore #ClapForTom #NHS

StarPower summed up some of the issues well:

Tories clapping for Tom makes me sick. The man raised money for an underfunded NHS and died from a Virus the Tories failed to manage. Instead of clapping, insist these vultures send the 350 million per week to the NHS that they promised. R.I.P Tom.#ClapForTom pic.twitter.com/BA5yYCgIVY

And Clifford K tweeted about the state of our government more broadly:

A Premier League footballer shouldn't be feeding your kids

If you want change, never vote for these #ToryScum again

R.I.P Sir Tom Moore and thank you, so very much pic.twitter.com/qiwx5BAkhO

But rapper and activist Lowkey perhaps hit the nail on the head best:

All coverage of Tom Moore's death should explain why a person a century old would feel the need to raise money for the NHS in the first place.

That shouldn't be normalised.

At points during the coronavirus (Covid-19) pandemic, the Tories have used behavioural science to try and mould the public’s actions. The Conversation noted that:

According to the principles of behavioural science, people don’t act rationally. But if we can understand people’s actions, and how they act irrationally, then we can intervene to change behaviour. Such interventions are typically called “nudges”.

Some example nudges in response to the novel coronavirus include singing happy birthday while washing your hands or using funny alternative “handshakes”. These strategies emphasise the need for good hygiene, and create memorable rules of thumb which encourage people to participate.

The Tories co-opting of the “Clap for Carers” was possibly another example of this.

By trying to create a feeling of national unity at a time of crisis, the government could have been trying to foster a notion of us ‘all being in this together’. That way, we would all think that we were collectively responsible for how the UK dealt with the pandemic. And so, by default, the Tories absolved themselves of some responsibility – when in fact, the blame for the UK’s catastrophically high death rate lies firmly at their doors.

It also normalised the NHS being under strain – but holding up and doing its best regardless. As Lowkey alluded to, these actions attempt to push us to believe that somehow successive governments’ chronic underfunding of the health service is a separate issue to its coronavirus response.

We’re witnessing the same with ‘Clap for Tom’. By endorsing it, the Tories are trying to push the idea that NHS funding is no longer solely its responsibility – that we all have to dig deep into our own pockets and get charities to prop it up. This twisted and mendacious agenda is nothing short of cynical. And it is disrespectful to Captain Tom’s legacy.

So, by all means clap to honour him. But make sure it’s under no illusions. It’s the Tories’ fault that a 100-year-old man had to walk up and down his garden for NHS charities in the first place. And any of them clapping is a disgrace.