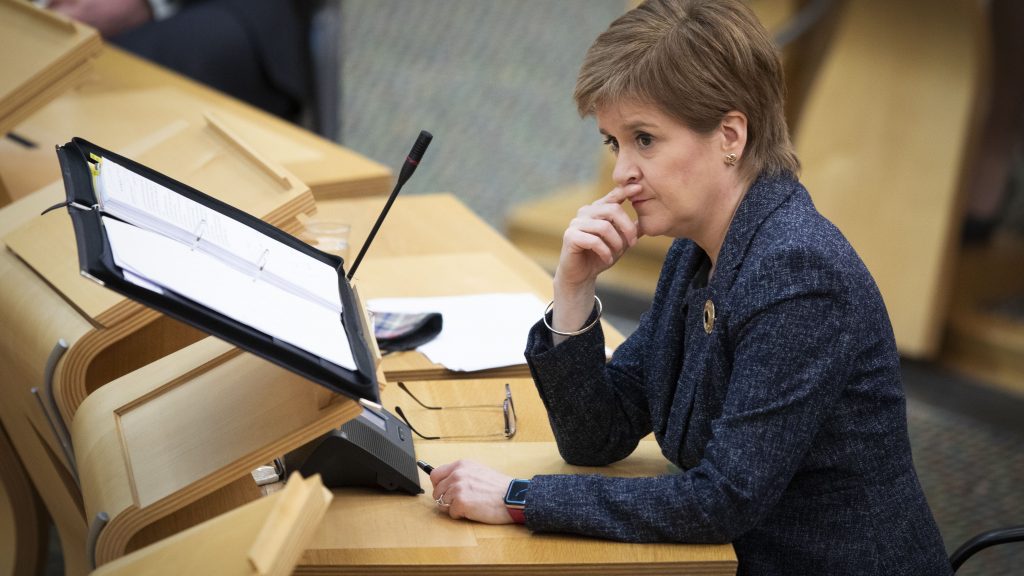 Nicola Sturgeon has labelled arguments that Brexit has brought a benefit to the UK procuring more coronavirus vaccines as “over-simplistic”.

During an interview on Good Morning Britain, Scotland’s first minister was asked about comments made by SNP MP Dr Philippa Whitford last July when she said the UK Government should be working with EU partners to find a vaccine. Interviewer Susanna Reid suggested the UK now managing to get vaccines because it is not part of the EU vaccination programme “must be one of the most powerful arguments for Brexit”.

I think there’s a bigger point but I’m not going to sit here and say anything other than I think it’s really good that the UK has managed to procure as much vaccine and that the UK as a whole is getting ahead in terms of vaccine.

We all have an interest in seeing all countries get the populations vaccinated because this is a global pandemic but I think the UK is in a very strong position. That the vaccination procurement and the approval of the vaccines started while the UK was still in the EU transition period, the rules around the European Medicines Agency would have allowed that to happen anyway.

Of course you can make that argument but sometimes I think it’s a slightly over-simplistic argument, but we should all be pleased that the vaccination programme is going so well. The issues around Brexit are much wider and more fundamental but even on this narrow point I think if you were to apply really detailed scrutiny it wouldn’t be quite that simple.

The UK, even if it had still been in the EU under the rules of medicines approval would still have been able to take decisions around vaccines as it has done. But it’s thoroughly a good thing that the UK has got such good supplies. Obviously all of us want to make sure those supplies keep flowing.

The UK Government procures on a four nations basis – that is something we voluntarily signed into – but it’s a good thing, and we should be pleased about it.

Why is Scotland looking at opening schools on 22nd Feb when Boris Johnson has said they won’t open in England before 8th Mar?@NicolaSturgeon says it is a ‘very gradual’ approach with the youngest students first.

Sturgeon also maintained Scotland’s vaccination rate had sped up this week and is being done proportionately “at a higher rate than England”.

When asked if she would change the date of school pupils returning in Scotland if it does not meet its target of vaccinating all over-70s by 15 February, she said it was “a hypothetical question but we’re on track to meet that target”.

Despite the current lockdown being extended until at least the end of the month, it is hoped P1-P3 pupils will return from 22 February along with nurseries, while senior high school pupils could also return to classes part-time “on a very limited basis” to do practical work necessary for their courses.

Many teachers will be vaccinated in (the JCVI) priority list because of age or probably more likely because of underlying health conditions but the reason they have recommended that list is that these are the people most clinically vulnerable. There’s also the fact that we don’t yet know the impact of the vaccine, although the early indications are good on transmission, so it’s not the case that just because we vaccinate teachers that would take away transmission possibilities in schools.

That’s why we’ve got to have other mitigations in place – I think Scotland was first to bring in a requirement for face coverings, particularly in senior schools.

So there’s lots of work to make schools as safe as possible but we know the damage that has been done to young people by being out of school, so as far as we can… safety cannot be compromised.