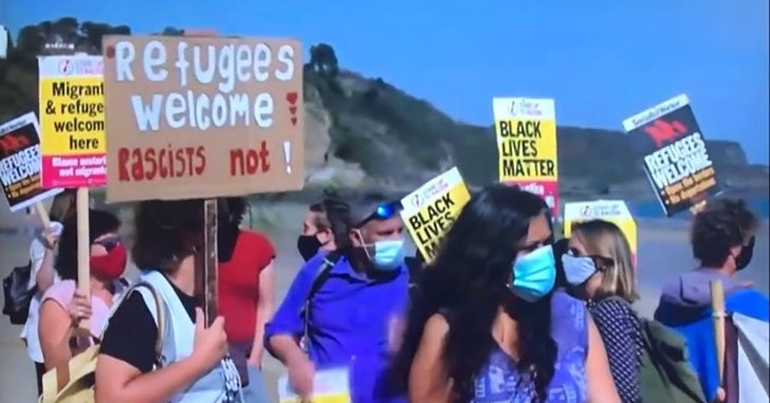 On 15 September, local people in Penally south Wales became aware of the Home Office’s plans to house refugees at a former military training camp. One local person told The Canary that the Home Office’s failure to consult the local community has “given rise to fear, which has manifested itself in some pretty ugly scenes”.

And the far right are attempting to exploit these fears. Since the Home Office’s plans became public, anti-refugee groups have gathered outside the camp and clashed with police. But this hate isn’t going unchecked. Because local people are uniting to show solidarity with refugees.

The Canary spoke to local people and activists who say these far-right groups don’t represent locals. They point out many of the far right have come from outside Penally and Pembrokeshire. Penally resident Naomi Chiffi said:

these hideous far right voices that have come in and sought to divide us, actually what they’ve done is unite us more

Above all, we’d like the refugees to know that they are welcome here and that it’s a small but very vocal minority from outside the area saying otherwise.

Racists and fascists are coming to [Pembrokeshire] from miles away to agitate the situation and stir up their hatred.

In response to such hate, Scott said:

Anti-racist campaigners and local people have publicly expressed solidarity with refugees. On Sunday 20 September, a large group of people met at a nearby beach in Tenby to underline this support. Pembrokeshire resident Hannah V told The Canary she is:

really proud of Pembrokeshire and how Pembrokeshire has reacted to it. I helped with a little bit of beach art last weekend. The response was almost overwhelmingly positive

On 23 September, other people met outside the camp to form a welcome reception. Since then, activists have set up a social media group to accept donations and offers of help for these refugees. And social media group Stand Up to Racism West Wales (SUtRWW) is growing in membership.

the tiny, tiny minority that are spouting hatred is actually driving Pembrokeshire to be more welcoming

Local resident Naomi Chiffi told The Canary the Home Office didn’t consult people before the move. In fact, according to Chiffi, the local community only got official verification of the move around 19 September. The first refugees then arrived on 21 September. Chiffi said:

As a result of the lack of public consultation, these fears have manifested themselves in some horrible [ways]. And adding to that then – because there was no time, because there was no due process or due diligence given to this, or due care for the communities involved – it’s allowed [these] sort of really nefarious horrible right wing, far right groups from outside the County to come in, claiming to speak for the people here, and have turned it into something really abhorrent. They don’t speak for anybody here. I know that for a fact.

And it was this lack of clarity and information that initially led to local groups organising in Pembrokeshire. However, one online group later disbanded saying it was “totally out of control”. There was a concern that “out-of-town violent racists” were taking over.

The Canary contacted the Welsh government for comment. A spokesperson said:

The decision to transfer asylum seekers to the former military camp at Penally was taken by the Home Office without consultation with the Welsh Government, the local community or local services.

Wales is a Nation of Sanctuary. We believe asylum seekers should be welcomed and supported to integrate in their new country. People fleeing war and conflict deserve the best possible start in their new country – being housed in a military base is not the best start. With proper consultation, we could have done much better.

The First Minister wrote to the Home Secretary urging her to delay the transfer of people to Penally to ensure proper planning and services could be put in place. This was declined and instead the camp has become a target for right-wing protests which have exploited the legitimate concerns of the local community.

We continue to work with all partners to ensure concerns are addressed and that crucial public health issues are considered. The general approach from Home Office is simply unacceptable. Its policy needs to improve to make sure people relocated to Wales can be properly looked after and the local community is not disproportionately impacted, and that legitimate concerns of the local communities can be properly addressed.

The spokesperson also noted first minister Mark Drakeford’s responses on this topic in the Senedd on 22 September.

The Canary also contacted the Home Office. A spokesperson said:

During these unprecedented times we have worked tirelessly with local authorities and other partners to provide asylum seekers, who would otherwise be destitute, with suitable accommodation – as we are required to do by law.

Following detailed discussion with local authorities, some asylum seekers will now be housed in contingency accommodation in Kent and Pembrokeshire provided by the Ministry of Defence.

We continue to have daily conversations with stakeholders to address concerns in the local community. We have been clear that we will not tolerate any attempts to fuel resentment towards asylum seekers and we will take all the necessary steps to protect people in our care.

It further stated that more information on asylum accommodation can be found on its website.

Scott says various groups in the county have united to support refugees. These groups, according to Scott, want refugees to understand the far right do not represent local feeling. This campaign of support will continue over the coming days and weeks.